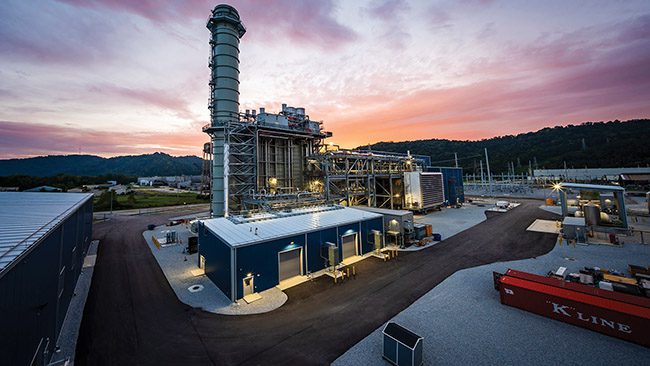 Long Ridge Energy Terminal in Hannibal, Ohio, is one of the first power plants in the U.S. to be purpose-built for generating power with hydrogen fuel. But embarking on the pioneering journey that could ultimately allow the plant’s GE 7HA.02 gas turbine to combust 100% hydrogen by volume hasn’t been easy.

At the end of March 2022, a team comprising Long Ridge Energy Generation, Black & Veatch, GE, NAES, and Long Ridge’s engineering, procurement, and construction (EPC) contractor Kiewit successfully wrapped up a first test to combust an initial blending of 5% hydrogen and 95% natural gas fuel by volume at the 485-MW Long Ridge Energy Terminal combined cycle power plant. The achievement marked a significant step for the project in Hannibal, Ohio, which launched commercial operation in October 2021 as one of the first power plants in the U.S. that was purpose-built to transition from natural gas to hydrogen blends and ultimately be capable of burning 100% hydrogen.

But while the test was significant and its future capabilities are being much-watched, Long Ridge Energy’s long journey in getting the pioneering power plant built may also offer crucial insight for gas power project developers that are considering large-scale hydrogen-ready projects. “I’ll confess that when we started off the project, it seemed like a really simple concept that wasn’t going to take very long to execute, given good partners,” noted Mark Barry, program manager at Long Ridge Energy, during a July GE-hosted webinar. “The closer we got to it, the steeper we realized that the curve was, from codes to materials to control issues. There was a lot to work through. But with our team, it was really a series of engineering problems that you worked through in any project—more of them, and not a lot of them that we thought about really at the beginning.” How the plant resolved these issues and continues its transition to a higher concentration of hydrogen, despite so many unknowns that characterize the burgeoning low-carbon fuel horizon, makes Long Ridge an especially noteworthy POWER 2022 Gas Top Plant.

Why Long Ridge Chose to Be Hydrogen Ready

Long Ridge Energy was formed five years ago by investment firms Fortress Transportation and Infrastructure Investors, and Grosvenor Capital Management—Labor Impact Fund, which saw a redevelopment opportunity at the site of a former aluminum smelter that operated for more than 50 years in the Appalachian Basin. The site is located within a 1,660-acre multimodal facility in the heart of the Marcellus and Utica shale formations alongside other natural gas infrastructure, including two storage tanks and four gas pipelines.

“Really our objective for this project from the very beginning was to develop a digital industry on this large property adjacent to the power plant that could take power from the plant,” said Bo Wholey, president of Long Ridge Energy. “So, we started targeting really large power load industries like data centers but quickly concluded that the market had shifted several years ago and was really very focused on carbon-free generation,” he said. Long Ridge approached GE, and that kicked off a discussion about exploring the potential to transition the power plant to start blending hydrogen, he said.

At the time, GE was intently exploring low-carbon fuels for its gas turbine fleet as part of a pathway to help the power sector combat climate change. In October 2020, the American original equipment manufacturer unveiled a contract with Long Ridge for a 7HA.02 combustion turbine, effectively launching a flagship hydrogen power demonstration for its HA-class gas turbines.

The HA gas turbine, notably, is capable of 50% hydrogen by volume for units with the DLN 2.6e combustion system, which is found on the 7HA.03 (60 Hz)—GE’s newest HA-class model—and the 9HA.01 and 9HA.02 (50 Hz). The 7HA.02 combustion turbine—a model GE debuted in 2017—which has a DLN 2.6+ combustion system, is “innately capable” of burning 15% to 20% hydrogen by volume, explained Dr. Jeffrey Goldmeer, director of Emergency Technologies at GE Gas Power. “The 7HA.02 at Long Ridge has not been modified for hydrogen,” he said. “When we talk about going to 50% or 100% hydrogen, then we’ll start needing to see changes in the combustion system, primarily on the gas turbine, and changes in the balance of plant to handle much more hydrogen.”

While the concept was attractive, integrating it into the plant design with urgency, to meet the commercial operating timeframe of November 2021, proved more challenging, said Barry. “There were a few things—technical, logistical—that we don’t think we really appreciated until we started our working group,” which included GE, Black & Veatch, and Kiewit. Holding the authority to make decisions at a group level, for example, to simplify the design criteria and forego blending hydrogen at below 60% load, provided crucial project alignment, he said. It also allowed the team to address emerging supply chain constraints and rising prices for specialty items, such as stainless steel valves and piping. “We had to act quickly and grab things or commit to things when we could,” he said.

Permitting the novel project also prompted some issues. Barry said the Ohio Power Siting Board was “extremely interested” in the project; it has monitored the volume of hydrogen the project has combusted in tests. Part of the issue stems from a general lack of awareness by energy regulators about existing codes and standards that exist for industrial hydrogen use.

While the team didn’t see any changes in the plant’s operating parameters when running the turbine at 5% hydrogen (Figure 1), future tests promise to shed more light on technical challenges. Transitioning to higher concentrations of hydrogen may “bring a new set of unknowns,” he said. Barry, however, noted that a key takeaway from the experience is that designing and building a purpose-built plant “makes a whole lot more sense than coming back for retrofit later.”

Another substantial hurdle was securing adequate hydrogen fuel supply, particularly for the first-fire test. On an hourly basis, the 7HA.02 consumes more than 100,000 cubic feet of hydrogen. While Long Ridge has access to industrial byproduct hydrogen nearby and had it trucked in on tube trailers for the test, a supplier maintenance outage during the testing period underscored “how big the supply problem” can be, Barry said.

Reliable hydrogen supplies as fuel for gas turbines will likely endure as a long-standing challenge. Costs are another concern. Wholey said Long Ridge’s efforts to secure larger quantities for further testing will rely on lowering the hydrogen cost. “A big component of hydrogen cost is transportation and storage,” he said. While Wholey is optimistic that recently announced U.S. government initiatives to develop hydrogen hubs may alleviate the issue somewhat, the necessary hydrogen infrastructure may not be fully built-out for several years.

“The obvious solution is to make hydrogen onsite, next to the power plant,” he said. For now, the company has several options. While it can produce green hydrogen with electrolysis using water from the Ohio River, wind and solar in eastern Ohio don’t produce as much power as in the West. “I think that those locations are probably better suited for making green hydrogen since solar can be fairly cheap,” he said.

“We sit right next to one of the largest gas pipeline hubs in the world, Clarington Hub, and so in this location, blue hydrogen and other ways of making hydrogen are better suited.” However, the company continues to explore other hydrogen production methods, including methane pyrolysis and even breaking down recycled aluminum to create hydrogen from the process. “That may be ironic, given the history of the site as an aluminum smelter,” Wholey said. “The way we’re thinking about the site that we own is almost as a hydrogen incubator, creating a number of different pilot projects and scaling them over time to make hydrogen onsite.”

Meanwhile, the site also offers good long-term storage prospects, Wholey noted. “We’re fortunate at Long Ridge that the geology is suitable for hydrogen storage. And what I mean by that is we have a fairly thick layer of salt that runs throughout this area. Caverns can be leached in that salt, which is really one of the most cost-effective ways for large-scale hydrogen storage,” he said.

For Wholey, a more treacherous “unknown” relates to the market component of power generation from hydrogen. “Specifically, what is the revenue opportunity from running an existing generation unit on hydrogen?” he asked. While the market is moving to value reliability and sustainability, cost competitiveness continues to pose a challenge. “But hydrogen is still so new in terms of large-scale generation, and we believe that first we need to show the market that it’s possible. And now that we’ve done that, that has really helped kickstart some of our discussions with large companies, for example, that have targets to be emissions-free, in some cases on a 24/7 basis.”

Wholey suggested that industry should approach value proposition from the standpoint that hydrogen power, a decarbonized dispatchable asset, complements wind and solar both as a balancer and as storage. “The way we think about cost should really be compared to long-term battery storage,” he said. Currently, however, no real policy or market advocacy exists because hydrogen power is so new.