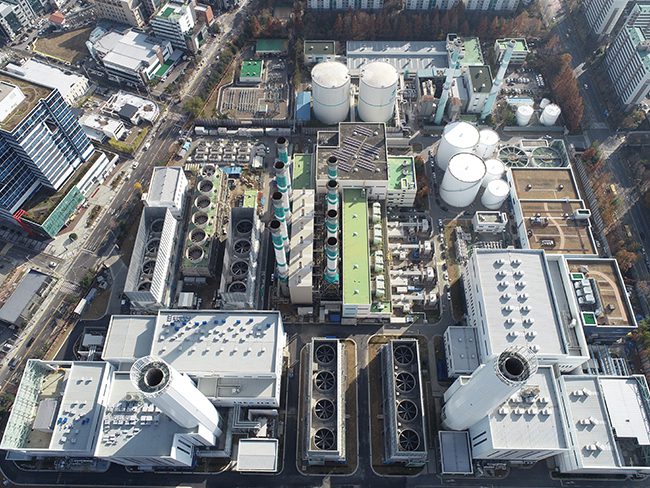 A combined heat and power (CHP) plant in South Korea successfully completed a project to improve its output and overall operation, with updated gas turbine technology supporting its reliability.

South Korea has been at the forefront of innovation across a range of industries. The country is known for its leadership in the design of electronics, and for driving the transformation of energy through a variety of technologies.

South Korea, like many other countries, is dependent on fossil fuels to power its energy sector, and has a long-term goal to increase its use of renewable power resources. Gas-fired power generation is a bridge to that goal, in part to provide reliable power to balance the variability of renewables. South Korea’s densely populated areas use district heating and cooling systems to reduce carbon emissions, relative to the cumulative emissions from individual heating and cooling systems.

The Anyang project is one of those CHP systems, and improves power output and efficiency. The upgrades at the facility include the renewal of older gas-powered assets with the latest turbine technology, including a GE 7HA.02 gas turbine, with an H65 generator, one STFD650 steam turbine with an A39 generator, all controlled with a Mark* VIe Distributed Control System (DCS) software solution. GE is providing services to support the availability and reliability of the plant.

The updated unit now delivers about 500 MW of electricity, while also providing steam for district heating for more than 180,000 residents of Anyang City. The Anyang plant connects to Korea’s direct heating system, or DHS, a centralized system that distributes heat to residential developments since the 1990s. The Anyang CHP plant is a worthy recipient of a POWER Top Plant award.

Dongkook Ha, project manager for GE Power, noted the company led upgrades for Unit 2-1 at Anyang from 2015 to 2018, and that experience helped the Unit 2-2 project. “During the upgrade period, the existing power plant continued to operate,” said Ha. “The actual power and heat load was borne by the new power plant, and the existing power plant was operational when more electricity was needed at the peak of summer, and when heat supply was insufficient in the winter.”

GS Power in a news release said, “Following GE’s successful modernization of Anyang CHP Unit 2-1, we chose to continue to partner with GE for the success of the second unit renewal project to support our efforts in delivering more sustainable and more efficient combined heat and power to homes and businesses in the Anyang region. We trust in GE’s technology to help us in meeting the energy and heating needs of our communities in Anyang City, while reducing our plant’s carbon footprint. This project is also contributing towards the country’s goal laid out in the government’s Green New Deal to achieve carbon neutrality by 2050.”

Commercial operation of the Unit 2-2 project came one week ahead of its original schedule, despite challenges from the coronavirus pandemic, and what project officials called “extraordinary” heavy rains and typhoons that disrupted transportation of equipment and threatened to delay the upgrade.

“The project addressed unprecedented challenges during the construction phase,” said Ha. “As COVID-19 pandemic infection rates climbed rapidly in the country, restrictions on travel reduced the availability and mobilization of resources. Transportation of power generation equipment was also challenged by extraordinary heavy rains during the typhoon season.

“Although this posed a significant challenge in bringing the plant in operation, the plant achieved commercial operation one week ahead of schedule through the use of a modular-based construction process—where large parts of the plant were manufactured and shipped already assembled to the construction site and the successful collaboration with GS Power and FieldCore, GE’s field services company,” said Ha.

The Anyang plant is an important part of South Korea’s DHS. The Unit 2-2 utilizes GE’s STF-D650 steam turbine, which has been designed to supply steam for district heating needs and power for electricity production. GE officials said the steam turbine has “exceptional operational flexibility as it can respond to a variety of needs for district heating and power production, delivering energy savings and reductions in CO2 [carbon dioxide] and NOx [nitrogen oxides] emissions.” 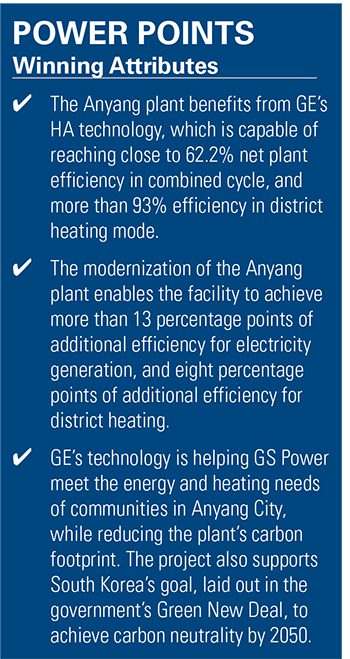 The DHS was designed to support energy efficiency on a national level in South Korea. The country has utilized GE’s experience and technology in other district heating applications, including in GS Power’s combined cycle power plant Unit 2-1 in Anyang. Unit 2-1 features GE’s first HA gas turbine delivered to and commercially operated in Korea. Other plants using GE technology include Naepo’s CHP plant in Naepo City; the Korea Southern Power, or KOSPO, CHP plant at Sejong City; and the Oseong CHP plant in Pyeongtaek.

GE’s gas turbines, in both simple and combined cycle configurations, have been installed in nearly 80 units in South Korea, according to the company, with generation capacity of more than 14 GW. GE has worked in South Korea since 1976.

Jacqueline Polukort, steam turbine product manager at GE Power, provided POWER with information about the equipment at the Anyang plant. “GE’s steam turbines are at the center of flexible high-efficiency combined heat and power application solutions,” said Polukort. “For the Anyang district heating plant, the STF-D650 steam turbine is applied in two blocks of 1×1 7HA.02 multi-shaft configuration with a three-pressure reheat cycle designed for multiple modes of operation.”

“For optimal bottoming cycle and district heating performance and flexibility, the STF-D650 has two extractions and a clutched LP [low-pressure] section,” added Polukort. “The two extractions are from the intermediate-pressure [IP] turbine section and cross-under piping. The valve placement in the cross-under piping allows the STF-D650 to toggle between isolation and throttling of the low pressure for maximum extraction control. The clutched LP section of the STF-D650 allows the operator to divert all the LP section steam to the district heater.