A reusable organic liquid developed by the U.S. Department of Energy’s Pacific Northwest National Laboratory (PNNL) to remove carbon dioxide (CO2) or sulfur dioxide (SO2) from power plant emissions could one day replace current scrubbing methods and allow power plants to capture the gases in a cost-efficient way that uses no water and less energy.

"Power plants could easily retrofit to use our process as a direct replacement for existing technology," said David Heldebrant (Figure 1), PNNL’s lead research scientist for the project, this August. 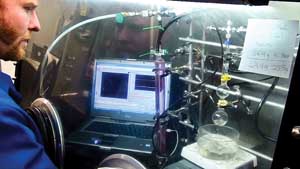 1.     An acid scrub. Pacific Northwest National Laboratory scientist David Heldebrant works to capture sulfur components and CO2 from test emissions streams in a process called reversible acid gas capture. The process could one day replace current gas-scrubbing methods while increasing the amount of the gases captured in a cost-efficient way that uses no water and less energy. Source: PNNL

The new scrubbing process works to remove CO2 or SO2 — "acid gases" — with acid gas – binding organic liquids that contain no water and appear similar to oily compounds. These liquids capture the acid gases near room temperature. Scientists then heat the liquid to recover and dispose of the acid gases properly.

The recyclable liquid requires much less energy to heat but is said to hold two times more of the gases by weight than the current leading liquid absorbent (a combination of water and monoethanolamine) used in power plants to capture SO2 and in pilot projects to capture CO2. That basic organic molecule grabs the CO2. "Current methods used to capture and release carbon dioxide emissions from power plants use a lot of energy because they pump and heat an excess of water during the process," said Heldebrant. He noted the monoethanolamine component is too corrosive to be used without the excess water.

In PNNL’s process, called "reversible acid gas capture," the molecules that grab onto the acid gases are already in liquid form and don’t contain water. The acid gas – binding organic liquid requires less heat than water does to release the captured gases.

Heldebrant and colleagues demonstrated the process in previous work with a CO2 -binding organic liquid called CO2 BOL. In this process, scientists mix the CO2 BOL solution into a holding tank with emissions that contain CO2. The CO2 BOL chemically binds with the CO2 to form a liquid salt solution.

In another tank, scientists reheat the salt solution to strip out the CO2. Nonhazardous gases such as nitrogen would not be captured and would be released back into the atmosphere. The toxic compounds would be captured separately for storage. At that point, the CO2 BOL solution is back in its original state and ready for reuse.