Italy’s largest energy company, Enel, is gearing up to build an innovative hydrogen-fueled combined-cycle power plant — the first of its kind in the world — in Fusina, near Venice, in the Veneto region of Italy.

The €47 million plant is under construction at the site of Enel’s "Andrea Palladio" Fuina plant, a 960-MW coal-fired facility adjacent to the Porto Marghera petrochemical plant (Figure 4). Enel expects that when completely on-line in June 2010, it will produce 12 MW through the combustion of pure hydrogen — supplied as a by-product by the petrochemical plant — in a gas turbine with 43% efficiency. 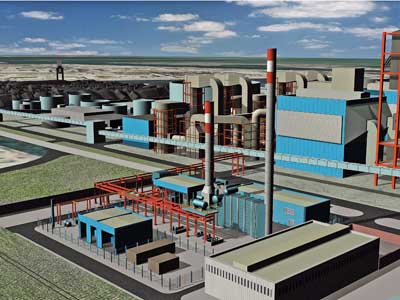 4. Hydrogen power. An artist’s rendering shows a 12-MW hydrogen-fueled combined-cycle power plant that Italy’s Enel is planning to build at an existing coal-fired facility near Venice. The first industrial-scale project of its type, the plant will use a GE gas engine to combust pure hydrogen supplied by an adjacent petrochemical plant. The project is expected to be completely on-line by June 2010. Courtesy: Enel

Developed in association with General Electric, the gas turbine operates with a turbine inlet temperature of approximately 1,070C (1,958F) and is equipped with a newly developed combustion chamber. With the innovative approach used for fuel and air injection, the combustion of hydrogen significantly reduces NO x emissions compared with burning conventional fossil fuels, Enel says. The efficiency of the cycle is further increased by exploiting the exhaust gas to generate high-temperature steam, which will then be sent to the existing coal-fired plant, where it will produce an extra 4 MW of power.

The Fusina coal plant was the first Italian generation plant in 1997 to be equipped with desulfurization and denitrification systems. In 1999 it was fitted with a baghouse to reduce particulate emissions, and since last year, it has been upgraded with new environmental systems.

Enel has already conducted a demonstration in the first phase of the project to verify that the existing 12-MW gas turbine would operate correctly using pure hydrogen as fuel. The demonstration also provided data on the safety aspects and control technologies required for the efficient combustion of the gas. The company hopes to optimize combustion technology, paying attention to the plant’s NO x emissions, in the project’s second phase.

Company officials inaugurated the construction worksite in April this year. Final design of the plant has been completed, and public statutory permission for construction has been obtained. In October, Texas-based Invensys Process Systems said that after fighting off "stiff competition within the power market," it had been selected to supply the plant’s control and automation technology.

The plant is one of several projects of Hydrogen Park, a consortium formed in 2003 at the initiative of the Venice Industrial Union, the region of Veneto, and the Ministry of Environment. The consortium seeks to promote the development and application of hydrogen technologies in transportation and electricity generation in the Porto Marghera area. Enel said that in the future, the hydrogen needed to fuel the plant could also be obtained from the gasification of coal associated with carbon dioxide capture.