Though an abundant supply of freshwater has been taken for granted in many parts of the world, its availability is becoming less certain, even in North America. Water is a valuable resource and commodity that needs to be efficiently managed to minimize waste, reduce energy consumption, and control cost, especially for power generation. The industry must respond by seeking out more efficient ways to use water, such as by implementing water recycling and reuse strategies, especially for critical equipment like cooling towers.

The purpose of a cooling tower is to conserve water. It fulfills its purpose by rejecting heat to the atmosphere by convective and evaporative heat transfer. As water cascades through the cooling tower, it comes into contact with air that is pushed or pulled through the fill by mechanical draft fans. Some of the waste heat is transferred from the warmer water to the cooler air by convection. The remainder of the heat is removed by evaporation of a small percentage of the recirculated water. The evaporation rate is determined by the following equation:

To prevent the tower from overconcentrating minerals, a percentage of the cooling water is discharged to drain. The bleed or blowdown rate is adjusted to control the concentration of dissolved minerals to just below their solubility limit. This limit is commonly set and controlled by specific conductance (micromhos/cm) or total dissolved solids (mg/l) measurements.

The water that is lost by evaporation and bleed must be replaced by fresh makeup to maintain a constant system volume. Makeup is typically obtained from potable water sources, but it may also come from treated wastewater or recycled water supplies (Figure 7): 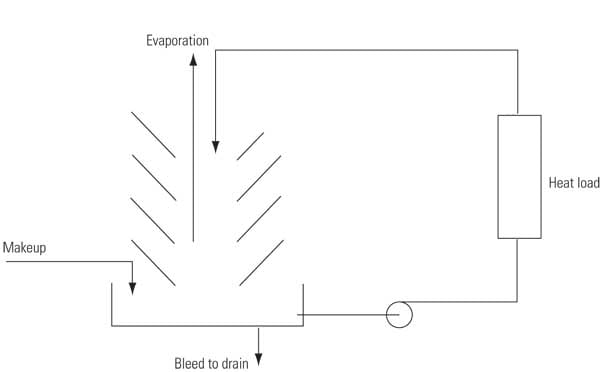 One indicator of cooling tower efficiency is cycles of concentration, or concentration ratio. This is the ratio of the makeup rate to the bleed rate, MU/B, assuming the uncontrolled losses are negligible.

Cycles of concentration are also estimated by the ratio of the specific conductance of the cooling water and the makeup water:

From these relationships, the amount of bleed required to maintain a specific cycle of concentration is determined by:

If E is held constant, reducing the bleed causes the cycles to increase. Conversely, increasing the bleed causes the cycles to decrease. Operating the cooling tower at maximum cycles of concentration reduces the amount of water sent to drain and thereby decreases the freshwater makeup demand. Overall, higher cycles of concentration translate into greater efficiency as measured by a decrease in freshwater consumption and wastewater discharge (Figure 8). 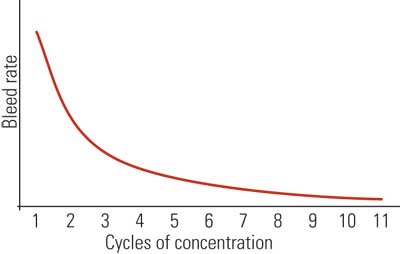 The diminishing returns curve (Figure 8) indicates that major gains in water conservation can be achieved by increasing the cycles from two to three. As we approach higher cycles, however, the incremental gains decrease. From a practical view, windage, leaks, and other uncontrolled losses limit the cycles to a maximum of about 10. This is a reasonable goal for most cooling towers and would further suggest that cooling towers operating below 10 cycles of concentration are less than 100% efficient as measured by makeup consumption and wastewater generation (see table). 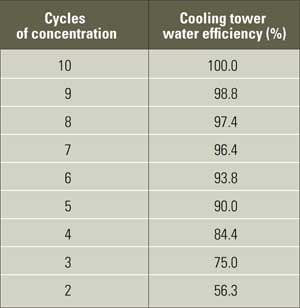 These figures suggest that cooling towers that operate at fewer than five cycles of concentration (less than 90% efficient) are not achieving their full potential and would benefit from retrofits that would reduce freshwater consumption and decrease waste. Towers operating at six to eight cycles are acceptable for most applications. Towers in the nine- to 10-cycles range have reached their peak. Achieving more than 10 cycles would be difficult while deriving a reasonable return on investment, unless zero discharge is the ultimate goal.

Cooling tower cycles can be maximized in a variety of ways. These include pH adjustment, chemical scale inhibitors, and pretreatment of the tower makeup.

PH Adjustment. Traditionally, cooling towers operating on high-hardness, high-alkalinity makeup water utilized pH adjustment with sulfuric acid to maximize cycles of concentration. One part of 66° Baume acid is required to neutralize one part of alkalinity. Sufficient acid is injected into the makeup to maintain the total alkalinity of the cooling water in the range of 50 to 100 ppm or at a level that will maintain the pH within the range of 6.8 to 7.5. The Langelier, Ryznar, or Practical scaling index is used as an additional control measure to correlate the calcium hardness, total alkalinity, pH, total dissolved solids, and temperature to maintain water chemistry at the neutral point of the index (neither scaling nor corrosive).

The problem with using acid to increase cycles is one of control. Accidental overfeed conditions (low pH) make the cooling water very corrosive to system metals. And reducing the M alkalinity removes the natural passivating effect that carbonate and bicarbonate alkalinity have on steel. Operating the cooling tower at pH levels above 8.5 creates an environment that passivates steel and minimizes corrosion of galvanized steel and copper.

Unlike scale deposition, which can be removed by chemical or mechanical cleaning, damage caused by acid corrosion cannot be reversed and is very expensive to repair. In addition, the handling, transporting, and feeding of concentrated sulfuric acid creates additional environmental, health, and safety issues.

Chemical Scale Inhibitors. Various chemical additives and formulations are marketed that enhance the solubility of calcium and magnesium salts while at the same time controlling corrosion to within acceptable rates. These chemicals are generally phosphonates (organically bound phosphate compounds), polymers (mono-, co-, and ter-), and organic corrosion inhibitors. These products are used alone or in combination with supplemental acid feed to maximize tower cycles.

Proven effective in lab tests and in the field, cooling water additives are usually limited to keeping calcium and magnesium salts soluble up to a Langelier Index value of about +2.5. Other chemical programs push through the calcium solubility limit by claiming to maintain clean heat transfer surfaces at even higher cycles, despite the precipitation of hardness salts, which are chemically conditioned into a fluid, nonadherent sludge that is removed by routine bleed.

Notwithstanding the benefits of a sound chemical treatment program, if the cooling tower cycles are limited to fewer than five, significant water savings can be realized by improving the quality of the tower makeup.

Hardness reduction or removal can be accomplished by lime softening, sodium ion exchange (water softener), or reverse osmosis. Low-hardness makeup is often available from recycled and reused plant wastewater such as spent rinse water and steam condensate. Water of any desired hardness can be obtained by the controlled blending of softened water with untreated raw or recycled water.

As a simple example, a cooling tower handling a 1,000-ton load operating at 3.5 cycles of concentration with a 12F temperature drop across the tower has a makeup demand of 61,775 gallons per day (gpd). Increasing the cycles to eight has the effect of decreasing the makeup demand to 50,400 gpd. This reduces the makeup requirement by 18.4%. The wastewater produced by the cooling tower decreases from 17,640 gpd at 3.5 cycles to 6,336 gpd at eight cycles, which is equivalent to a 64% decrease. And by using less water, chemical treatment consumption and disposal requirements are proportionately reduced.

Potential cost savings vary from plant to plant, depending on the cost for raw water, waste disposal costs, chemical treatment dosages, and energy. Nevertheless, in addition to the environmental, health, and safety improvements, the return on investment for improving cooling tower efficiency is typically less than one year.