Chances are you have endured the tedious process of removing fuel piping when maintaining just about any gas turbine, especially aero-derivative engines that are usually swapped out rather than repaired in place. One of the most time-consuming jobs after reassembling the fuel piping is checking for leaks at all the flanges. In a large frame-size turbine, that means sealing up to 64 flanges and then removing the seals after the leak testing.

The conventional approach to sealing the pipe flanges is to use masking, duct, or aluminum tape around each flange in the fuel system and then punch a small hole in the tape. The fuel system is then pressurized, and a technician "sniffs" the hole for any signs of the combustible gas.

The down side of this approach is that the tape must then be removed — after it has been baked in place during testing (Figure 4). Removing the tape is an expensive, time-consuming, and thankless process, because a technician will inevitably spend hours scraping the tape from each flange when leak testing is complete. It you don’t scrape it right away, the problem will only intensify during the next round of leak tests, because the baked-on tape remnants make forming an air-tight seal impossible. And it’s always possible that tape remains make their way into the fuel system piping during the next fuel system piping disassembly. 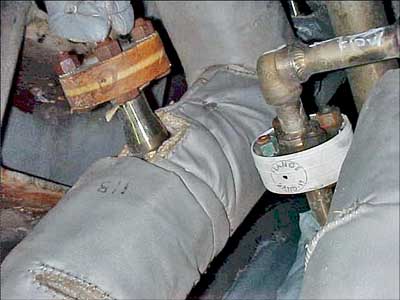 Joplin-based Flange-It LLC recently introduced Flange Band-It, a new product that makes scraping tape just a bad memory. When you read how simple this solution is, you’ll wonder why you didn’t think of it yourself. In essence, a flexible elastomeric polymer that can withstand temperatures up to 500F — a large rubber band so to speak — takes the place of the tape on virtually any standard-size flange (Figure 5). 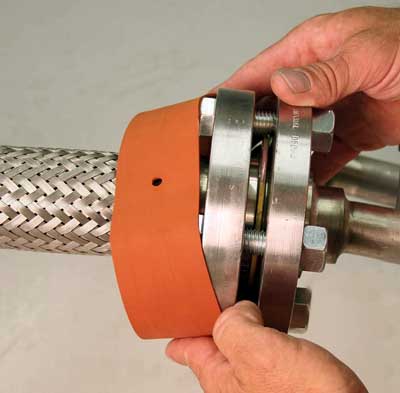 The potential time savings are considerable. If it requires 30 minutes per flange to apply tape to a frame-size turbine, then that’s a savings of perhaps 30 man-hours. During a recent outage, one user reported saving another 96 man-hours cleaning tape from flanges when using Flange Band-It seals.

Not only does Flange Band-It simplify the leak detection process, but it also allows highly trained technicians to focus on important start-up tasks rather than menial chores like scraping off well-done tape (Figure 6). 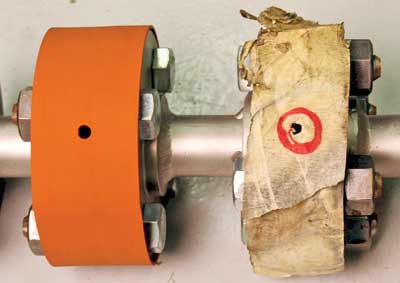 6. Big timesaver. t’s a waste of valuable technician time to scrape tape from flanges—perhaps as much as 15 man-days during a frame turbine outage. Courtesy: Flange Band-It LLC