A twist on an old technique, flue gas recirculation, helps prevent slagging in the upper furnace and convective pass, according to pilot testing recently completed by APTECH CST and the Southern Research Institute. The technology—along with a companion technology for furnace sorbent and urea injection for SO2 and NOx control—could help owner/operators of smaller, older coal-fired plants meet emissions limits at a reasonable cost.

Last year, POWER described APTECH CST’s novel technology that promised significant reduction in key air emissions (see April 2007 “Focus on O&M”); the company said that at least 50%, and possibly up to 80%, reduction in SO2 and NOx could be achieved. In this article, we review the details and results of initial pilot-scale testing. The results met all of the company’s expectations when testing Powder River Basin (PRB) and Galatia coals. Testing continues, and a full-scale project is planned for operation in 2009.

Air pollution control authorities worldwide continue to tighten power plant and industrial boiler emission standards for SO2 and NOx emissions, and U.S. federal regulatory proposals for controlling mercury, although recently placed in limbo by the courts (see POWER, September 2008, “EPA’s air program: Still hazy after all these years”), are sure to have a return engagement next year. As a result, the need for increasingly effective—and cost-effective—control technologies is a given.

Sulfur in the fuel is the source of sulfur oxides. The combustion process unavoidably results in the production of sulfur dioxide (SO2) and sulfur trioxide (SO3). The favored approach for reducing sulfur emissions is either to burn low-sulfur coal (thus reducing, but not eliminating, emissions) or pass the flue gas through scrubbers using flue gas desulfurization (FGD) technology.

But current FGD technologies are expensive—$300 to $450/kW is becoming the norm (see POWER, July 2007, “What’s that scrubber going to cost?”)—and often cost more than the original plant. FGD units also have a relatively large footprint, and, in the case of wet FGD, an additional land commitment is needed for the ponding, storage, and stabilization of FGD by-products. Some plants are under the gun to install an FGD, but they just don’t have the space available. 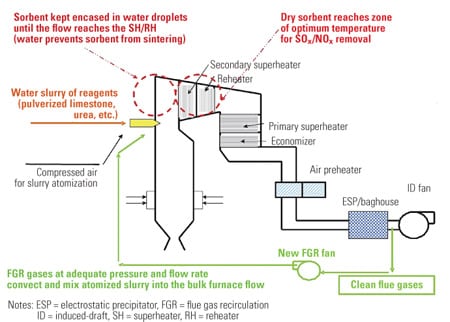 1. Injection and recirculation are the keys. Generalized arrangement of a boiler outfitted with APTECH CST technology. Actual configuration is based on site- and fuel-specific parameters. Source: APTECH CST

Staging and limiting peak flame temperatures by installing low-NOx burners and/or recirculating flue gas to the burners is the favored approach for limiting the production of NOx in coal-fired boilers. Though this approach does achieve a limited reduction in NOx, it is lacking when fuel flexibility and other future requirements are considered.

Selective noncatalytic reduction (SNCR) involves the injection of urea or ammonia into the flue gas to remove NOx, achieving up to 50% NOx removal. When SNCR is not enough, selective catalytic reduction (SCR), at a cost of perhaps $200 to $300/kW (see POWER, Jan./Feb. 2006, “Estimating SCR installation costs”), must be used.

There are numerous vendors in the field of SO2, NOx, and mercury control, but none has offered an effective, low-cost technology to simultaneously remove all three pollutants from industrial and small to midsize utility boilers—until now, thanks to APTECH CST’s patented and patent-pending technologies for emissions reduction (CST is short for Clean Stack Technologies).

APTECH CST’s technologies use a small, clean recirculating stream of flue gases, taken after the baghouse or electrostatic precipitator (ESP), to insert and distribute an atomized slurry solution of sorbent compounds (for example, calcium compounds and urea for SO2 and NOx control, respectively, and activated carbon for mercury) throughout the furnace prior to entry into the boiler convective pass ducting (Figure 1). The emissions reduction goals APTECH CST has set for the program are significant (see box), yet the first pilot testing results are extremely encouraging.

To optimize sorbent use, specially designed registers ensure complete distribution and mixing of the atomized slurry with the main flue gas flow. Slurry flow rates through different injection ports are adjusted to correspond with the concentration distribution of pollutants across the furnace. The water droplets are sized to encapsulate and cool the sorbent until the sorbent particles reach the location of optimal temperature in the boiler and optimal reaction kinetics for the removal of gaseous pollutants. No external structures or units are needed, as is the case for current FGD and SCR technologies.

The Combustion Research Facility (CRF) at Southern Research Institute, where these tests were conducted, is shown in Figure 2. Its furnace is a vertical, up-fired, 8.5-meter-high cylinder, with an inner diameter of 1.07 meters. This allows gas velocities of 3 to 6 meters per second and residence times of 1.3 to 2.5 seconds, depending on the firing rate. To obtain furnace temperatures that are representative of full-scale boilers, as well as stable and reproducible, the furnace is both refractory-lined and water-cooled. The temperature/time history of the CRF mimics that of full-scale power plants from the burner through the economizer (Figure 3). 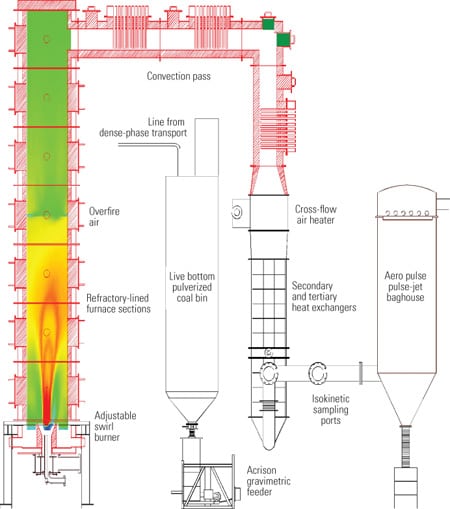 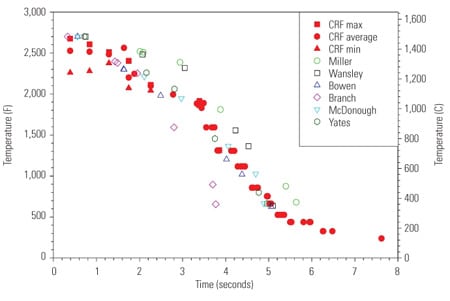 Southern Research Institute’s CRF employs not only a pilot-scale coal-fired steam generator but also all the necessary auxiliary systems and instrumentation to properly test any combination of sorbents, reagents, and coals.

Figure 4 illustrates the various air and slurry injection options available at the Southern Research Institute CRF when using PRB coals, including the nominal location for the injection nozzle. In practice, the entire slurry probe was moved up, down, or rotated to attempt to optimize injection variables. Data gathering began after a suitable location was found. For these tests, the following configuration was used: 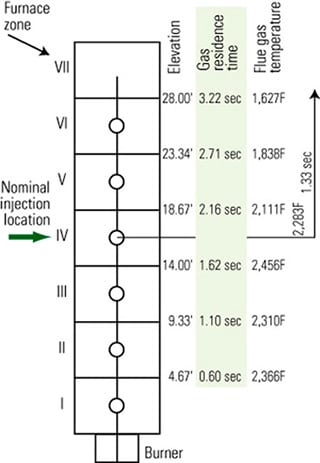 A 1-hour baseline test was used to establish the levels of SO2 and NOx at the beginning of each testing day. After benchmarking the pilot plant, a series of tests were conducted according to the test plan. 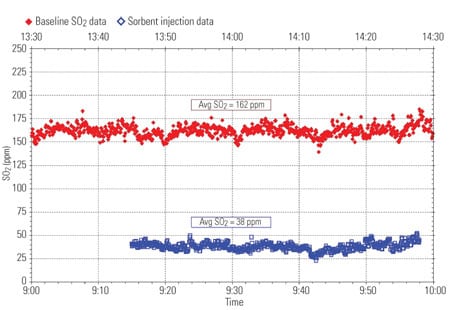 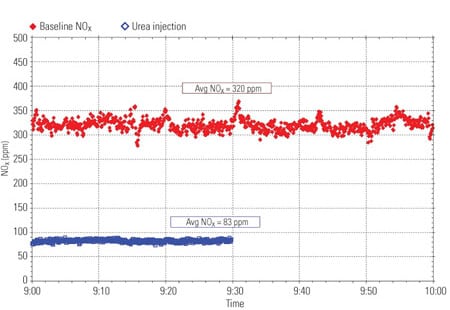 The testing with Galatia coal was more limited in scope but did display consistent results. Excluding runs of 10 minutes or less in duration, the average reductions of SO2 over three independent runs varied from 55.0% to 59.5%. A single nozzle location and orientation were used for these runs. The average reductions in NOx over three independent runs varied from 34.5% to 59.3%. Limestone sorbent and urea were used together for all these runs. Figure 7 shows the results of the sorbent/urea injection test. 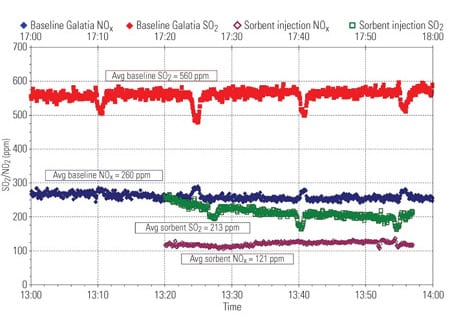 Testing with lime sorbent proved problematic with both coals using the laboratory-scale nozzles because of frequent plugging of the small nozzle and erratic flow rates. Full-scale nozzles will not exhibit the same behavior if properly selected and installed.

APTECH CST has received a contract for a preliminary engineering study leading to a full installation of its technology for SO2, NOx, and mercury control at a utility power plant. This installation should be operational by the summer of 2009. After APTECH CST’s technology is installed at the plant, the existing wet scrubber will be eliminated, storage ponds will be removed from service, and there will be no further discharge of treated wastewater to a nearby river.

APTECH CST is also developing a testing and engineering protocol for new projects. This involves a combination of computational fluid dynamics and cold-flow testing to optimize the location and characteristics of the slurry injectors.

APTECH CST also plans to optimize the various ratios (such as Ca/S for SOx and NSR for NOx) by fully employing pilot-scale testing at Southern Research Institute. Because every coal has different combustion properties, Southern Research Institute can effectively simulate the burning temperature/time profiles for commercial boilers in its pilot plant. A number of state-of-the-art instrumentation technologies will be used, including the Infra-View Wireless Boiler Thermometer (www.jnt-tech-serv.com), a passive infrared detector based on the CO2 absorption spectrum suitable for external installation on boilers, to measure flue gas temperatures inside operating boilers and pilot plants.

Once optimized ratios have been established, the company will proceed with engineering of the complete installation. APTECH CST has received a contract for the engineering phase and a portion of the simulation phase for another power plant to control SO2 and NOx emissions to meet both current and future federal and state requirements.