In early August, a special transport departed from Voith Siemens Hydro’s Heidenheim workshop bearing the company’s 300-ton, 300-MVA hydro motor-generator back to Schluchseewerk AG’s Wehr pumped-storage station in Germany’s Black Forest. One of the largest machines of its kind in Europe, the hydro generator had been sent to Heidenheim for refurbishment last year. Having been in operation since 1976 at the 1,000-MW Wehr station, a crucial power plant in southwest Germany, the machine had needed a modern overhaul.

It was Voith Siemens Hydro’s first project at Heidenheim. The facility’s workers fitted the machine with a newly manufactured generator stator, and then they proceeded to give it its final high-voltage test. In this test, the stator windings’ insulation (Figure 7) had to withstand 45,000 V—more than twice the rated voltage during operation. The test was successful. 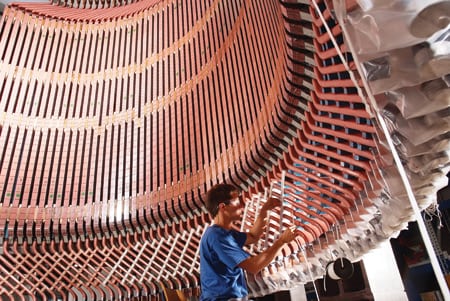 The machine also passed Schluchseewerk’s customer acceptance test. Voith said that Schluchseewerk has put in for overhauls of three more units from the Wehr plant. The companies have also negotiated an additional contract to rehabilitate the second motor-generator; Voith expects work on this project to begin in 2009.

Voith said that the generator poles of the first unit are currently in Heidenheim being overhauled. The like-new motor-generator will be reinstalled at the Wehr pumped-storage plant soon, to be recommissioned in early 2009.