Anyone who has walked barefoot across a parking lot on a summer afternoon knows that blacktop is exceptionally good at soaking up the sun’s warmth. Now, a research team at Worcester Polytechnic Institute (WPI), funded by Massachusetts-based Novotech Inc., has found a way to use that heat-soaking property for an alternative energy source: Through asphalt, the researchers are looking to develop a solar collector that could turn roads and parking lots into ubiquitous—and inexpensive—sources of electricity and hot water.

The project isn’t as wacky as it sounds. In the Netherlands, civil engineering firm Ooms Avenhorn Holding BV has actually implemented a similar system. However, unlike the WPI project, the Road Energy System is designed specifically to collect heat. It consists of a latticework of flexible water pipes, held in place by a plastic grid and covered by asphalt, which magnifies the sun’s thermal energy. So far, the Road Energy System—deemed too expensive and inefficient for large-scale implementation—has been installed in a small parking lot to heat a 70-unit four-story apartment building. It also heats a 160,000-square-foot industrial park and, using runways, it keeps a facility hangar warm for the Dutch air force.

“Asphalt has a lot of advantages as a solar collector,” WPI Project Director Rajib Mallick, an associate professor of civil and environmental engineering, says. “For one, blacktop stays hot and could continue to generate energy after the sun goes down, unlike traditional solar-electric cells. In addition, there is already a massive acreage of installed roads and parking lots that could be retrofitted for energy generation, so there is no need to find additional land for solar farms. Roads and lots are typically resurfaced every 10 to 12 years and the retrofit could be built into that cycle. Extracting heat from asphalt could cool it, reducing the urban ‘heat island’ effect. Finally, unlike roof-top solar arrays, which some find unattractive, the solar collectors in roads and parking lots would be invisible.”

Mallick and his research team studied the energy-generating potential of asphalt using computer models and by conducting small- and large-scale tests. The tests were conducted on slabs of asphalt in which were embedded thermocouples, to measure heat penetration, and copper pipes, to gauge how well that heat could be transferred to flowing water. The team envisions that hot water flowing from an asphalt energy system could be used “as is” for heating buildings or in industrial processes, or it could be passed through a thermoelectric generator to produce electricity (Figure 8). 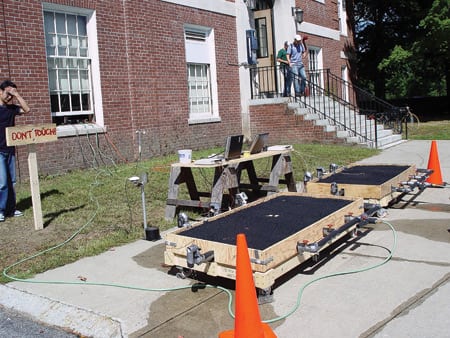 The tests showed that asphalt absorbs a considerable amount of heat and that the highest temperatures are found a few centimeters below its surface. This is where a heat exchanger would be located to extract the maximum amount of energy. Experimenting with various asphalt compositions, they found that the addition of highly conductive aggregates, like quartzite, can significantly increase heat absorption, as can the application of a special paint that reduces reflection. Mallick says the team concluded that the key to successfully turning asphalt into an effective energy generator will be to replace the copper pipes used in their tests with a specially designed, highly efficient heat exchanger that soaks up the maximum amount of heat absorbed by asphalt.

In mid-August, a team member presented the results of research aimed at evaluating the potential for transforming stretches of asphalt into a cost-effective energy source at the annual symposium of the International Society for Asphalt Pavements in Zurich, Switzerland. The study looks not only at how well asphalt can collect solar energy but also at the best way to construct roads and parking lots to maximize their heat-absorbing qualities.

The prospects look good for the team—if not the economy. In the past year alone, the cost of asphalt—an oil-based product—has more than doubled and is devastating infrastructure plans all over the U.S. And it’s only being made worse by a Sept. 5 report that the federal highway fund will just about run of money by the end of the month.