A utility evaluated various methods of obtaining a NOx reduction of at least 30%, as required by upcoming regulations for its boiler, which originally produced 0.54 lb of NOx/million Btu at 410 MW full load. Nalco Mobotec engineers performed a computational fluid dynamics (CFD) simulation of the boiler to first understand the boiler’s combustion process and then determine the most economical method to achieve the required NOx reduction.

Nalco Mobotec’s Rotamix selective noncatalytic reduction (SNCR) system injects urea into the furnace, using a boosted air delivery system to transport urea deep into the furnace flue gas cross-flow. The key to an economical installation is to minimize the number of injection ports while obtaining a good concentration of urea in the areas where NOx is concentrated.

The Riley rear-wall-fired boiler was originally designed to burn oil, so when it was converted to fire eastern bituminous coal, there was insufficient residence time for coal combustion. The unit routinely has upper furnace post-combustion, superheater tube temperature alarms, high CO, and overall poor combustion. In the past, 28 Babcock & Wilcox low-NOx burners were installed on the rear wall with seven two-chamber overfire air (OFA) ports on the front wall. Due to poor mixing between the OFA and the flue gas, deep staging for further NOx reduction has been limited by poor post-combustion, leading to high upper furnace temperatures.

Nalco Mobotec engineers began their analysis with a simulation of the existing boiler operation to develop a better understanding of its operation. Initially, the original boiler was simulated for a better understanding of its operation—the first step in developing an optimal NOx reduction solution. The engineers selected FLUENT software, a CFD package from ANSYS Inc., because it is capable of accurately modeling thermal NOx, prompt-NOx, fuel-NOx formation, as well as SNCR NOx reduction.

In the computer model, the furnace geometry was represented with an unstructured grid consisting of approximately 780,000 computational cells. This mesh used a mix of tetrahedral and hexahedral elements (Figure 3). The CFD model included the entire radiant furnace, beginning at the burner throat or OFA face (where inlet boundary conditions were imposed) and ending at the vertical rear wall tubes at the top of the furnace (where outlet boundary conditions were imposed). The CFD model domain extends through the backpass down to the economizer and into the ductwork in order to represent the correct flow field in the upper furnace and to stabilize the numerical solution by preventing any reverse flow or recirculation at the exit boundary. 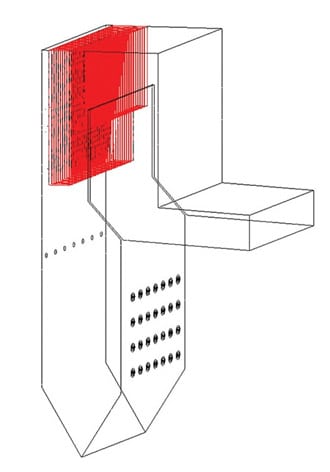 3. Start at the beginning. Nalco Mobotec engineers were charged with reducing emissions on a utility boiler using SNCR. Their first step was to develop a CFD model of the boiler in the “as found” condition. Source: Nalco Mobotec

Engineers properly entered the system information in the model, including firing rate and system load, and coal properties, such as composition and fineness. Burner swirling patterns and the firing configuration were implemented in the model through inlet boundary conditions.

Nalco Mobotec engineers then simulated the furnace with the SNCR system added. This system uses lance-by-lance flow control and is continuously biased by a feedback-control algorithm to react quickly to coal changes, sootblowing, and load in order to tune the system to reduce NOx and slip simultaneously.

The SNCR system includes duct humidification of the boost air, which provides an additional control parameter for timing the chemical availability of the urea to the appropriate NOx reduction chemistry temperature window. In SNCR design, the goal is to expose all of the urea to as much of the flue gas as possible at temperatures between 1,700F and 2,000F. Above this temperature range, urea will actually react to form NOx. Below this temperature range, isocyanic acid (HNCO) and ammonia (NH3) will slip or escape from the hot furnace. Excessive slip can cause binding with sulfur dioxide to form ammonium bisulphate, which agglomerates in the ducting as pluggage or condenses into ash.

The key challenge for Nalco Mobotec engineers was designing the system to deliver the required reduction in NOx while minimizing the installation cost. The primary design parameter is the number and location of the injection ports that are used to inject urea. Injection ports add cost not only because of the labor and material they require but also because of the parasitic power loss required to inject urea into the furnace. Having more ports also means more power is needed to inject urea into the furnace.

Along the cross section of each burner, ignition first occurs on the boundary between the primary flow and the surrounding flow. The flame then propagates and expands into the center of the furnace. The biasing of the combustion to the front wall can be seen from the oxygen distribution in Figure 4b. In the region between the burner zone and the nose, the oxygen concentration is virtually zero along the front wall opposite the burners and below the OFA.

4. The simulation speaks. Sample results from the CFD simulation for (a) gas temperature, (b) oxygen, and (c) carbon monoxide distribution. Source: Nalco Mobotec 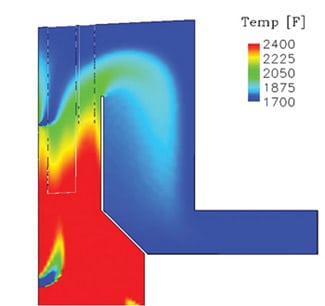 5. Waiting for burnout. A fuel switch from oil to eastern bituminous coal means there is little residence time in the furnace for carbon burnout before combustion gases enter the backpass. This figure shows predicted temperature distribution in the upper furnace. Source: Nalco Mobotec

The next step was adding the SNCR injectors to the model and viewing the results. The CFD NOx calculation with chemical kinetics was performed, and the results are presented in Figure 6. Here, the NO concentration at the exit of the radiant furnace is compared with and without urea injection. This figure shows that urea injection provides a substantial reduction in NOx. Blue and teal regions and the surrounding green areas indicate where the greatest NOx reduction occurs. The total predicted NOx reduction is 32% for this case. This reduction is concentrated in a localized area, representing less than 50% of the cross section of the boiler. On a practical level, there is no injection system that can cover the rest of the area for this large unit. 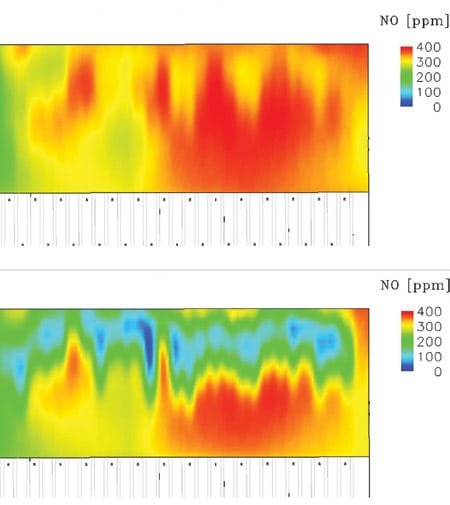 Based on the CFD simulations, Nalco Mobotec engineers decided to inject urea at 50 injectors. Urea flow to each injection port was controlled as a function of boiler load. After the SNCR was installed, the CFD predictions for SNCR NOx reduction were compared with the full load field data, as shown in Table 2.

The recurring costs of operating the SNCR, primarily urea, are approximately $1.5 million per year. The capital cost associated with installing the SNCR was approximately $2.5 million. Both operating costs and capital costs were kept low on the project by utilizing CFD to optimize placement of the injection ports. As a result, the SNCR paid back its cost in less than six months, generating an additional $5.7 million in net revenue per year for the utility owner since that time.