In many countries, plants have to fulfill specific requirements of the electrical grid (such as frequency control, dispatch control, automatic generation control (AGC), and so on) and are paid accordingly, based on their performance. Under these circumstances, it is extremely important for the plant to have the capability to precisely follow the provided load setpoint. Within the plant, proper coordination of the turbine and boiler operation is of extraordinary importance. This coordination is realized by the unit control, which generates setpoints for the boiler and turbine to keep the desired load setpoint while maintaining the desired operating pressures and temperatures. 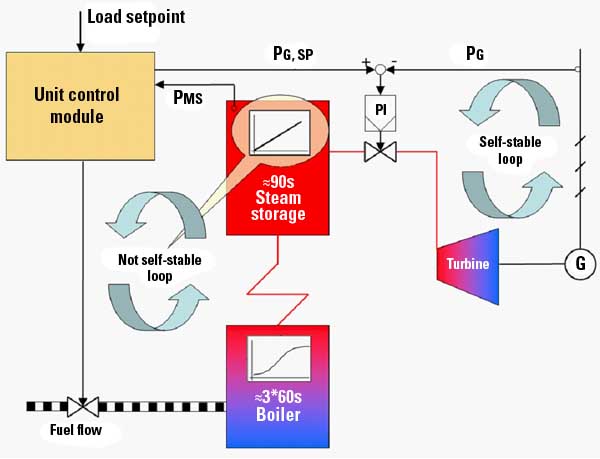 Let’s assume that the load setpoint of the turbine PG,SP shown in Figure 1, as well as the fuel flow to the boiler, is constant and the boiler load is somewhat higher than the setpoint of the electrical load. In this case, the boiler will produce more steam than the turbine consumes. Therefore, the main steam pressure PMS will increase until the high-pressure (HP) bypass or the safety valves open.

Under this operating scenario, this control circuit is not self-stable. The pressure will only be stable at one single point, namely, where the boiler load exactly matches the turbine load. But pressure starts to drift away from its setpoint with every minor system disturbance. Furthermore, there is a time delay of several minutes between the operation of the actuator (fuel flow) and the controlled variable (main steam pressure) response. A very responsive control system design is required to quickly sense and respond to accurately control steam pressure.

Highly sophisticated control concepts are needed to achieve very good control performance in any steam plant. However, translating these control concepts into a functioning and reliable system usually requires very sophisticated and complex control loops that are extremely labor-intensive to commission and maintain. In many cases, model-based control logic is used in the plant controls, and during commissioning, actual unit performance tests are required in order to measure the static and dynamic response of the unit and determine the corresponding model parameters. These tests can be time-consuming and very expensive.

Also, the more accurate the control performance targets, the more detailed the models used in the control structure must be. But as more detailed and accurate parameters are required, even more tests become necessary, and the overall commissioning process thus becomes more and more expensive. Compounding the testing dilemma, when coordinating tests with the load dispatcher, the unit must be operated at a specific load and might not be operated at the most beneficial load point required to tune the controls.

There are situations under which a conventional control system design cannot respond to system changes. For example, if the dynamic response of the boiler changes over time, control performance will degrade. The simple proportional, integral, derivative (PID)-correction controller has to take corrective actions more and more frequently due to the model inaccuracies. These inaccuracies compound and will eventually produce a negative effect on the unit’s stability and flexibility.

As a solution to these shortcomings, Siemens Energy has developed an advanced process controller (APC) for controlling the main steam pressure of a steam power plant by adjusting the fuel flow as an actuator. One major advantage of this controller is that it requires much less controls tuning and lower operating during commissioning. In fact, there are only two major parameters that need to be adjusted. When compared to a conventional controller, the commissioning time can be reduced by more than half. The remainder of this article describes actual test results taken from a steam plant start-up that validates our claims.

Improving the Performance of an Already-Flexible Power Plant

The 200-MW unit in which a unit controller based on the APC concept was tested remains anonymous at the owner’s request. Hard coal was used as the primary fuel; mine gas of variable quality can also be fired as a secondary fuel. The maximum heating power output is 200 MJ/s (683 million Btu/hr).

Several years ago, the plant’s level of automation was increased in the course of upgrading its control system to a SPPA-P3000 digital control system. Subsequent operation of the plant was smooth, with high stability under the complex operating conditions the plant experiences.  After the upgrade, additional measures were implemented to increase the unit’s flexibility and enable it to reliably provide primary and secondary frequency control.

Figure 2 illustrates the typical way of controlling main steam pressure with a model-based feed-forward approach by adjusting the fuel mass flow. During load changes—load ramps as well as frequency disturbances—the required dynamic change in fuel flow, including necessary overfiring, is calculated by the incorporated models to achieve the desired dynamic unit response. The setpoint for pressure is dynamically adjusted in accordance with the calculated fuel demand so that the PID pressure controller will have no control deviation in the event of undisturbed unit operation. The pressure controller only intervenes in the event of disturbances. 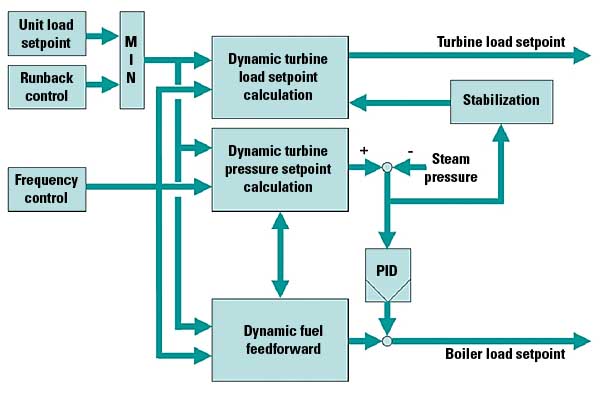 Using a stabilization structure, the load setpoint of the turbine controller is adjusted as a function of the control pressure deviation from setpoint. For example, in the event of a main steam pressure that is too low, the turbine supports the pressure by throttling the HP valves. In this way, the boiler becomes an actuator for a self-stable control plant. However, every pressure control deviation that occurs will also result in a deviation of the electrical power from its setpoint.

The dynamic response of the power plant that was achieved with the model-based feed-forward structure is illustrated in Figures 3 and 4. The rate of change for the load ramp illustrated in Figure 4 was approximately 4.5% per minute. Observe in these figures that the unit is stable and accurately follows its load setpoint with no major over- or undershoot. This demonstrates that very good control performance can be achieved with the model-based feed-forward structure. The power plant with the SPPA-P3000 control structure was truly a demanding benchmark for testing the APC-based unit control structure. 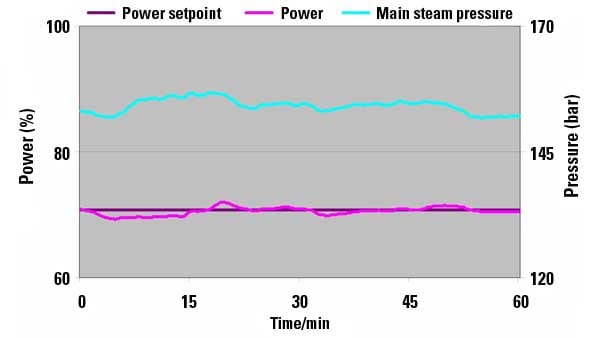 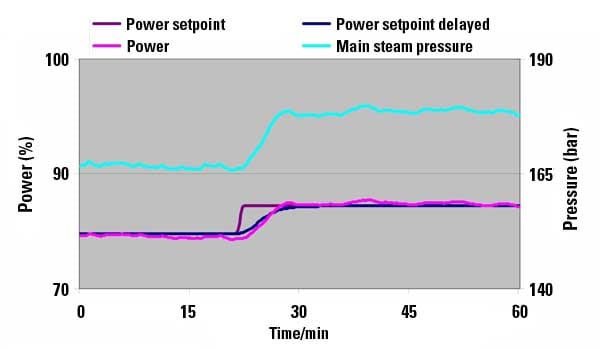 The performance that can be achieved with a conventional unit control can be accurate, stable, and reproducible as long as the calculated trends for the fuel mass flow and main steam pressure are close to the real dynamic response of the boiler. Therefore, it is important that this data is incorporated into the controls system during commissioning to ensure that the dynamic model parameters are accurately determined. Determination of the model parameters must be carried out separately for load ramps, frequency disturbances, pressure setpoint changes, and so on. A great deal of testing may be required during commissioning to determine these model parameters.

With respect to the trends shown in Figure 4, we should note that German power plant units are typically operated with a natural S-curve for normal load ramps. This means that with an increasing load setpoint, the fuel flow is increased. The load setpoint of the turbine is increased once the additional fuel flow results in increased steam production. Therefore, there is no initial pressure drop, and the boiler can be operated smoothly. The APC-based unit control concept is applicable in the same way for unit operation with undelayed load ramps.

Advantages of an Advanced Process Controller 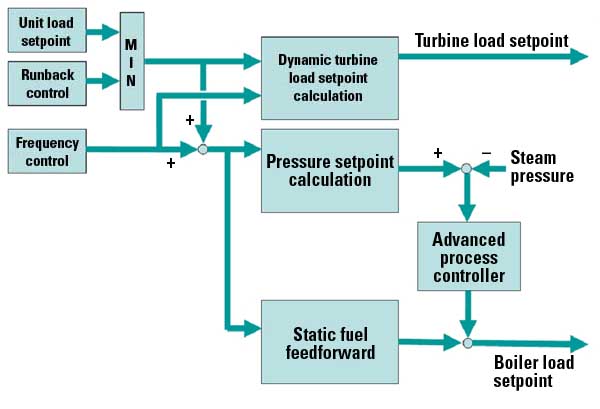 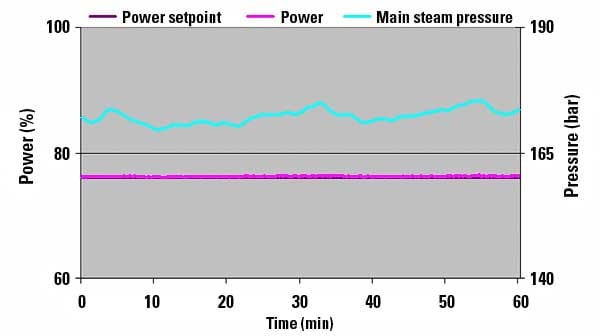 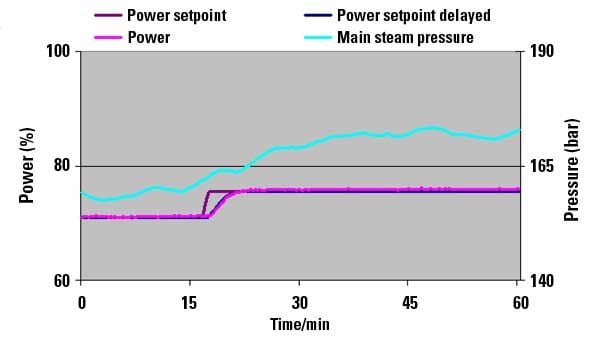 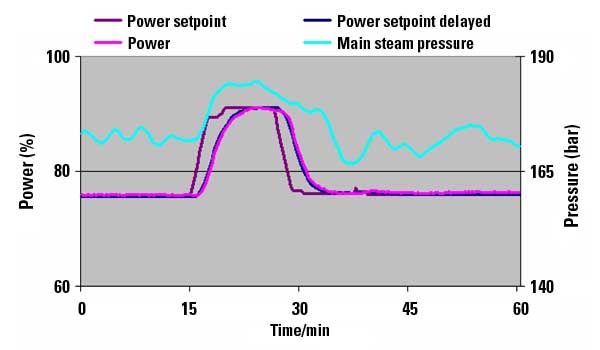 In Figure 6, the control performance during steady state operation can be seen. Compare this level of performance with that shown in Figure 3 and it’s obvious that the main steam pressure is as stable as it was before, and the pressure control deviations are quite similar. However, with the APC there was no modification of the turbine setpoint as a function of the pressure control deviation, the electrical load followed its setpoint with a very high accuracy, and the corresponding control deviation was practically zero. From a load control standpoint, control performance was enhanced compared to the former control structure.

The APC not only stabilized the main steam pressure but also handled the pressure increase experienced because the unit was operated in sliding pressure mode, as the higher load setpoint requires a higher main steam pressure. Comparing the test data with that in Figure 4 shows that the pressure increase was performed slower than before. However, this was not a question of the different control concepts used but a question of how quickly the commissioning engineer wanted the pressure setpoint to increase. When the APC structure was commissioned, it was decided to perform pressure changes slowly to allow smooth boiler operation.

Figure 8 illustrates how the unit responded when the load setpoint was increased and then reduced. The load change rate was approximately 5% per minute. The APC was able to quickly stabilize pressure, and the load followed its setpoint with a very high accuracy.

Using the APC as a module in the SPPA-P3000 unit control opens up a new era for the control of conventional steam power plants. With the new control structure, control performance levels can be attained that were previously considered to be impossible.