The UK government also proposed tough new restrictions on coal-fired power plants, saying no new plant will be approved unless the developer demonstrates carbon capture and storage (CCS) technology on “a substantial portion” of its proposed facility.

“We will propose . . . a requirement to demonstrate [CCS on] at least 300 megawatts of net capacity, or around 400 MW of gross output, as a condition of any consent” for a new coal-fired plant, Ed Miliband, head of the UK Department of Energy and Climate Change, told Parliament.

“The demonstration condition would mean that henceforth, unabated coal-fired power stations will not get government consent.”

Further, Miliband said existing coal-fired power plants would have to be retrofitted with CCS technology within five years of a formal finding by the UK’s environment agency that CCS was technically and commercially proven. The government currently projects that such a finding will be made by 2020.

He said the anticipated 2020 date was based on CCS demonstration projects planned in Great Britain and elsewhere, and that the UK government was expanding its support for large-scale demonstrations of the new technology in England to speed its development. The government will now back up to four major CCS demonstration projects—including one that is already under way—through a special levy on ratepayers; it also will consider a feed-in tariff for plants with CCS. 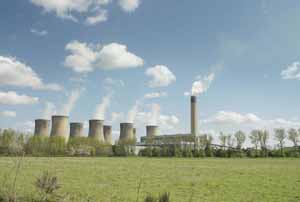 British Energy’s Eggborough power plant, located in Lincolnshire, has four 500-MW coal-fired units that burn bituminous coal.  Units 3 and 4 were retrofitted with flue gas desulfurization systems in 2005. Under new UK carbon rules, Eggborough must retrofit carbon capture and sequestration systems to the plant within five years of a formal ruling that CCS technology is commercial. That finding is expected by 2020.  Courtesy: British Energy

CCS Expected to Be Commercial in 2020

While setting the tough CCS requirements, Miliband noted that coal-fired power plants currently represent 37% of the nation’s generating capacity and provided 31% of its power in 2008. And although many UK coal plants are expected to close due to tighter pollution rules, Miliband said the government would seek public comment on whether a “safety net” was needed in case CCS is not proven by 2020.

However, he made it clear that new coal-fired plants would only be built with CCS.

“In order to ensure that we maintain a diverse energy mix, we need new coal-fired power stations but only if they can be part of a low carbon future,” he said. “With a solution to the problem of coal, we greatly increase our chances of stopping dangerous climate change. Without it we will not succeed.

“This signals the era of unabated coal is coming to an end, and a new low carbon future for coal with CCS can begin.”

Where to Hide the Carbon?

As for where carbon would be sequestered, the government suggested it could be piped to geological formations in its offshore areas. In particular, it said CCS could provide a new future for the declining North Sea oil and natural gas fields, which could use carbon injection to squeeze more hydrocarbons out of depleted hydrocarbon reservoirs under the sea bed.

The government also outlined a raft of requirements under which other kinds of carbon-emitting power plants will have to show they are carbon-capture-ready before the government will approve new facilities. All new gas, oil, biomass, and waste-to-energy plants of 300 MW or above will have to confirm that they have sufficient space available to retrofit CCS; identify a suitable potential offshore area to store carbon dioxide; map a feasible potential transport route from the power station to the storage area; and show they have no “foreseeable barriers” to retrofitting CCS, which may include getting hazardous waste permits to cover environmental risks from carbon stored underground.