China has experienced tremendous growth in electricity demand over the past two decades. Coal-fired plant construction has exploded in the country to meet its seemingly insatiable appetite for electricity. Because most power plants in China use coal as fuel, it is imperative that new coal-fired plants be as clean and efficient as possible. This demand for cleaner plants has led to new and improved instrumentation now being used in new construction projects. 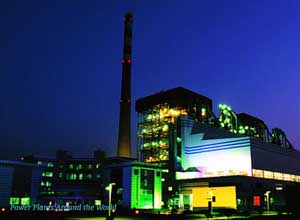 One notable advancement over the Yiyang I design came in the design of the combustion airflow path and the airflow measurement instrumentation. At Yiyang II, combustion air is routed through a series of preheaters. By using otherwise wasted heat to preheat the air used in the boiler, greater efficiencies were obtained. Additionally, all airflows are measured and balanced using advanced high-temperature immersible thermal mass flow technology, resulting in more precise combustion control and thus far lower emissions from the cleaner-burning coal.

In Yiyang II, combustion air to the boiler is supplied from one primary air fan, preheated, and then split into primary, secondary, and tertiary airflows. This design is illustrated in Figure 2. 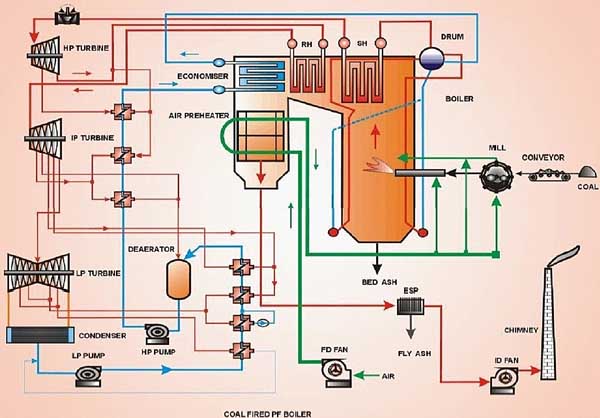 The original plan for Yiyang II was to again use annubar-type flow meters to measure airflows, because this airflow measurement is common in other plants and was also used on Yiyang I. However, annubar flow meters had proven problematic. As you might imagine, the combustion air can be heavily laden with coal dust. The small holes in the annubar flow meters were prone to plugging and, once the holes were plugged, meter performance and accuracy began to degrade. These blockages led to increasing imbalances in the fuel-to-combustion air ratio, which in turn led to incomplete combustion, decreased efficiency, and increased emissions.

An annubar (also called an averaging pitot tube) is a type of differential pressure flow meter that has a series of holes in the flow stream across which a pressure drop is created.

By measuring the static pressure in the tube and the dynamic pressure drop caused by the flow through the holes, the flow velocity can be determined. Unfortunately, as found at Yiyang I, these holes are prone to plugging due to coal dust in the combustion air. This led to repeated line shutdowns for maintenance and cleaning. Annubars are also mid-accuracy (1.5% of full scale) and low-turndown devices (less than 4:1). They are also volumetric devices, which means that they do not directly measure mass flow. Taken together, all of these limitations led the plant engineers to recommend a change in flow measurement equipment for Yiyang II. 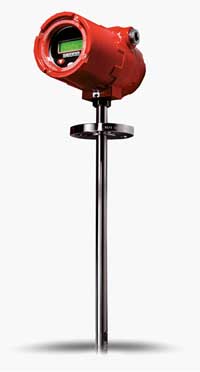 Figure 4 represents a typical Model 640S-HT installation on one of the primary airflow ducts. Primary air is pulled in from the atmosphere by the fan and passed through a steam coil heater to heat the gas to the operating temperature of approximately 400F. There are two boilers per plant and four burners per boiler, with each burner having a flow meter in the primary and secondary air duct. Thus, Yiyang II required a total of 16 flow meters. 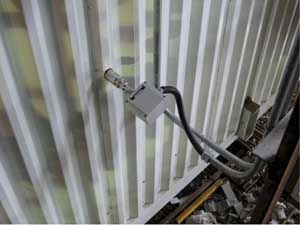 4. A typical installation of the Sierra Model 640S-HT air mass flow meter. A total of 16 of these instruments were installed at Yiyang II. Courtesy: Sierra Instruments

After the system was brought online and boiler operation was stabilized, the plant engineers compared the flow rates to the previous readings obtained from Yiyang I at equivalent loads. The data indicated that the mass flow rates measured by the Sierra Model 640S-HT appeared to read high compared to expectations. In fact, this validated the known fact that many of the holes in the annubars were plugged by coal duct and thus were reading lower than actual flow.

The 16 Sierra Model 640S-HT meters have now been operating at Hunan Yiyang Power Plant Project Two since July 2008, providing both accurate and repeatable flow measurements for control of airflow to the boiler.

As a result of the new combustion air duct work and more sophisticated airflow measurement using insertion Sierra thermal mass flow instrumentation, Yiyang II has shown reduced emissions, greater efficiency, and reduced maintenance costs over Yiyang I. In fact, the improvements in these areas have been so dramatic that Yiyang I is scheduled to be retrofitted with new duct work and Sierra instrumentation during its next extended shutdown.

Sierra’s proprietary electronics heat the velocity sensor at a constant temperature differential above ambient temperature and measures the cooling effect of the gas flow. The amount of energy required to maintain a constant temperature difference can be related to the mass velocity of the gas flowing past the sensor. The resulting high-level voltage output provides excellent low-speed sensitivity and repeatability. Because the heat is carried away by the gas molecules, the heated sensor directly measures gas mass velocity.

The platinum RTD wire is wound on a rugged ceramic mandrel for strength and stability. The sensors are clad in a virtually indestructible sealed platinum/iridium thermo well that uses Sierra’s Dry-Sense Technology to eliminate drift and calibration issues.

Most manufactures of thermal flow sensors use an epoxy or glue to hold the sensing element in place in a thermal flow sensor’s thermo well. The unfortunate result of velocity sensors designed with epoxies or glues is that they can expand or shrink over time, leading to the formation of air pockets or cracks. These cracks change the flow calibration, resulting in what is commonly called “flow drift,” which requires recalibration. Immersible thermal mass flow meters using glues in the velocity sensor typically require an annual factory recalibration, as drift is on the order of 1% of reading per year at a minimum. Calibration in the factory is required because the meter needs a sophisticated flow loop to insure accurate calibration. 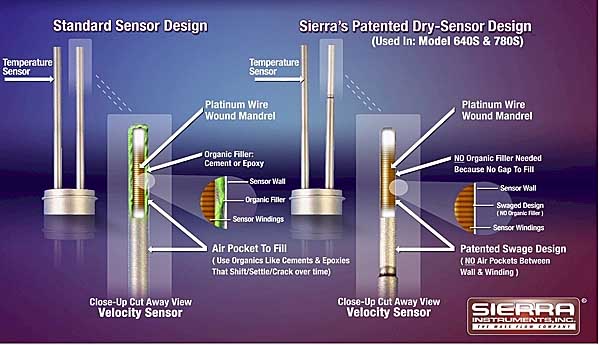 Sierra’s Dry-Sense design uses no epoxies or glues, instead using a proprietary swaging process to press the velocity sensor into the thermowell (Figure 5). This creates a very stable sensor that does not require frequent recalibration.