An important use of fly ash from coal-fired power plants is as a replacement for cement in concrete. Substituting 1 ton of fly ash for 1 ton of Portland cement eliminates about 1 ton of CO2 emissions. In 2006, more than 12 million tons of fly ash were sold in the U.S. for use in concrete, and efforts are under way to increase this amount.

As mercury emission reductions become required, however, the ability to substitute fly ash for cement may be threatened as many coal-fired utilities adopt powdered activated carbon (PAC)–based sorbents. Duct injection of PAC sorbents is a leading technology for power plant mercury mitigation. In this process, the PAC is mixed with the plant’s fly ash. This makes the fly ash unusable in concrete products because standard PACs strongly adsorb the air-entraining admixtures (AEAs) that are added to concrete slurry to create the air bubbles required for the concrete’s workability and freeze-thaw capabilities. 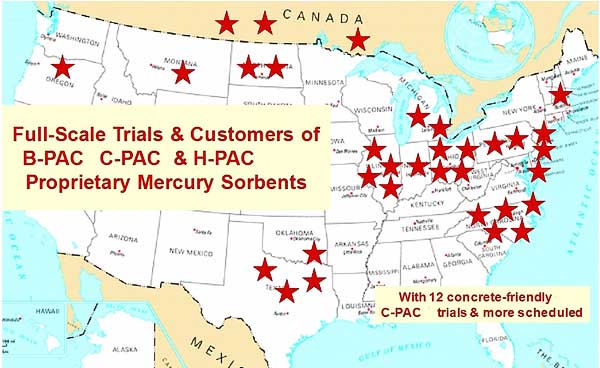 This articles presents full-scale test results performed with C-PAC at Midwest Generation’s Crawford Station, a U.S. Department of Energy (DOE)–supported trial, and at PPL’s Montana’s Corette Station. These tests focused on the effectiveness of mercury removal using C-PAC and the effect of the sorbent on the resulting fly ash.

Results of a utility trial conduct by a company other than Albemarle Sorbent Technologies are also presented. That trial focused on the effectiveness of mercury removal by injecting C-PAC before the air preheater. Data from a fourth, confidential site are presented. That test focused on relative electrostatic precipitator (ESP) performance with C-PAC.

The goal of the full-scale C-PAC injection for mercury control at the Crawford plant was to determine if greater than 70% mercury reduction could be achieved while maintaining the quality of the fly ash for concrete sales.

AST developed the concept of C-PAC concrete-friendly brominated carbonaceous mercury sorbents with funding from the National Science Foundation. The first long-term, full-scale, demonstration trial of C PAC was conducted at Midwest Generation’s Crawford Station Unit 7 in Chicago in the summer of 2006 with financial support from the DOE’s National Energy Technology Laboratory (Project DE-FC26-05NT42308).

The Crawford Station Unit 7 fires Powder River Basin (PRB) coal and has an ESP with a specific collection area of only 120 ft2/1,000 acfm (actual cubic feet per minute). Much of this plant’s fly ash has historically been sold for concrete use. During the month-long continuous test, C-PAC was injected at an average rate of 4.6 pounds of sorbent per million actual cubic feet of flue gas (lb/MMacf). An average total mercury removal rate of over 80% was achieved (Figure 2). 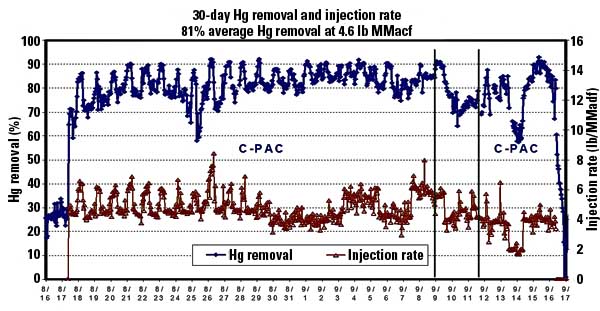 The sorbent injection rate varied over the course of the trial, as it might in commercial practice. Varying amounts of the sorbent were put into the fly ash to challenge its consistency for concrete use. Despite this variability, the resulting AEA adsorption of the ash held to a tight operating band.

During the trial, stack opacity improved, rather than degraded. We also observed that C-PAC injection had the co-benefit of improving the ESP’s particulate collection performance. 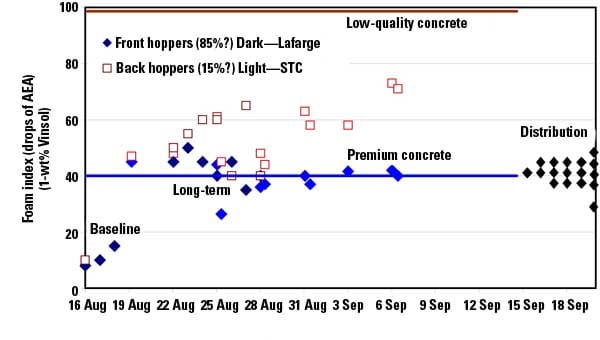 The 40-drop cutoff for premium concrete is somewhat arbitrary, based on the foam index of the unburned carbon and, particularly, on the variation observed in this value. The standard deviation of the C-PAC-containing ash was only four drops, while that of the baseline control ash was even higher, at five drops.

The purpose of the trial conducted at the 154-MW Corette Plant of PPL Montana was also to determine whether the injection of C-PAC could reduce mercury emissions by 80% while maintaining the fly ash’s suitability for use in concrete.

Two different mercury monitors and an Appendix K sorbent trap sampler were all used to make the mercury measurements at this site. There was a baseline period before the parametric testing with C-PAC began. The injection trial was 24/7 beginning at an injection rate of 3 lb/MMacf, based on an ESP inlet (cold-side) flow basis. The objective was to identify the injection rate that would maintain a mercury removal rate at a minimum of 80%, the pending mercury standard, and then stay at this injection rate to ensure that the representative fly ash samples could be obtained.

The test period consisted of two 18-hour trials. A C-PAC injection rate of 3 lb/MMacf was used in the first 18 hours and 5 lb/MMacf in the last 18 hours. These tests would ensure that good fly ash would be collected for the concrete testing and would confirm the mercury removal data from the first test period. The mercury monitor data for the second test period are presented in Figure 4. 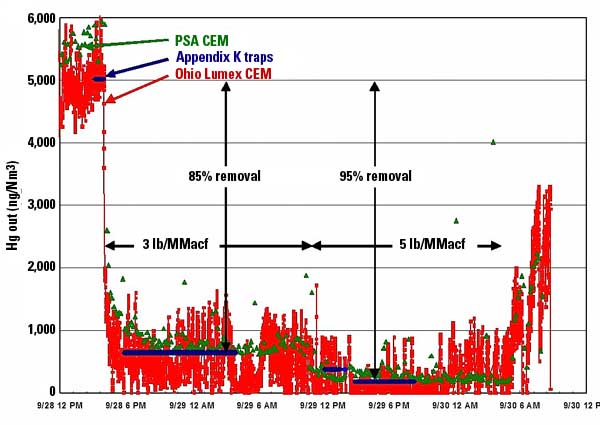 Corette burns PRB subbituminous coal. The coal samples contained about 30% moisture, less than 5% ash, and 0.3% sulfur. The coal’s heat content was slightly below 8,500 Btu/lb. The average mercury content of the coal was approximately 0.080 ppm on a dry basis.

Analysis of the fly ash samples collected during the test confirmed that the proper amount of mercury was being removed from the flue gas and collected in the fly ash.

C-PAC Injection Before the Air Preheater

In another trial in Illinois, AST’s C-PAC sorbent was injected before the air preheater at Midwest Generation’s Waukegan Station. This plant burns PRB coal and has a cold-side ESP for particulate control. The testing was performed by URS Corp.

The test results are summarized in Figure 5. At an injection rate of 3 lb/MMacf, the sorbent removed over 85% of the mercury. At 4 lb/MMacf it removed over 90%. Injecting on the hot side of the ESP lowered the amount of sorbent required. A significant amount of turbulent mixing occurs through the air preheater, and the sorbents have longer residence time. C-PAC was not negatively affected by the increased temperature ahead of the air preheater. The data presented are averages of measurements from continuous mercury monitors and Appendix K sampling at full load. 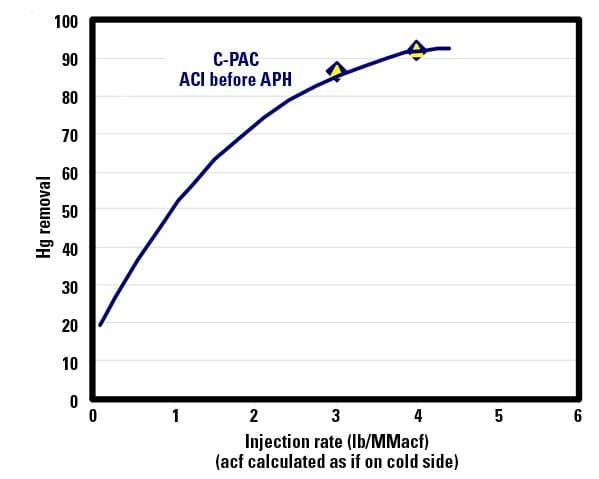 Previously, AST has reported in two DOE trials in which injection of its gas-phase brominated sorbents significantly lowered the ESP opacity as a co-benefit of mercury reductions. This occurred at Progress Energy’s Lee Station with bituminous coal and at Midwest Generation’s Crawford Station Unit 7 with subbituminous coal. This result has not been reported with competitive salt-phase brominated carbons, so it has been an open question whether the two types of brominated sorbents are fundamentally different in this respect.

This year an anonymous utility began permanent operation using a salt-phase brominated carbon for mercury control with subbituminous coal at one of its plants. Immediately, however, the unit began having opacity problems, exceeding its 30% opacity limit. Consequently, it then loaded up its silo with C PAC, to see if a gas-phase brominated sorbent would lead to better opacity results under the same conditions. 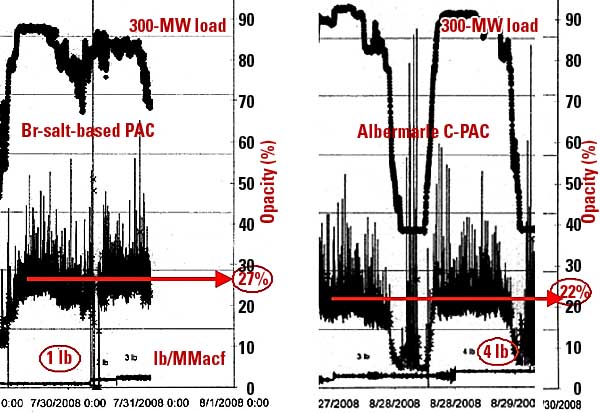 Even injected at 1 lb/MMacf, the salt-phase carbon caused opacity to average about 27% and frequently exceed 30%. With C-PAC however, even at a higher full load and with 3 and 4 lb/MMacf injected, the opacity averaged about 22% (Figure 6).