In 2007, Dominion Resources contracted Alstom to perform steam turbine retrofits on two generating units at its North Anna nuclear power station. The Unit 1 retrofit, with its ongoing instrumentation upgrade, was the second to be completed at the North Anna plant and the fourth overall for Dominion. Completion of this project marked a significant milestone in terms of both technical achievement and investment in providing clean, safe, and reliable baseload electricity for Dominion customers. 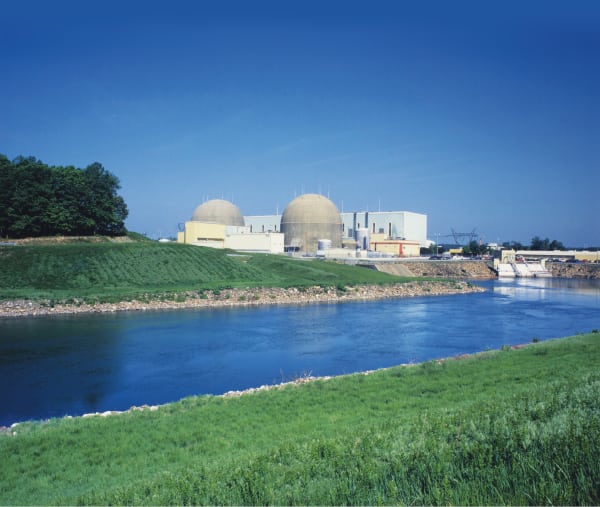 Electricity from a newly constructed nuclear reactor has not entered the U.S. power grid since the Tennessee Valley Authority’s Watts Bar 1 went into service in 1996. However, the electricity produced from reactor upgrades has added the equivalent of perhaps eight to 10 new reactors over the past three decades—without the enormous cost of new construction. That’s been made possible by modern analytic tools that permit today’s engineers to reexamine the safety margins used in the original design of operating reactors to identify potential upgrades.

These upgrades, according to the U.S. Nuclear Regulatory Commission (NRC), fall within three categories:

The nuclear industry has added 6,823 MW across its fleet through 146 approved uprates of all types; 864 MW of uprates are pending NRC approval; another 1,231 MW of uprate applications are expected within the next few years.

Dominion Virginia Power’s (Dominion’s) North Anna Power Station, located 40 miles northwest of Richmond, Va., is one of many plants that have benefited from the NRC-approved uprates. North Anna consists of two pressurized water reactors that entered service in 1978 and 1980. When constructed, each reactor was rated at 850 MW.

Both North Anna units completed a 4.2% stretch uprate in 1986. The NRC approved North Anna’s recent 1.6% MUR uprate in 2009. That added more accurate means of measuring feedwater flow to the reactor and, therefore, a small amount of additional reactor thermal power is possible. The practical effect was that additional steam production was possible while staying within the measurement accuracy of the new instruments. The additional steam produced means that more power could be produced—if there were sufficient excess capacity in the steam turbine, generator, switchgear, other plant equipment, and the grid interconnection.

Unfortunately, North Anna’s generators were the limiting component, so steam turbine upgrades were selected in conjunction with a generator replacement to allow the plant to maximize the efficient use of the additional reactor steam production.

The scope of the steam turbine upgrades for Unit 1 might be described simply as replacing the double-flow, high-pressure (HP) rotor and diaphragms and two low-pressure (LP) double-flow turbines. However, the retrofit was much more complex and challenging than an ordinary like-for-like component replacement.

The LP turbine presented what was perhaps the greater challenge when you consider that the last-stage blade length increased from 48 to 57 inches, an 18-inch diameter increase, while maintaining the same shaft centerline. This much larger LP turbine volume required replacement of the entire LP inner casings. Installation of the two new LP turbines also required structural modification of the unit’s LP condensers, a process achieved with state-of-the-art computer-guided propane torches that removed sections of structural beams to make room for the larger LP unit casings.

Before the North Anna plant could be upgraded with these latest advancements in turbine technology, the project team first had to address several significant engineering challenges.

First, a completely new high-energy piping configuration had to be designed, fabricated, and installed to accommodate the transition from a double-flow HP turbine to a modern single-flow unit. This major adaptation of the plant’s design required the removal and replacement of 2,000 linear feet of piping and the replacement of 350 welds. This effort also included the swap-out of turbine exhaust pipe that is 4 feet in diameter.

Nuclear steam turbine retrofits are, by nature, big projects. The equipment is massive, as is the level of technical expertise and collaboration required of both the plant and supplier teams. The North Anna project benefitted from hundreds of lessons learned during retrofits carried out by Dominion and Alstom on the plant’s Unit 2, and also on Units 1 and 2 of Dominion’s Surry Power Station. North Anna Unit 2’s upgrades were completed during the spring 2010 refueling outage. The Unit 1 upgrades were completed a couple of months prior to the extended forced outage at North Anna caused by the August 23, 2011, earthquake (see “Dominion’s North Anna Station Sets Standard for Earthquake Response,” p. 34).

Planning the choreography of labor and equipment began over two years before the outage began. Engineers used laser-scanning techniques to prepare 3-D models of all of the affected piping with millimeter accuracy. The model was then used to guide the planning of every step of the construction work. The result was a project construction plan that consisted of 1,100-plus work activities (any activities that took more than an hour) that then had to be conformed to the planning schedule of the plant’s refueling outage.

One of the key challenges of coordination with the refueling work was scheduling the use of the overhead crane. The steam turbine tear-out, reconfiguration, and reassembly consisted of three dozen heavy lifts of components such as the 140-ton LP rotors and the 35-ton new inner casings (Figure 1). The confined nature of the work around the steam turbine required close coordination of craft labor. It was also constrained to a particular sequence: Casings must be installed before rewelding the exterior piping, which is followed by the rotor reinstall and then the “centerline” work. 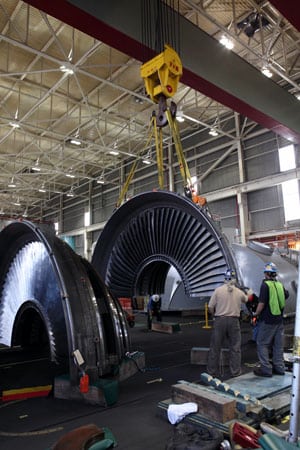 1. Heavy lifting. The steam turbine upgrades on Dominion’s North Anna Unit 1, completed prior to the earthquake that temporarily shut down the plant, replaced the high-pressure and low-pressure sections with more efficient components. Shown in the photo are workers placing a low-pressure turbine shroud segment. Courtesy: Alstom Power

Every one of the 1,100-plus work items was described in detail in an associated work package that described the work to be performed. When completed, a craft and Alstom shift supervisor signed off every work package as a cross-check that the work was properly completed. Planning meetings were conducted at the end/beginning of every shift, with foremen to shift managers present to ensure there was a “hands on” turnover, particularly with any remaining “hot work” under way.

About 140 craft labor were assigned to the project during each 12-hour shift, plus those involved with quality, safety, scheduling, and management. NRC work rules that limit workers to a maximum of 72 hours per week were rigidly followed and exceptions required approval by the site vice president. Therefore, a labor pool of 160 to 170 workers per shift was maintained to ensure day-off rotations.

Before work packages for the refueling outage were completed, the steam turbine upgrades were completed, signed off, and the turbine was sitting on its jacking gear ready for steam. This last of four successful uprate projects is part of the work completed by Dominion to extend the life of North Anna’s Unit 1 for up to another 25 years of operation while providing a significant increase in capacity.

“When the [spring 2012 refueling] outage is finished, the company will have added about 234 megawatts to the Virginia electrical grid” as a result of the upgrades at North Anna and Surry, Dominion said in a message to employees. In fact, the MUR uprate and steam turbine upgrades have increased the gross output of Unit 1 to 980.5 MWe and Unit 2’s generating capacity to 972.9 MWe, according to NRC data. Dominion’s peak summer capacity rating for each North Anna unit after the upgrades is now 943 MWe net.

The project also constituted a significant milestone for Alstom, as the two LP units for the North Anna 1 retrofit were among the first delivered by the company’s new manufacturing facility in Chattanooga, Tenn. Alstom invested $300 million to build the facility to serve the domestic production needs of customers like Dominion.