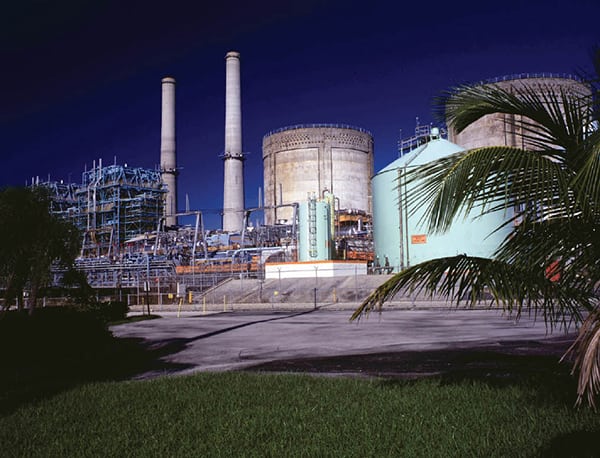 Adding nuclear capacity doesn’t require constructing a new plant. A few aging plants are in the process of retirement, but much of that capacity will be replaced with new plants under construction in the future and by upgrades of existing plants today. Florida Power & Light recently completed a series of four major nuclear plant upgrades that have added 500 MW of capacity to its fleet.

Florida Power & Light (FPL) announced the afternoon of April 17, 2013, that its Turkey Point Unit 4 had completed its planned outage and was resynchronized to the grid earlier in the day. That event signaled the successful completion of a four-unit, five-year, ~$3 billion dollar nuclear plant uprate program that has added 500 MW of nuclear capacity to the FPL grid at modest cost to consumers.

The program, characterized by FPL as “the largest U.S. nuclear project in recent history,” involved equipment modernizations to Units 3 and 4 at the Turkey Point Nuclear Power Plant, located in Miami-Dade County near the southern tip of Florida (Units 1 and 2 are fossil-fueled steam plants), and to the two units at the St. Lucie Nuclear Power Plant, located in St. Lucie County on the eastern shoreline about midway down the coast. The NextEra Energy subsidiary completed the three earlier uprate programs in 2012.

“With consistently low fuel costs, zero emissions and the ability to operate around the clock, nuclear power is a critical component of our state’s energy mix today and tomorrow,” said FPL President Eric Silagy when Turkey Point 4 uprates were completed. “By increasing the amount of power that our nuclear plants can generate, this investment added the equivalent of a new, medium-sized power plant to Florida’s generation fleet, without having to build one.” FPL estimates that 148 MW was added at St. Lucie Unit 1, 132 MW at St. Lucie Unit 2, and between 115 MW and 123 MW at each Turkey Point unit, about 30% more than the expected 399 MW.

Utilities have embraced plant capacity upgrades since the 1970s, when interest in the construction of new plants was dissipating. The Nuclear Regulatory Commission (NRC) approved the first uprate in 1977 as a 5.5% power increase for Calvert Cliffs Units 1 and 2. Since then, the NRC has approved 148 upgrades totaling 20,586 MW thermal or 6,862 MW of new capacity, approximately equal to almost seven new nuclear plants, but at much lower cost.

Not all upgrades are created equal, however. The NRC classifies nuclear plant uprates as falling into one of three categories. First, a “stretch” uprate generally means making more power from the existing equipment, such as with the Calvert Cliffs uprates, and usually does not involve major plant modifications. All 46 uprates approved through 1999 were stretch uprates, and a total of 76 have been approved to date. Second, “measurement uncertainty recapture” (MUR) uprates entail using more accurate means to measure reactor power, usually replacing analog with modern digital sensors and control systems. More accurate instrumentation reduces measurement error so that the actual reactor thermal power can be increased while ensuring the plant stays below its operating license maximum. Comanche Peak Unit 2 in 1999 was the first of 54 MUR uprates approved by the NRC. Finally, the NRC has approved 28 “extended” uprates that usually involve extensive plant upgrades that take years to plan and complete but can provide an increase in rated power output of 20% or more. The first extended uprate was approved for Monticello in March 1998.

FPL’s four-unit uprate program began with seeking the approval of the Florida Public Service Commission and the NRC in 2010. The NRC staff carefully reviewed the utility’s engineering and safety analysis of each unit and determined that the power output of each reactor could be safely increased and the remainder of the plant systems could accommodate the increased power levels. The NRC’s safety evaluation of the plant’s proposed power uprate focused on several areas, including the nuclear steam supply systems, instrumentation and control systems, electrical systems, accident evaluations, radiological consequences, fire protection, operations and training, testing, and technical specification changes.

A key element of the uprate program is Florida’s pay-as-you-go cost recovery framework, also known as “construction work in progress” or CWIP. This approach to funding major capital projects has the advantage of lowering the overall cost to Florida consumers by gradually increasing electric rates to pay for project development and interest costs when the project commences. This approach avoids consumers paying compounded interest that would be due were rates not changed until the project was completed, in this case five years after the start of the program.

An extended uprate is complex because it touches every component, safety system, and operating procedure of the plant. Reactor upgrades may produce additional thermal output, but each downstream item of equipment must also be able to reliably operate within its established design parameters. The FPL uprate program on each of the four units involved pipe replacement, the addition of large motor-operated valves, heat exchangers, and many pumps. In addition, steam turbines and other portions of the steam and condensate system were replaced or upgraded.

The magnitude of the uprate program required an average of about 3,500 workers each throughout 2012, most times working 24/7 to complete each project on time. More than 22 million man-hours were expended, including approximately 4 million engineering mhrs. When completed, the work included installation of 38,000 feet of electrical conduit, 288,500 feet (more than 50 miles) of electrical cable, and 16,000 linear feet of pipe. The equipment upgrades were completed during scheduled refueling outages.

The Turkey Point units are pressurized water reactors of the Westinghouse three-loop design. Commercial operation commenced for Unit 3 in December 1972 and Unit 4 in September 1973. The reactor licenses run through July 2032 and April 2033, respectively. The unit upgrades included a high-pressure turbine replacement with improved turbine technology in order to pass the additional volumetric steam flow produced. In addition, new turbine digital controls and electro-hydraulic control systems were added, as were new moisture separator reheaters and main condenser tube bundles and waterboxes. The condensate pumps and the feedwater pump rotating assemblies were also replaced to accommodate the increased condensate flow requirements and to improve the plant’s operational margin. To handle the additional ~125 MW produced by each unit, the electric generator stators, replacement generator rotors, and the hydrogen cooling systems were upgraded. These upgrades allowed the main generator to be rerated from 894 MVA to 1,032 MVA. Four disconnect switches associated with the main transformer tie lines were also replaced with new switches with higher ratings.

The St. Lucie units are also pressurized water reactors, provided by Combustion Engineering. Commercial operation of Unit 1 began on March 1, 1976, followed by Unit 2 on June 10, 1983. The operating licenses for the reactors expire on March 1, 2036 and April 6, 2043, respectively. The upgrades to the St. Lucie units were similar to those completed at Turkey Point, although the low-pressure steam turbine flow path (two per unit) was replaced and the generator rotors were rewound rather than replaced. Siemens provided the high-pressure and low-pressure turbines, the generator modernization, and field services for all four units.

In many ways, upgrading existing plants is much more complicated than designing and constructing a plant from scratch, particularly the work completed within the plant’s radiation protection boundary. FPL has demonstrated that these massive plant upgrades are not only major feats of engineering and construction but also economically practical. Congratulations to the FPL and Siemens team on the completion of the uprate program that will pay dividends to its customers for many years to come. ■