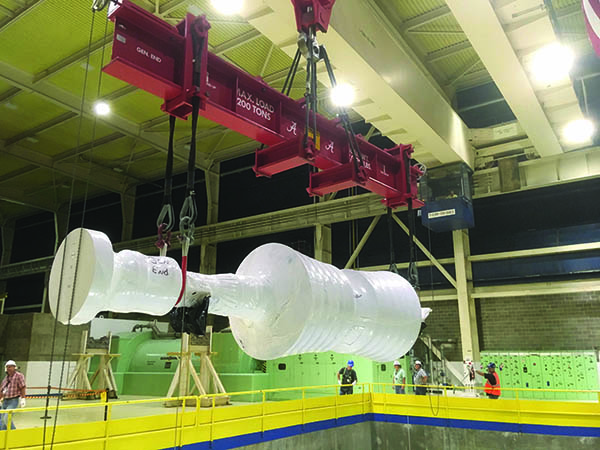 The Browns Ferry Nuclear Plant completed an extended power uprate (EPU) that increased the total capacity of the facility’s three units by about 465 MW. The addition is an important part of the Tennessee Valley Authority’s plan for meeting the region’s power needs for decades to come, and the project is a worthy POWER Top Plant award winner.

Nuclear power has long been an important contributor to the U.S. power mix. However, the industry has struggled to add new units to the fleet since the late 1980s, when many of the last reactors to begin construction prior to the Three Mile Island accident entered service. In fact, only one new nuclear unit—the Tennessee Valley Authority’s (TVA’s) Watts Bar Unit 2—has commenced commercial operation since 1996.

Still, the total capacity of U.S. nuclear power plants has not remained stagnant. From 1996 to today, about 6.7 GW of nuclear generating capacity—the equivalent of roughly six new large modern reactors—has been added to the fleet as a result of power uprates. Getting U.S. Nuclear Regulatory Commission (NRC) approval for a power uprate is a lengthy and involved process, but it can be worthwhile because it allows owners to increase the maximum power level at which an existing nuclear power plant may operate. Over the past 23 years, the NRC has approved 135 uprates (several units have been uprated more than once), with increases ranging from 0.4% to 20% greater than original license limits. 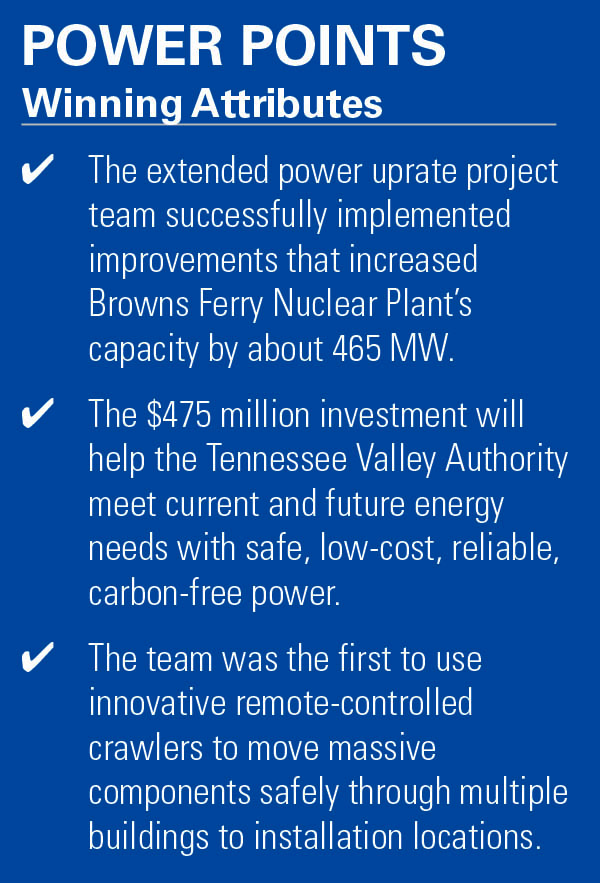 One facility that recently completed an extended power uprate (EPU), adding about 465 MW of total capacity to the station, is TVA’s Browns Ferry Nuclear Plant (BFN) in Lawrence County, Alabama. BFN has a long and storied history. It was TVA’s first nuclear site, with Unit 1 entering commercial operation in 1973, and it remains the utility’s largest, accounting for more than 15% of TVA’s total generation capacity. The station’s three units were the world’s first boiling water reactors capable of producing more than 1 GW of power each.

An EPU is the most extensive of the uprates the NRC considers. In BFN’s case, frequent meetings with the NRC were required. Pete Donahue, EPU project lead for TVA, told POWER that “consistent meetings resulted in improved communications that facilitated timely completion of NRC required reviews throughout the project and during power ascension to EPU conditions.”

Members of the EPU project team worked through a bevy of licensing activities to obtain NRC approval. The dedicated group of on-site, corporate, and vendor partners answered more than 200 requests for additional information during the NRC review. TVA’s EPU request was ultimately approved in August 2017.

TVA said its EPU core team is a diverse group with experience in engineering, operations, licensing, regulatory affairs, training, and project management. Normally, there are about 1,500 TVA and supplemental employees that support BFN’s three units, but during a typical refueling outage, approximately 300 additional personnel are engaged, depending on the scope of work. The EPU outages required more than 150 extra personnel to support the additional scope required for the uprate.

A diverse team of project engineers was also assembled to provide dedicated support to the multitude of engineering activities needed to make the EPU possible. This approach enabled EPU-related engineering work to progress without being impacted by emergent plant support activities, while also preventing the site engineering staff from being overwhelmed by the added burden of supporting the large number of EPU-related design changes.

Bill Baker, senior manager of EPU operations, noted the importance of getting operators involved early on. “We benefited from industry learnings, as many plants have done this before us. We learned to engage operators early and often. We began to introduce changes and simulation tests two years before implementation,” Baker said.

But it wasn’t just operators, everyone at the plant was important to success, including maintenance, radiation protection, chemistry, and other workers. “Engaging everyone early allows for their valuable input so they can be confident about changes,” said Baker.

Throughout the development of the design changes, input was solicited from stakeholders to ensure that the project’s goal of a smooth transition to EPU operating conditions would be achieved. In many cases, stakeholders were concerned about potential reductions in operating margins at the higher limits. To address fears, various design changes were developed to improve margins, often resulting in margins greater than what existed prior to the EPU.

One example is the redesign of the plant’s condenser vacuum monitoring instrumentation. The latest arrangement enables the use of variable alarm and turbine trip setpoints correlated to reactor power. With this new scheme, there is less potential for turbine trips or the need to reduce power due to low condenser vacuum.

Another concern raised was that the resin on the septa in the condensate demineralizer vessels would need to be backwashed more frequently after the EPU project was fully implemented. This led design engineers to change the internals of the condensate demineralizer vessels, which has significantly extended the run-time between backwashes and reduced the frequency of resin replacement.

When significant changes are made to a plant, one of the biggest unknowns is how those changes will affect the people who operate and maintain the units. “We engaged licensed operators and let them operate on a simulator and used their feedback. This helped them identify challenges up front and be confident about the operation of the plant,” said Baker. “This also helped us identify better processes that could be used across the industry.”

EPU engineering staff met with BFN site engineering prior to EPU implementation, and held collaborative training on operational and design margins impacted by the project. Margins affected by EPU were documented in a formally reviewed and approved document, and expected margins were revalidated during EPU power ascension.

“Engineering also provided design changes to address concerns of increased workload for plant personnel due to EPU,” said Eric Frevold, EPU design engineering lead. “For example, since generator hydrogen makeup at Browns Ferry was being performed and tracked manually, and would need to occur more frequently at EPU, a design was developed using Coriolis flow metering technology that completely automates the supply of hydrogen to the generator and the tracking of hydrogen usage. This cut down on the operator workload.”

One issue faced by the industry after power uprates has been damage to steam dryers as a result of higher steam flow. The steam dryers, which are located inside the reactor pressure vessel, are susceptible to acoustic loads emanating from steam flowing over openings in main steam lines. A major technical concern was the amplification of the acoustic wave as it resonated over three serial safety relief valve (SRV) openings.

Browns Ferry replaced the steam dryers with a much more robust design (Figure 1) capable of withstanding the higher acoustic loads. Although the acoustic loads increased as a result of higher steam flows, Browns Ferry did not experience any SRV acoustic resonances.

A number of other changes were made to each unit as part of the EPU project. Among the more significant modifications were:

“These tube bundles are long and heavy,” said Ashley Michael, Browns Ferry EPU implementation lead. “The typical fix for moving these kinds of components includes tracks or rails, but that would have required reinforcing the floor, which would have added extra time, labor, and materials to the outage.

“Instead, we put together two remote-controlled crawlers that could operate independently to navigate through the 90-degree turns from the inside of the turbine building, through the service building, and positioned outside to be lifted by a crane.” This was the first time that a double-skid-steer configuration had ever been used to remove and replace plant components of this magnitude.

“By using this method, we reduced the outage schedule by seven days, and then once implemented, we finished seven days early, which is a significant cost and schedule savings for the plant,” Michael said.

TVA spent about $475 million to implement the EPU project at BFN, but that investment is expected to provide a long-term payback. Unit 1 is licensed until Dec. 20, 2033, with licenses for Units 2 and 3 expiring in 2034 and 2036, respectively. Furthermore, TVA is looking into the process of renewing the licenses for an additional 20 years, which would more than double the initial benefit of the EPU. ■