In the late 19th century, efficient combustion of solid fuels was achieved more by trial and error than by a fundamental understanding of stoichiometry and staged combustion. Boiler manufacturers took many different approaches to the challenge. Some made sense; others didn’t. In which category does the design described below fall?

In 1886 the editors of POWER reviewed the latest offering from Bridgeport Boiler Works, the Lowe boiler furnace (Figure 1), which was said to be “based upon the principle that gases, of whatever nature they may be, must be heated to a certain temperature before they can unite with the oxygen of the air or burn, and that in a general way, it is impossible to get sufficient air to pass up between the grate bars and through the fuel to produce a complete combustion. 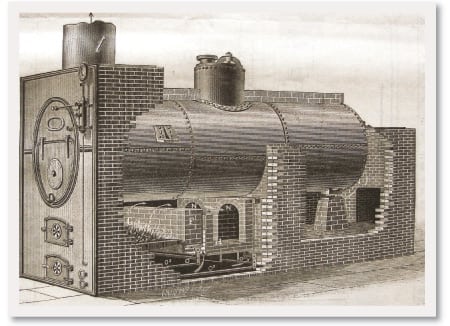 “It will thus be seen that the gases in passing through the combustion chamber on their way to the arches in the back wall are supplemented by two streams of pure hot air entering above and below. This insures a perfect mixing of the oxygen with the combustible gases; and the lining of firebrick, which is at all time very highly heated, insures their certain ignition.”

Allis-Chalmers released a series of new gas engine products this month. Several were destined for “the power house of the Indiana Steel Company’s new work at Gary, Ind., and for other large installations.

“These engines [Figure 2] have the largest cylinder diameter of any gas engine yet built in this country, the sizes being 44 inches in diameter by 54 inches stroke. They have the same volumetric capacity as the engines built for the Pacific Gas and Electric Company, which are 42 inches in diameter by 60 inches stroke. An engine of this size on blast-furnace gas of about 80 to 85 B.t.u. will give a safe maximum horse-power in the neighborhood of 4000, but will work up to approximately 5000 horse-power on the richer gases. The valve-gear is located between the engines, concentrating the gear on a twin tandem in a way that makes it very convenient for the operating engineer.

“The Allis Chalmers Company is building thirty-six engines of the size mentioned. In one power house at Gary there will be seventeen units of that size, fifteen of which will be connected to 25-cycle alternators (rated at 2000 kilowatts, but having, of course, large overload capacity) and two will be direct-connected to direct current generators, also of 2000 kilowatts rated capacity. The power house is approximately 125 feet wide and 1000 feet long. The weight of the engine is, in round number, 1,5000,000 pounds. The speed of the engine is 831/3 revolutions per minute.”

The 1930s witnessed rapid expansion in the size and power output of central-station diesel engines around the world. POWER noted that “only a few years ago, it was assumed that the oil engine would never be able to compete for high power outputs, first because it did not lend itself to manufacture in high outputs, secondly because the cost would be greater than that of a corresponding steam plant. Lately however, some fairly big oil engines, coupled to alternators, have been built for use in European power stations, mainly to take the peak load. By far the biggest installation, however, is that for the Copenhagen Power Station [Figure 3]. Two or three years ago, it was decided that considerable extension would be needed, and because Burmeister & Wain, pioneer diesel engine builders, have the works in Copenhagen, the question of building a new central station wholly with oil-engine drive was considered. An order was placed for an alternator set . . . with a normal output of 21,000 b.hp. but that if necessary it should be able to develop 22,500 b.hp. continuously. 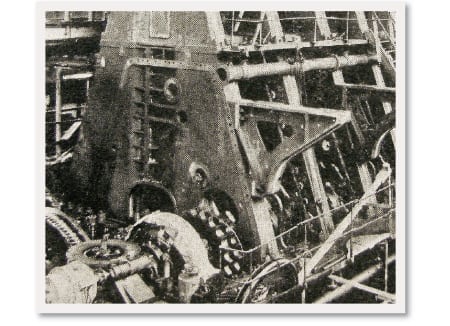 “The [engine], which operates on the double-acting two-stroke-cycle principle . . . has a guaranteed fuel consumption of 0.55 lb. per kw.hr.” [Editor: approximately 33% thermal efficiency.]

POWER also reported that the “first Edison Jumbo dynamo [Figure 4] went into operation in Thomas A. Edison’s first central electric light plant, New York’s historic Pearl Street station [and] the fiftieth anniversary of which was celebrated Sept 4. It is now in Henry Ford’s Museum of American Industries [Editor: now the Henry Ford Museum] at Dearborn, Mich., having been given to Mr. Ford by The New York Edison Company, successor of the Edison Electric Illuminating Company, the pioneer company of the Edison system of incandescent lighting. This is the only one of the six dynamos with which the station was originally equipped that is still in existence.”