Growing hothouse tomatoes might not be the first application that comes to mind for a natural gas–fueled combustion engine, but that’s exactly what an innovative grower in Southern California is doing, with some help from General Electric (GE).

Houweling’s Tomatoes is a North American greenhouse grower with facilities in Camarillo, Calif., and Delta, British Columbia. It produces a broad range of premium hydroponically grown tomatoes and seedless cucumbers on a year-round basis. Houweling’s also operates a plant propagation division for other greenhouse-grown products.

Along with its 33% Renewables Portfolio Standard target, California has also set an ambitious goal of generating 6,500 MW of combined heat and power (CHP) by 2020. While greenhouse CHP systems are common globally—GE has installed more than 800 of them—there were none in the U.S. before Houweling’s approached GE about building one. But although capturing exhaust heat for greenhouse use may be old hat, GE and Houweling’s decided to go one better. In addition to the heat, the system also captures both CO2 emissions to feed the tomatoes and water vapor to water them.

CO2 in the engine exhaust gases will be purified and piped into the greenhouse to fertilize the plants during the daylight photosynthesis process. GE’s Center of Excellence in the Netherlands for greenhouse applications developed technology for the CO2 fertilization system that removes unwanted carbon monoxide and nitrogen oxides with special catalytic reduction equipment and delivers only purified CO2 to the greenhouse. As a result, this high-efficiency, low-emission system will offset the use of natural gas boilers, making it an environmentally sound investment for the grower.

The system developed for Houweling’s 125-acre tomato greenhouse in Camarillo employs two 4.36-MW Jenbacher J624 two-stage turbocharged natural gas engines and the GE CO2 fertilization system (Figure 1). The Houweling’s project also represents the launch of the J624 engines for the 60 Hz segment and the first of these engines sold in the U.S. First introduced in 2007, the J624 is the world’s first 24-cylinder gas engine for commercial power generation. GE distributor Western Energy Systems engineered and installed the plant. 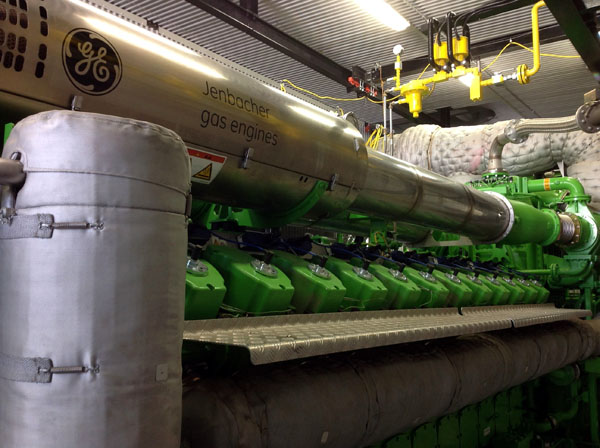 Houweling’s CHP system provides 8.7 MW of electrical power and 10.6 MW of thermal power for heating its greenhouses. The system offers a total thermal efficiency of nearly 90%. When considering the avoided energy purchases that would be required to externally source the CO2, and the recovery of water from the exhaust, overall system efficiency approaches 100%.

While seemingly impossible, the concept of a power plant being able to generate heat and power at nearly 100% overall efficiency is made possible by condensing the water vapor created in the combustion process. Thermal energy is recovered in exhaust gas heat exchangers, which utilize very low water temperatures in the heating system to cool down exhaust temperatures below the dew point (Figure 2). Capturing the water vapor also allows Houweling’s to reduce its water usage by approximately 9,500 gallons per day—always an important issue in western states where agriculture is by far the largest water consumer. 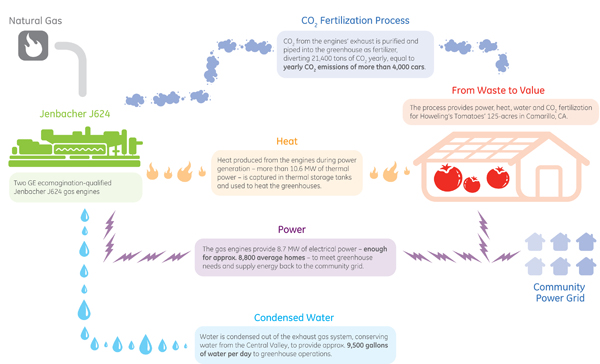 2. The greenhouse system captures four streams of output from the gas engines, leading to an overall efficiency close to 100%. Courtesy: GE.

Houweling’s also invested in a selective catalytic reduction system to minimize carbon monoxide, hydrocarbon, nitrogen oxide (NOx), and other emissions. The total emitted levels of pollutants meet the levels required by the local air pollution control district in Ventura County. NOx emissions are below 5 ppm, which represents a major reduction compared to the previous gas boiler system, which produced up to 40 ppm NOx.

The CHP plant will contribute electric power to the local grid during peak daytime demand periods. Additionally, the thermal energy produced from the engine during power generation can be transferred to the greenhouse immediately during cooler periods or retained in existing thermal storage tanks for use at other times of the day.

“This CHP system will provide the necessary heat, power and CO2 for the growth of our fresh greenhouse tomatoes,” said grower Casey Houweling. “However, the impact of this project on the region goes far beyond the vegetables produced in the greenhouse. This ultra-high-efficiency CHP plant also will provide flexible power to our local utility with a very short response time. GE’s proven technology and industry-leading efficiencies allow us to have one of the lowest CO2 footprints and water usage in the region for a power plant of this size. We felt this project was the right thing to do for both our company and our community.”