One of the big surprises facing plants that switch from a more or less standard bituminous coal to a western coal is the increase in slagging and fouling. Many plants have reported significantly more fouling with Powder River Basin (PRB) coal than with their previous coal. Coping with more fouling usually means modifying either the number, type, or location of sootblowers as well as increasing their operating frequency. A number of automation systems are also available that use thermodynamic models of the steam generator to predict type and frequency of cleaning; others use sensors in the gas path to “report” when tube surfaces need cleaning. The one constant for nearly a decade has been the mechanics of sootblowing.

Failing to get your gas pass surface cleaning regimen house in order is costly. Accumulated ash causes steam generators to operate less efficiently. That means more fuel is burned and the death spiral begins. The challenge is that every boiler, fuel, and operating scenario is unique and typically requires a customized solution to be effective. The right combination can be elusive. Lower efficiency levels are indicated by an increase in overall pressure drop, exit gas temperature, and/or fan power; additional tube erosion and leaks; ongoing high O&M expenses; and more-frequent unplanned outages solely for cleaning. If this sounds like your plant, we just might have the solution you are looking for.

A new technology was introduced to the U.S. power generation industry about five years ago. It uses detonation cleaning, derived from Pratt & Whitney’s Pulse Detonation Engine, which is used to power a supersonic craft (Figure 1). The engineers developing the futuristic pulse detonation engine could not have foreseen that this technology would migrate into the electric power industry as the most novel boiler cleaning technology to come along in many years. The new ShockSystem detonation cleaning combustor (Figure 2) has nothing to do with using dynamite or detonating cord when a unit is off-line—the most invasive cleaning method still in use. Nor does it refer to other on-line cleaning system options such as sonic horns or water canons. 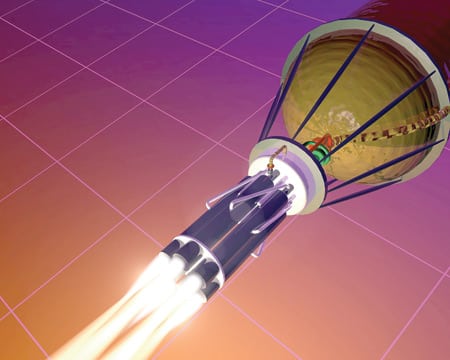 1. Shock wave. This is an artist’s concept of a pulse detonation engine powering a spacecraft. The concept is simple: A fuel/oxidizer mixture fills a tube and is ignited. The rapid burning transitions into a detonation wave that travels though the cylinder at up to eight times the speed of sound. Combustion is completed before the gas has had time to expand. The resulting explosive pressure is then converted into thrust for the vehicle. Courtesy: NASA Marshall Space Flight Center 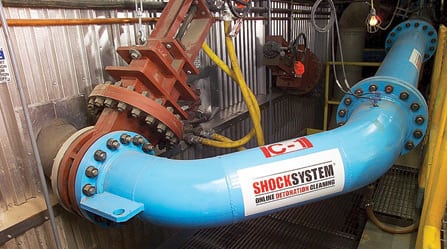 The process of creating a detonation consists of injecting a mixture of fuel and oxidizer into a chamber, igniting this mixture, transitioning the resulting combustion wave to a detonation wave, and then purging with air to prepare for the next cycle (Figure 3). The detonation wave travels at supersonic speeds within the combustion chamber and quickly decays to a blast wave once it leaves the chamber and propagates in open space (or within a large structure, such as a boiler). The blast wave—also known as a pressure wave, a pressure pulse, or simply an impulse—has the energy required to remove sintered and unsintered ash in the backpass of boilers. This pressure wave has little to no negative effects on tube erosion, and the required operational frequency is much less than that of acoustic horns.

Detonation cleaning creates a blast wave that propagates omnidirectionally from the combustor exit. To date, all applications have been mounted outside the boiler wall and direct the blast wave through a penetration. These applications have been installed on both positive and balanced draft boilers. The benefit of this type of installation is that the combustion chamber can be installed along the boiler wall or routed around external structures without risking the loss of a lance tube due to bending, getting stuck, or breaking off during operation. Another major advantage boiler operators see is that the pressure waves are controlled and applied on-line, thus eliminating unnecessary outages. The long-term effects on tube erosion are minimal, plant emissions are lowered, exit gas temperature is decreased, and overall boiler efficiency is increased.

Detonation cleaning’s omnidirectional blast wave propagates through the entire tube assembly, whereas sootblowing technology is restricted to line-of-sight cleaning. Each detonation impulse is equivalent to multiple 6-minute sootblowing cycles, and one combustor can replace up to four sootblowers, depending on the boiler configuration. A standard detonation cleaning schedule calls for 10 pulses (each lasting just a few milliseconds), repeated every 12 hours per combustor. Sootblowers typically require one 6-minute cycle every 4 hours per sootblower. Detonation cleaning is successful in continuous-maintenance mode and remedial cleaning mode, removing established deposits upon initial installation. Sootblowers are used principally in continuous-maintenance mode and are ineffective at removing ash that has been allowed to accumulate and sinter.

Detonation cleaning combustors reside outside of the boiler, whereas sootblowers must traverse inside the boiler. The Pratt & Whitney ShockSystem has only two routine maintenance requirements: replacement of fuel/oxidizer filters and replacement of the combustor spark plug—not unlike routine service for your vehicle. Compare that to the maintenance required for standard retractable-lance sootblowers, where worn or damaged nozzles and gearbox seals; warped, melted, or corroded lance tubes; and damaged feedtubes require constant attention.

Economic alternative. O&M costs with the ShockSystem detonation system may be less than with conventional sootblower systems. Source: Pratt & Whitney

The industry has also used omnidirectional acoustic cleaning without the negative tube erosion effects of traditional air and steam sootblowers. The results from acoustic horns have been moderate at best. Acoustic horns create sound waves, at various frequencies, to dislodge unsintered ash in the lower-temperature regions of the backpass. They have also been installed on environmental components further downstream. Even here, acoustic horns often do not deliver the advertised performance. In certain applications acoustic horns are required to run much more often than originally envisioned in an effort to improve their performance. This has caused a high level of concern for long-term boiler integrity, considering the relatively minimal cleaning achieved.

Detonation sootblowing also offers additional flexibility for equipment placement. Conventional sootblowers require large deck spaces on which to rest the retractable lance tubes when not in operation. Detonation combustors can be installed in many different configurations without losing any cleaning strength.

Detonation cleaning products can be installed along the boiler wall and can be bent to avoid obstacles. In a bent tube configuration the outer edge of a combustor is only about 6 feet from the boiler wall. Nestling multiple tubes optimizes cleaning while minimizing the device’s physical footprint. Because detonation cleaning products replace sootblowers in many applications, they can also be placed in existing sootblower locations by adapting the sootblower penetrations to fit the combustor chamber (Figure 4).

Detonation-based on-line boiler cleaning technology is not a “turbocharged” acoustic horn. The blast wave created by a detonation combustor is a discrete pressure discontinuity, which is fundamentally different from the cyclic waves of acoustic horns. The pressure amplitude is also orders of magnitude higher for a blast wave compared with an acoustic horn sound wave.

Although acoustic technologies are omnidirectional in nature, each blast wave impulse from a detonation combustor delivers far more energy than an acoustic horn, operating in the 25- to 220-Hz range, can deliver in an entire day—even if run continuously. Measured on the decibel scale, the blast wave produced by the ShockSystem inside the boiler is greater than 175 dB, whereas acoustic horns run between 130 and 150 dB. Outside the boiler, noise levels have been measured in the 100 dB range—well below acceptable OSHA limits and requiring no more hearing protection than is typically used at a power plant.

Detonation cleaning is successful in continuous-maintenance mode and remedial cleaning mode where established deposits must be removed. Acoustic cleaning is used primarily in a continuous-maintenance mode and is inadequate for removing ash that’s been allowed to accumulate and sinter. A series of before and after photos posted on the ShockSystem web site (www.shock-system.com) illustrate the cleaning effectiveness of the system.

Results of demonstrations as well as permanent installations of the ShockSystem have shown on-line detonation cleaning in various boiler regions to be as effective as or more effective than conventional methods in controlling ash deposit accumulation, limiting plant outages, and improving heat rate (Figure 5).

5. It’s a blast. The omnidirectional nature of the blast releases energy in three dimensions, thereby giving the heat transfer surface a thorough cleaning. The process has three stages (left to right): First is bridging and platenization—shown in a cross section of a boiler before cleaning, then a shockwave moves through the boiler tube space when the ShockSystem is ignited, and, finally, partial cleaning of the tube surfaces is illustrated after the shockwave dissipates. Cleaning can be repeated as needed. Courtesy: Pratt & Whitney MMI

The non-line-of-sight cleaning ability of the blast wave cannot be achieved by conventional sootblower jets. The detonation cleaning device operates during normal boiler operations, thereby reducing the number and/or duration of plant outages required for cleaning otherwise inaccessible locations. This new technique is expected to result in less tube wear attributable to particle impact erosion, thanks to the lower entrained ash velocity associated with the blast wave. This translates into longer unit life and a reduced number of unplanned outages.

The on-line detonation cleaning combustor does not burden valuable plant resources such as steam or high-pressure air (and the associated compressors). This advantage is expected to result in a significantly lower cost of operation. Another advantage relative to conventional sootblower technology is that the on-line detonation cleaning device has fewer mechanical parts, because it does not need to enter the boiler or be retracted. That means reduced maintenance cost. Moreover, the detonation combustor can be configured in a variety of ways, enabling installations in more confined areas than conventional retractable sootblowers, which commonly require a long, open-space external to boiler for installation.

—Kirk Lupkes (kirk.lupkes@pw.utc.com) is the engineering manager of Pratt & Whitney MMI. A. Tofa McCormick (andrew.mccormick@pw.utc.com) is a senior analyst in the Marketing & Communications group.