While there may have been thick partisan gloss brushed onto the national election scene, shale gas and unconventional oil development have overwhelming bipartisan support at the state level. First, begin with the assumption that the 30 current Republican governors would likely be in favor of expanding the sector. Second, add the Democratic governors who actively support the opportunity.

The Democratic Governors Association (DGA) released a report on September 8 entitled “Opportunities to Increase and Diversify Domestic Energy Resources: A Path Forward for States to Retain and Create Jobs.” While the report covers many domestic energy and policy options, it is explicit on shale gas, urging its members to “avoid implementing policies that undermine the availability of domestic natural gas.” The report also notes that lack of pipeline infrastructure and long-term price signals to developers of gas-fired power plants are the two primary impediments to economic development from domestic natural gas.

The report cites as a successful example of overcoming these impediments the case of Maryland Governor Martin O’Malley’s Public Service Commission running a “competitive and transparent solicitation for new electricity generation with which the state’s utilities were required to contract.” Interestingly, the auction was conducted outside of PJM market structures. What this suggests is that if the existing regional “competitive” structure (PJM) can’t jump-start gas and electric infrastructure investment vital to putting people back to work, states will have to get it done by other means.

The DGA is also encouraging the use of natural gas as a transportation fuel. The report recommends creating vehicle fleet conversion requirements: “Converting fleets to natural gas can result in cost savings and improved local air quality. Many [converted] fleets see a 15-28% fuel savings compared to diesel fleets.”

Expanding the nation’s compressed natural gas (CNG) infrastructure has to precede fleet conversions. If you can’t buy fuel, you can’t haul goods. To that end, another report, “Leveling the Playing Field for Natural Gas in Transportation,” issued in June by The Hamilton Project (the paper is distributed by the Brookings Institution), notes that oil was trading at a 5x premium to natural gas at the end of 2011, although the ratio isn’t much better today (Figure 1). The report recommends policy choices that will create parity between gas and oil with respect to social and environmental costs. In some locations, where coal-fired electricity predominates, CNG-fueled vehicles present emissions benefits comparable to those of electric vehicles. 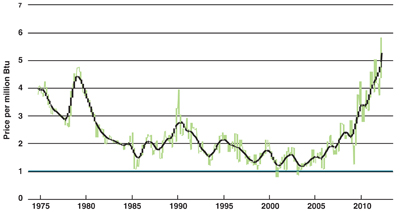 Like the DGA report, The Hamilton Project implicates inefficient pricing structures that maintain the status quo. It recommends subsidies for CNG fuel commensurate with the reduction in social costs associated with their use. For comparison, the author calculates that the total external costs avoided by CNG vehicles (not including any value placed on carbon) are $3,355 for a pick-up truck at 15 mpg, $1,678 for a sedan at 30 mpg, $51,052 for a heavy-duty truck at 5 mpg, and $36,466 for a heavy-duty truck at 7 mpg. The author also claims that the social benefits of an all-electric vehicle are one-third of the subsidy cost.

Government subsidies, of course, distort the market, so again, one must view this in the context of subsidizing domestic energy production and consumption in support of economic development and jobs.

Finally, a new report from IHS Global Insight/CERA, “The Unconventional Oil and Gas Revolution and the US Economy,” released in October, summarizes why policy-makers can’t ignore shale gas and domestic oil production. Domestic oil and gas extraction has been one of the only consistent drivers of U.S. economic growth over the last five years, during the worst recession the country has experienced since the Great Depression. That’s only the beginning, according to this report. Over the next eight years, IHS forecasts that the sector will “stimulate the addition of 1.3 million new jobs,” adding $178 billion in value to the U.S. economy.

Importantly, the IHS report details how this economic value is distributed throughout the country, not just in the states with the resources in the ground. Illinois, for example, is a hub for manufacturing the equipment used at drilling sites. Also, as has been reported elsewhere, huge new manufacturing complexes are being planned to take advantage of these newly available abundant domestic energy resources, in addition to CNG infrastructure and gas-fired power-generating facilities (Figure 2). 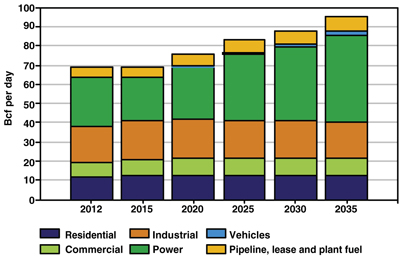 2. Natural gas demand will increase the most in the electricity production sector, according to IHS. Source: IHS/CERA

Government subsidies in the energy sector have always distorted the market; it’s just a matter of the current overriding priorities. When economic times are good, environmental protection and competitive markets are priorities. When times are not so good, policies that support job creation reign. With unemployment at 7.9%, and IHS (and others) predicting that unemployment will not get below 6% until 2020 or later, you can bet that politicians will seek to turbocharge an already proven jobs-creating engine.