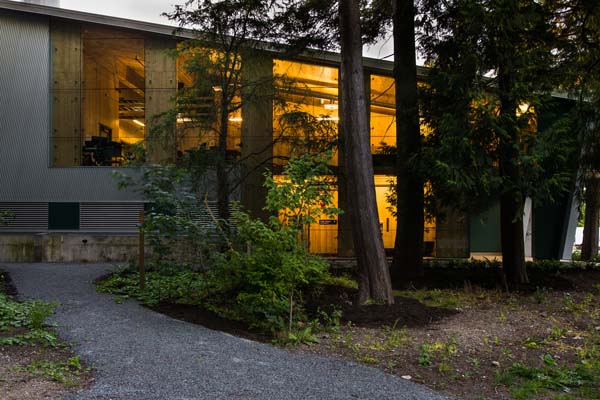 A sleek, modern building on the campus of the University of British Columbia (UBC) in Vancouver, set amongst dense pine forest on neatly landscaped grounds, could easily be mistaken for a library or administration building with its glass–and–laminated wood exterior. But the blue sign out front reading “Bioenergy Research & Demonstration Facility” tells a different story.

What’s inside is a new state-of-the-art combined heat and power (CHP) facility running on syngas derived from local biomass. The CDN$34 million project is a partnership of Vancouver-based Nexterra, General Electric (GE), and UBC. And “research and demonstration” or not, the facility is serious about its output: It generates 2 MW of clean electricity for the campus and supplies up to 9,600 lb/hr of steam in CHP mode. It will also reduce UBC’s natural gas consumption by 12% and campus greenhouse gas (GHG) emissions by 5,000 tons.

The facility also serves an educational function in line with UBC’s status as a major research university. UBC faculty and students will use the facility to research, develop, and evaluate bioenergy and other clean energies, processes, and technologies.

“This exciting facility targets a major challenge facing society—the need for new, clean energy solutions that work at a community scale,” said UBC President Stephen Toope. “This is a flagship example of UBC as a living laboratory, where researchers, staff, students and partners collaborate on innovations targeting the pressing challenges of our day.”

The system came online in September and is the first commercial demonstration of a new application that combines Nexterra’s gasification and syngas-cleaning technologies with GE’s Jenbacher engines. UBC is Canada’s first university—and one of a few institutions worldwide—to produce both clean heat and electricity for its campus from renewable bioenergy (another, at the University of Iowa, was profiled in the September issue of POWER).

Wood to Gas to Power

The process begins with locally sourced tree trimmings and waste wood chips that would have gone into nearby landfills. The material is first passed through a dryer that reduces moisture content to 20%. It is then processed by Nexterra’s proprietary gasification technology to produce syngas (a mixture of CO and H2). The gasifier is a fixed-bed updraft system that heats the wood chips in a carefully controlled environment. Combustion air (20% to 30% of stoichiometric), steam, and/or oxygen are introduced into the base of the fuel pile. Partial oxidation, pyrolysis, and gasification occur at 815C to 980C, and the fuel is converted into syngas and noncombustible ash (Figure 1). 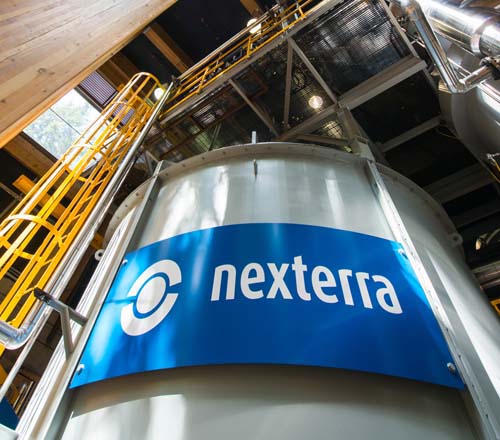 1. Waste wood material is converted to syngas through controlled heating in the gasifier. Courtesy: Nexterra and UBC/Don Erhardt


When the syngas exits the gasifier, it can be used in two different systems. In CHP mode, the syngas is conditioned—in part via an innovative thermal cracking method—and filtered to remove impurities, and is then delivered to a GE Jenbacher gas engine (Figure 2). 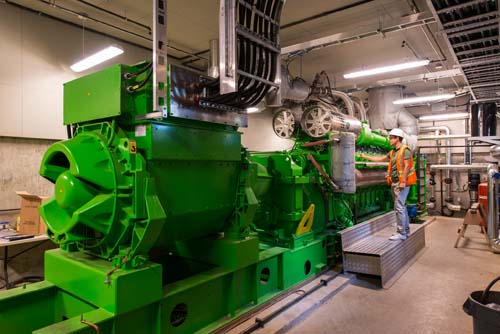 2. The cleaned and conditioned syngas is burned in a GE Jenbacher engine to provide both power and steam for the campus. Courtesy: Nexterra and UBC/Don Erhardt

In thermal mode (intended mainly as backup), steam is produced by passing the syngas through an oxidizer and a conventional boiler. The boiler flue gases are processed in a wet electrostatic precipitator to remove particulate matter. The boiler can run independently of the CHP system, and when operating in this mode can produce up to 20,000 lb/hr of steam.

Startup of this system represents the culmination of more than four years of product development work and collaboration with GE’s gas engines division. Prior to installing the engine at UBC, Nexterra completed more than 5,000 hours of trials at its product development center in Kamloops, B.C.

“This project represents a significant milestone for Nexterra and we are thankful to our partners for helping to make this a tremendous success,” said Mike Scott, president and CEO of Nexterra. “We are seeing significant interest in this next-generation solution from around the globe. We look forward to further proving the system out at UBC and then replicating this system worldwide.”

The facility is just one part of UBC’s commitment to reducing its GHG emissions. The Bioenergy Research & Demonstration Facility is one of four projects that will reduce institutional emissions by 33% by 2015. UBC’s carbon reduction targets, which include a 67% reduction of institutional GHGs by 2020 and zero emissions by 2050, are the most aggressive among major Canadian universities.

Even the building housing the facility is designed to be low-impact. It was constructed using cross-laminate timber (CLT), a new solid wood building material that can be used as a low-carbon, renewable alternative to steel frame construction. This will be one of the first CLT buildings in North America, and hopes are that it will demonstrate CLT’s potential for the forest industry.