Des Moines, Iowa–based MidAmerican Energy Holdings and Calgary-based TransAlta announced in late October that they have formed a partnership to develop, build, and operate new gas-fired power plants in Canada. The two companies will fund the projects on an equal basis, while TransAlta will be responsible for construction, operation, and maintenance.

Development will be focused in Alberta and British Columbia. Both provinces figure to see strong growth in electricity demand, primarily in the industrial sector. In Alberta, tar sands development is booming, and producers are hoping to double production by the end of the decade, while in B.C., at least five liquefied natural gas export facilities are currently being proposed. Both industries are particularly power-hungry.

“The creation of this partnership is a new and exciting development in our growth strategy and better positions the two companies to pursue significant growth opportunities in Canada,” said TransAlta President and CEO Dawn Farrell.

Though this is MidAmerican’s first move into Canada, the two companies have ties going back over a decade through co-ownership in CE Generation LLC. They first partnered up in 2001, and CE Generation now owns and operates 10 geothermal projects in California and three gas-fired cogeneration facilities in New York, Texas, and Arizona.

For TransAlta, the deal means ramping up its development ambitions in a region that appears destined to need it.

Said Farrell, “Studies are showing that more than $200 billion worth of new investment in power generation is needed in Canada over the next 20 years.”

For MidAmerican, part of Warren Buffett’s Berkshire Hathaway empire, it’s an opportunity to add to its array of energy-related holdings.

“We have been seeking an entry point to the Canadian electricity generation market, where we see strong potential for growth,” said MidAmerican chief Greg Abel. “We are joining forces with a company that has more than 100 years of history and a well-established reputation for building and operating excellent power projects.”

At least one such project is already in the works, the 800-MW Sundance 7 combined cycle plant that TransAlta hopes to site next to the six-unit 2.1-GW coal-fired Sundance Power Station outside Edmonton (Figure 1). 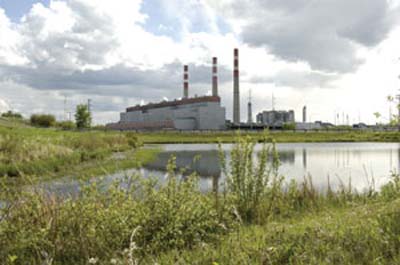 1. TransAlta and MidAmerican will develop an 800-MW combined cycle plant adjacent to the coal-fired Sundance facility near Edmonton. Courtesy: TransAlta

TransAlta has been trying to transition the Sundance facility away from coal, though Alberta regulators have applied the brakes to the idea. TransAlta had tried to retire the two oldest units at Sundance in 2011 after inspections revealed the boilers were beyond their design limits, but an arbitration panel rejected its request to terminate the power purchase agreement that covered them.

Consequently, TransAlta is having to spend $190 million to repair the boilers and bring them back into service, even as the Canadian federal government is in the process of finalizing “cap and close” regulations to reduce coal plant emissions. The rules would prohibit companies from making investments to extend the lives of those plants unless greenhouse gas (GHG) emission levels could be reduced to those of natural gas combined cycle plants. As the rules will grandfather in projects completed before 2014, the Sundance boiler upgrade should slip in under the wire.

With its deep roots in Alberta, TransAlta has long leveraged the province’s vast fossil fuel reserves for affordable power. Federal pressure to reduce carbon emissions has led the company to invest in carbon capture and storage (CCS) technologies, though progress has been slow. In May, TransAlta and its partners Capital Power and Enbridge pulled the plug on a CCS demonstration project after concluding that existing carbon markets could not support it.

Sundance 7 is planned to be a 2 x 1 facility. Orders have already been placed with Mitsubishi Heavy Industries (MHI) for two M501GAC gas turbines. Total costs are projected to be between $1.2 billion and $1.4 billion, and the plant should come online some time in 2016 or 2017.