Dr. Daniel Yergin, chairman of IHS Cambridge Energy Research Associates, is a Pulitzer Prize–winning author; leading authority on energy, international politics, and economics; and a recipient of the United States Energy Award for “lifelong achievements in energy and the promotion of international understanding.” He recently spoke with POWER about his latest book—and more.

Dr. Daniel Yergin’s latest book, The Quest: Energy, Security, and the Remaking of the Modern World, is a fascinating saga about the “quest for sustainable resources of energy.” It provides valuable insight into natural gas markets, including the shale gas revolution and its effect on worldwide power generation markets. The Quest is the follow-up to The Prize: The Epic Quest for Oil, Money & Power, for which Yergin received the Pulitzer Prize. 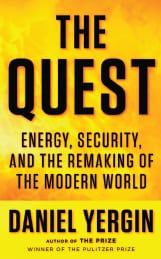 Congress has been ineffectual in formulating any useful energy policy proposals for the past several years. Instead, policy has set been set by stimulus money investment and loan guarantees for Department of Energy (DOE)–selected companies (with mixed results) and legislative inducements, such as the production tax credit, that are expiring. What should we expect in the future?

Yergin: The whole political discussion on energy is pivoting towards natural gas and even oil, given the extraordinary growth of shale gas and, now, tight oil—and high gasoline prices. Government incentives and mandates at both the federal and state level have been critical in the growth of renewables. Costs have come down, and these renewables have grown dramatically, but they are still small when measured against the total energy business. What’s ahead is less support. The United States, like other developed countries, is in a period of austerity, and that will affect the willingness to provide incentives and subsidies.

Yergin: One of the questions we have been examining is the comparative economics of natural gas as a transportation fuel either directly or to generate electricity that goes into a vehicle. Price matters, however, and I think that the picture is changing. There is a lot of momentum now for gas to enter the transportation system either in the form of LNG [liquefied natural gas] for long-distance trucks or as [compressed natural gas] in fleets, where there is a central charging point. The economics of natural gas versus diesel are becoming pretty compelling, and manufacturers are developing new truck engines. At this point, in terms of private automobiles, the hurdles, however, are much higher.

The U.S. Energy Information Administration is predicting that the U.S. will be exporting natural gas in a few years. Do you think the gas exporters will be able to overcome U.S. political obstacles to allow sizeable exports of resources? How do you see this playing out?

Yergin: Five years ago the debate was about how much LNG we would import. Now it’s about how much will we export! Natural gas prices in the United States are now unsustainable. They’re below costs in many cases. So new markets will be developed. In some parts of the country, natural gas has become a byproduct of producing oil. The conclusion I’ve come to is the result not only of our analysis but a lot of time on Capitol Hill, talking with decision-makers, as well as with utilities, industrial users, and gas producers themselves. There is some fervent opposition to LNG exports in some quarters! It adds up, in my view, to the likelihood that the United States will be a relatively minor LNG exporter, but political constraints will end up putting a cap on the number of projects.

How deeply will the Environmental Protection Agency (EPA) insert itself into the regulatory process for shale gas production now controlled by the states?

Yergin: As a member of the Secretary of Energy’s Advisory Board, I served on the committee that was set up last year to respond to President Obama’s call for an analysis of the safety of shale gas. With the exception of water, drilling has been regulated by states for over a century. That is a responsibility that was confirmed by a 1900 Supreme Court decision. The states have the experience and are closer to the public. The states that are new to drilling are setting up regulatory systems to manage the process, and there is a great deal of collaboration and learning among the states. Sometimes the impression is given that shale gas drilling is unregulated. In fact, it’s highly regulated.

I think the expansion of federal authority in place of the states will be a contentious issue, as conditions vary widely among states. We have addressed what we think are mistakes by EPA on methane in a paper called “Mismeasuring Methane.” It’s a cautionary tale. I think you also have to ask: What is the objective of expanded EPA regulation in light of the states’ responsibility?

Appeals may end up at the Supreme Court regarding the latest EPA air regulations (Mercury and Air Toxics Standards and Cross-State Air Pollution Rule) and greenhouse gas rules for power plants. What are your views of these rules passing judicial scrutiny?

Yergin: This is a question that will be decided in the judicial process and politically. As rules have come down, they would effectively remove coal as a contributor to new power supplies in the United States, unless there is some stunning advance in carbon capture and sequestration. In The Quest, I quote Congressman Markey of Waxman-Markey talking about “carrots versus sticks” on carbon policy—and then cite a CEO of one major utility who added a third category—“bayonet.”

The North American Electric Reliability Corp., in its annual report, suggested that the new EPA rules would significantly impact the nation’s system reliability. The EPA says “no” but has no grid expertise on staff, nor has the EPA cooperated with industry in such an evaluation. The Federal Energy Regulatory Commission may become the agency to reconcile the conflict. What is your opinion about the quick release of so many new EPA regulations on system grid reliability?

Yergin: Grid reliability is an essential part of fundamental energy security. As a nation, a society, and an economy, we are more and more dependent every day on the reliability of our electric power system. I think that it’s a big risk to implement a lot of regulations without careful analysis of system reliability and that the issue has to be examined very thoughtfully—and not just waved aside. There are enough dangers out there without inadvertently adding to them. In terms of bureaucratic perspectives, we have to remember the adage “You stand where you sit,” and system reliability is not something that is obviously in the wheelhouse of EPA. At least, Washington has to demonstrate that it has seriously considered this risk—and its ramifications.

DOE Secretary Chu and President Obama constantly tell the public that we must regain our national lead in manufacturing renewable technologies. Of course, China has such a lead that accelerating production to retake that lead doesn’t seem possible, particularly with today’s $1/watt panel prices. In what areas of the power generation business should the U.S. exert its muscle to maintain a world lead?

Yergin: A few years ago, China decided to promote wind and solar industries for two reasons. One, to help meet its rapidly growing electricity demand—which is growing as fast as ours did in the 1950s—and has now made China the biggest power system in the world. The other is to gain a leading position in global markets and in what the Chinese Five Year Plan calls “new industries.” The Chinese have moved very fast and have a major manufacturing advantage at least in solar panels. Wind is different, as it is not the same kind of manufacturing commodity business. The Obama administration has made a strong commitment to having the U.S. be a leader for the electric car. Certainly, electricity storage is one of the most important frontiers. I headed a task for the DOE on energy research and development, and one of the most significant lessons is the need to maintain a consistent commitment to appropriate levels of R&D spending.

Plant Vogtle just received the first license to construct a new nuclear plant in the U.S. in about 34 years. What are your predictions for the U.S. nuclear industry?

Yergin: Plant Vogtle is going ahead, and at least one other as well. But shale gas is reshaping the marketplace for electric power. That makes it harder for nuclear to compete, along with renewables. One of the striking things I point out in The Quest that is not generally well recognized is that nuclear power is still about 20% of our electricity, as it was a couple of decades ago, when our electricity demand was smaller. But we haven’t built any new plants. The reason is going from 58% operating levels to high 90s. It’s as though we’ve doubled our nuclear fleet without actually building any new plants. But if we don’t start building new plants in the next decade, nuclear will decline as baseload, and we will lose an important component in diversity of power sources. Whether they are plants as we know them today, or small modular plants, nuclear is one of the foundations of baseload power.

The Quest is a lesson book on history and geography, and many of the lessons relate to oil. Will these same lessons be played out again as natural gas becomes more of an internationally transported commodity?

Yergin: One big difference between The Quest and The Prize is that in The Quest, I seek to cover the entire energy spectrum, including a long section on electric power and the critical challenges of “fuel choice” for utility management. Oil, of course, is the global commodity. Until 2008, it looked like natural gas was headed in the same direction, and there was an expectation that increasing amounts of electricity in the United States would be generated with gas imported from the Middle East or West Africa or even Asia. But the huge growth in shale gas has abruptly terminated that vision. Once again, there are three distinct natural gas markets: North America, where gas is very cheap and abundant; Europe; and Asia, which has prices as much as seven or eight times higher than the United States. With Japan’s nuclear fleet shut down, imported LNG has become the vital default fuel for Japan, and that has further tightened the Asian gas market.

This whole shale gas story is an amazing saga of innovation. It is, in scale, the biggest energy innovation of the last two decades. I wanted to explain in The Quest how it came about. Its advent was generally recognized only around 2008. By that time, it had been 25 years in development. And it came about as it did because of the conviction, even obsession, of one man, George P. Mitchell. It’s very interesting to see the impact one person can have on an industry as huge and complex as energy—and, specifically, on the electric power business.

— Mark Axford, president of Axford Turbine Consultants LLC and a contributing editor to POWER, conducted and edited this interview.