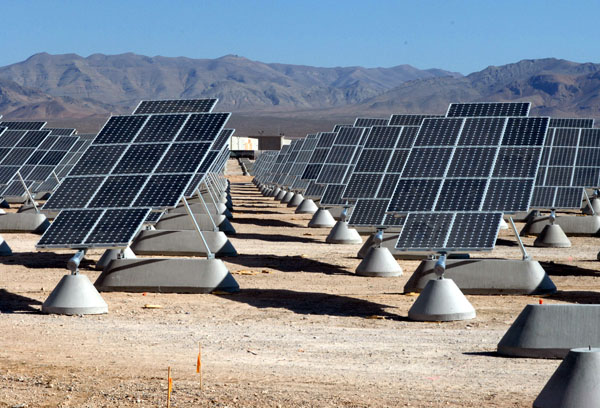 “Gas and renewable energy sources should be seen as allies rather than enemies.” New York City mayor Michael Bloomberg, a cleantech enthusiast, offered this advice recently at the 2013 ARPA-E Energy Innovation Summit. Others see the relationship between renewables and natural gas as symbiotic.

Renewables still have to overcome challenges. The focus for renewables must remain on seeking breakthrough technologies to lower costs and establish enhanced performance. Advanced materials innovation plays a key role among the strategies being explored to overcome these issues. Carbon pricing and subsidies are not long-term solutions. In the interim, natural gas can fill the role as a less-polluting energy source. Instead of fighting market forces, why not exploit the situation to better prepare for a more stable, durable transition to renewables and simultaneously work to ensure sustainable methods for the booming natural gas business?

Natural gas is a fossil fuel. It is, however, cleaner than other fossil fuels. Compared to coal and petroleum, natural gas allows major reduction in carbon dioxide, nitrogen oxides (NOx) and sulfur oxides (SOx) emissions. Particulate emissions are mostly eliminated, leading to a significant environmental benefit, especially with respect to mercury pollution from coal-fired plants.

Is this the end of coal? With the abundance of natural gas from unconventional sources (shale gas, tight gas sands, coal bed methane, methane hydrates in ocean sediments and near permafrost) leading to record low pricing, the energy landscape has changed. We already see headlines like “The golden age of gas,” “Natural gas rocks the energy world,” and “Natural gas: Killing coal, nuclear and maybe, the grid.” In a recent Wall Street Journal article on electricity generation growth rates from 2000 to 2012, natural gas increased its share from 16% to 30% while renewables showed a healthy jump from 3% to 12%. The share of nuclear energy dropped from 20% to 19%. At the same time, coal decreased from 52% to 30%. Production rates of natural gas have increased to about 30 Tcf annually while the spot price has plummeted to $4/MMBtu. In March this year, Los Angeles announced plans to abandon the use of coal-fired generation by 2025.

Shale gas extraction should be improved. Accessing shale gas has led to the onset of hydraulic fracturing or “fracking” involving injecting water containing chemical additives to extract the gas from shale rock. Some of the environmental concerns include water contamination and pollutant emissions from associated operations. Recently, the use of carbon dioxide has been proposed as a possible replacement of water. This is at an early stage, but you can see the potential—eliminating water usage and locking up carbon dioxide upon exhausting the gas supply. Of course, methane, the key ingredient in natural gas, is a greenhouse gas and leaks add to the problem. Recently, the International Energy Agency published the so-called “Golden Rules For a Golden Age of Gas” for responsible development of these unconventional gas resources. This would require both government and industry working together.

Natural gas can be converted to fuels and chemicals. This means less-polluting fuels and more petrochemical replacement. Sasol, a South African company, pioneered the gas-to-liquid conversion process technology and recently announced the building of America’s first commercial plant costing about $11 billion to $14 billion to produce 96,000 barrels per day of diesel and other liquid fuels. In March 2013, the Department of Energy (DOE) through its ARPA-E group announced $20 million funding to support development of technologies for bioconversion of natural gas to liquid fuels. Benefits include “decreased emission by up to 50%, compared to unconventional petroleum” and the reduced greenhouse gas impact from capturing and converting methane. Natural gas will also impact other markets. We are already seeing increased activity related to transportation, both on road and off road. Fuel switching will certainly lead to an increase in natural gas vehicles and growing adoption in marine and railway markets.

Renewable energy has momentum. At the end of 2011, over 565 GW of clean energy generation (wind, solar, small hydro, biomass/waste conversion, geothermal) was already in place globally. The natural gas surge may have some temporary impact but should not be a major distraction from continuing investment and deployment of renewable energy.