Tokyo Electric Power Co.’s new Kawasaki Thermal Power Plant claims the title of having the highest combined-cycle efficiency in the world: 59.1%. The new gas-fired facility is equipped with three 500-MW single-shaft combined-cycle blocks. Each block is based on the MHI M701G2 gas turbine, which is the largest gas turbine currently in commercial operation.

From lightning-fast bullet trains to sleek electronics, Japan is a country well known for its many technological accomplishments. Therefore, it’s not surprising that Tokyo Electric Power Co. (TEPCO), the largest utility in Japan, is at the forefront of attaining record thermal efficiency at its new Kawasaki Combined Cycle Thermal Power Station.

TEPCO’s Kawasaki Combined Cycle Thermal Power Station was designed to replace an existing 1,050-MW six-unit conventional power station that has supplied power to the Tokyo metropolitan area for more than 40 years, according to Carlos Koeneke, the vice-president of project engineering at Mitsubishi Power Systems. The first phase, which is called Kawasaki Thermal Power Plant Group 1, was completed in February 2009. The first two blocks were completed in 2007 and 2008; the third block was completed in 2009 (Figure 1).

Group 1 was constructed as a liquefied natural gas (LNG)–fired facility equipped with three 500-MW single-shaft combined-cycle plants, for a total of 1,500 MW. In addition to power generation, this new plant was configured to supply steam from the heat-recovery steam generators (HRSGs) to 10 neighboring industrial facilities. This higher efficiency steam supply allowed the elimination of lower efficiency old boilers, which were located in nearby facilities, resulting in significant energy savings and emissions reductions (Figure 2).

This new, more efficient and therefore more environmentally friendly first phase of the facility reduces the utility’s direct impact on the Kawasaki Bay ecosystem, Koeneke said. Using the gas turbines that generate two-thirds of the total power for Group 1 considerably cuts down on the usage of seawater for the steam cycle condensers. This, in turn, substantially reduces the discharge of warm water into the Kawasaki Bay and thereby lessens the plant’s impact on the nearby ecosystem.

Industries around the world are committed to reducing greenhouse gases such as carbon dioxide (CO2) and other polluting emissions, including nitrogen oxides (NOx). TEPCO is actively participating in this challenging effort by operating nuclear facilities, implementing renewable energy and ecology-friendly technologies, and replacing old and inefficient plants with state-of-the-art generating facilities, according to Koeneke. Combined-cycle power plants firing natural gas provide one of the cleanest and most efficient hydrocarbon-based generation alternatives. Additionally, these plants can be designed for large capacity and can be built relatively quickly.

Kawasaki Thermal Power Station is one example of TEPCO’s effort to replace existing power generation infrastructure with innovative energy efficient technology. This turnkey project designed and built by Mitsubishi Heavy Industries (MHI) involves phasing out an existing 1,050-MW conventional power plant operating at 43% efficiency with a two-phase combined-cycle project that will will be rated at approximately 3,000 MW when completed, with efficiency in excess of 59%.

In the future, second phase of this project, called Group 2, the existing six conventional units will be replaced with an additional three single-shaft combined-cycle blocks. When both Groups 1 and 2 are in operation, total NOx emissions will be much lower than current NOx emissions from the existing, smaller plant. The ultra dry low-NOx combustion system installed in the M701G2 gas turbine will achieve a 24 Nm3/h NOx reduction despite a capacity increase from 1,050 MW to 3,000 MW.

The M701G2 incorporates a high-efficiency 21:1 pressure ratio compressor and proven steam-cooled technology for the combustion liners, row 1, and row 2 blade rings. This blade ring cooling scheme is designed to provide turbine tip clearance control for better efficiency and is called “Active Clearance Control.” It results in increased clearance when the turbine is starting and tighter clearance when turbine load is increased (Figure 4).

In order to reduce emissions and increase operational flexibility, the single-shaft block start-up procedure was optimized to minimize start-up time. The improved sequence was tested during commissioning of Kawasaki Thermal Power Plant. The block load-up under hot start-up conditions was reduced to approximately 50 minutes from gas turbine ignition to combined-cycle full load.

The original 1,050-MW plant was converted from naphtha to LNG in the 1980s. The naphtha tanks were demolished to open space for the new combined-cycle plant. This new plant occupies only 1,000,000 square feet—one-third of the existing plant site’s total area.

Construction of the first phase of this project required much diligence because the construction team had to work around fuel and water lines that fed the existing conventional plant while it was in operation. Another complicating factor was that the original plant is located in a heavy traffic zone in the heart of Kawasaki. Construction of Group 1 involved engineering and logistical challenges to minimize traffic disruption while mobilizing large and heavy equipment. Another major construction challenge involved digging 65-foot-deep tunnels under the existing plant for interconnection of the new plant’s electric lines with the existing substation.

The project team used vertical HRSGs to minimize the plant’s footprint. The 3,800-ton HRSGs were designed and built with a modular approach to reduce assembly at the site. They were mobilized by barges from the MHI shipyard in Nagasaki (Figure 5).

Adding higher-efficiency steam supply from the HRSGs to nearby industrial operations, as noted above, allowed the elimination of lower efficiency old boilers. That switch resulted in savings of close to 400,000 MBtu (11,000 kiloliters of equivalent oil) per year and a CO2 reduction of 25,000 tons per year. The steam supply project was strongly supported by the city of Kawasaki and the neighboring companies.

Power output from two of the three new blocks roughly matches the output of the existing 43% efficiency (LHV) plant while resulting in a fuel consumption reduction of 17,100,000 MBtu per year and emissions of 892,000 fewer tons of CO2 per year. 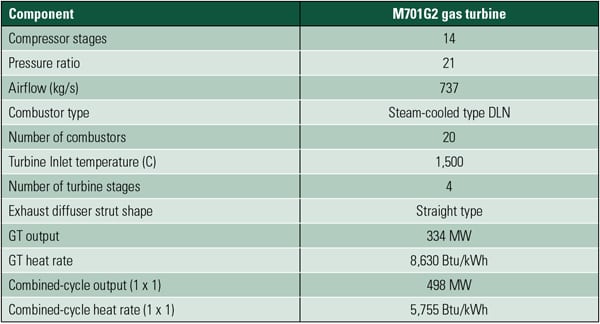 After putting Group 1 online in 2009, TEPCO’s Kawasaki Thermal Power Plant is now considered to be one of the most advanced combined-cycle plants in operation worldwide. The plant’s future also looks bright. Group 2 will involve the final decommissioning of the existing six conventional units. MHI is handling the first unit of Group 2 as a full turnkey project. The equipment is currently being manufactured, and construction of the new plant is expected to be completed by 2013.