The National Energy Technology Laboratory (NETL) reported in its January 2010 Tracking New Coal-Fired Power Plants report (PDF) that a total of 22 coal-fired units are under construction in the U.S., down from 28 a year ago. Another eight projects have gathered their permits but have yet to put a shovel in the ground. With a single plant in NETL’s category of "near construction," that’s a total of 31 units, representing about 17.4 GW of nameplate capacity, in the new plant queue. The good news: Eight plants representing 3.2 GW became operational in 2009. The report also notes the large number of units (12 units, 5.3 GW) that are "progressing," albeit very slowly, and few new plant announcements (10 units, 4.6 GW) over the past year. The primary reasons cited for the slow growth of new coal-fired generation are "today’s economic environment" and "regulatory uncertainty." Although not tracked by NETL, rising construction costs, now over a $1 billion for a moderately sized plant, have a king-size effect in delaying new project starts.

The central building block of any new fossil fuel–fired plant is the boiler island. My interest in writing this article was to explore one way to reduce the cost of manufacturing and installing new boilers: improved insulation practices within the boiler island. It is my opinion that the power industry requires a smarter and more economical insulation design on steam-generating boiler walls, especially when considering the rising cost and reduced availability of qualified field labor. Yes, the potential cost savings with improved insulation practices is small compared to the total plant cost, but every dollar saved is important. To paraphrase a quote attributed to the late Senator Everett Dirksen, "A million here, a million there, and pretty soon it adds up to real money."

Is Double-Layer Insulation Really Better?
Today the power industry accepts the assertion that a double-layer of insulation on membrane boiler walls creates a better insulation system than a single layer. That assumption was not always the case. Single-layer application on membrane boiler walls was a common practice within the power industry for many years. In fact, almost every manufacturer building boilers between 1968 and the mid-1980s in the U.S. specified single-layer boiler wall insulation unless the thickness required by operating and surface temperatures was greater than 4 inches. Double-layer application during that time was typically specified only when it was a special end-user requirement or the insulation material was not available in a single layer from the insulation manufacturer (Figure 1). 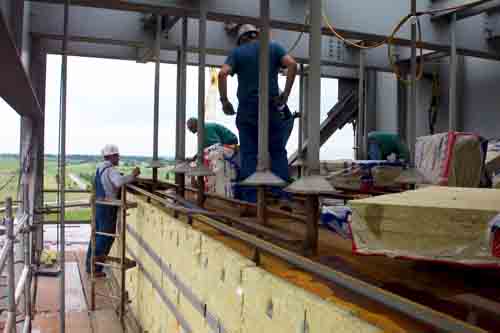 In designing a boiler, the original equipment manufacturer (OEM) must establish the cold surface temperature, or acceptable heat loss, on the boiler walls. This temperature typically ranges from 120F to 140F, although many accept 130F as an industry standard today. Next, the heat loss on the boiler walls at that temperature and the boiler casing temperature (based on the size of the boiler and superheater surface required to meet a desired steam outlet and exit gas temperature) is used to calculate the thickness of a given insulating material. The boiler warranty is often tied to how close the OEM meets the specified cold surface temperature, steam outlet temperature, and gas outlet temperature. Therefore, insulation specifications selected by the OEM and proper installation procedures are very important in determining final boiler performance. That is why every aspect of the insulation selection (such as material and installation cost, k-value at mean temperature, shrinkage, and material thickness availability, to name a few) must be closely analyzed (Figures 2 and 3). 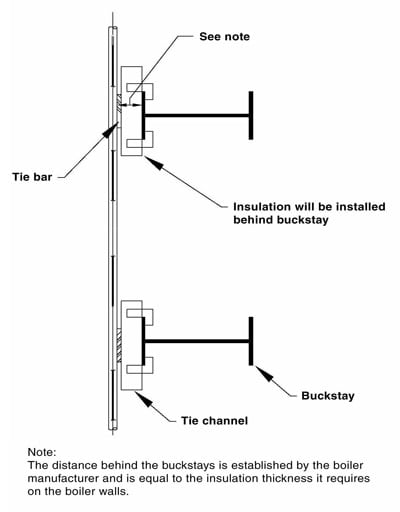 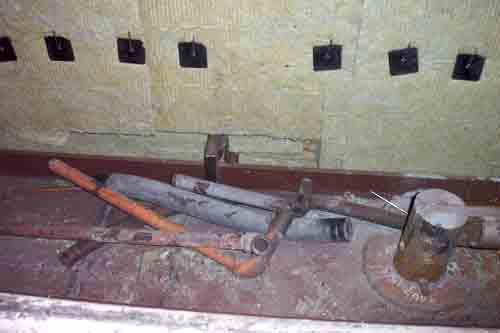 3. The insulation as installed behind the buckstay, as specified in Figure 2. Courtesy: BRIL Inc.

Single-thickness insulation has a long and successful history in the power generation industry. During the period from 1964 (starting with the membrane tube wall construction) to 1990 one particular boiler manufacture built and sold more than 250 radiant power boilers, 150 universal pressure boilers, 200 industrial boilers, and 100 process/Kraft recovery boilers. All of these boilers were designed and constructed with a single layer of mineral wool board on the boiler walls and a cold surface temperature of 130F. Significantly, the OEM has not reported any problems meeting boiler performance caused by using only a single layer of insulation on all of these units.

In the mid-1990s, several OEMs and purchasers changed their insulation standard to require a double layer of insulation, with the same overall thickness, on their boiler walls. The reasons behind this specification change remain murky to those of us who design and specify insulation systems for a living. If this change has its roots in an energy-saving decision, then one layer will perform as well as two layers at the same overall thickness, assuming the insulation is installed correctly.

Some argue that double-layer application is better than single-layer application because it eliminates gaps between individual insulation pieces and reduces the chances for hot spots on the outer lagging or casing surface. However, this is a labor supervision issue, not a design specification issue. Every OEM installation standard clearly states that gaps 1/16 inch or greater between boards or blankets are not acceptable regardless of how many layers of insulation are being installed. These standards require that all insulation pieces be tightly butted against each other and that any gaps between insulation must be filled with appropriate insulating cement before the outer lagging or casing is installed. These standards are independent of whether the insulation is applied in a single or a double layer.

My opinion is that using a double layer of insulation has several drawbacks. First, the cost to use double-layer versus single-layer insulation on boiler walls increases the cost of materials (insulation and additional fasteners) and labor. For example, a boiler with 100,000 square feet of waterwall surface covered with a 4-inch-thick double-layer mineral wool board meeting ASTM C-612 type IVB instead of a single board of the same thickness raises the cost to build that boiler by approximately $200,000. For the 22 new coal-fired units currently being built, this could amount to over $4 million in increased construction cost.

Going to a double layer also often increases the number of gaps and can increase the incidence of improper insulation applications. This situation occurs when the first layer of insulation is installed in a shoddy manner, followed by the second layer that forever hides the poor craftsmanship. Unfortunately, this occurs all too frequently, and only good supervision will prevent this situation from becoming epidemic on a job site. The following photo sequence illustrates how the improper installation of a double layer of insulation occurred during construction of a recent power station. Each of these examples violates the OEM installation specification (Figures 4 to 11). 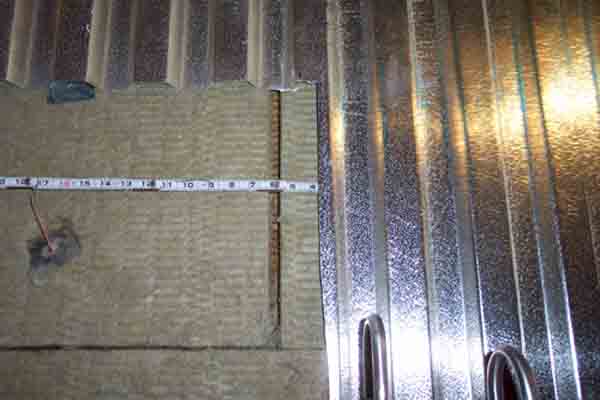 4. A double layer of insulation was installed with a gap between boards on the outer layer. Courtesy: BRIL Inc. 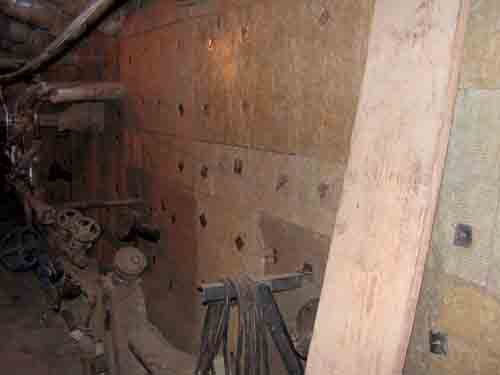 5. Note the gaps between the boards of the outer layer of insulation. These gaps provide a path for the heat energy to bypass the insulation and cause hot spots on the outer surface of the boiler. Courtesy: BRIL Inc. 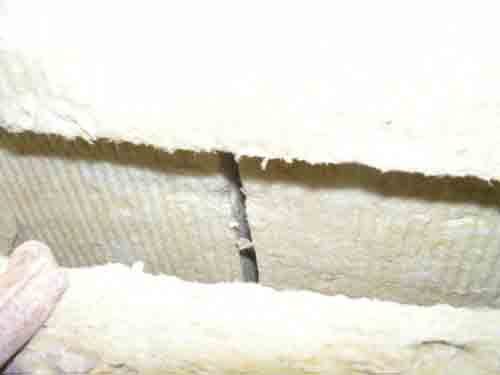 6. An exposed gap between boards on an inner layer of insulation was found during an inspection. Courtesy: BRIL Inc. 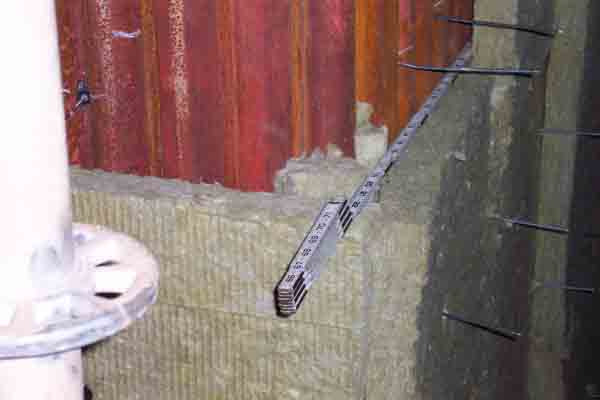 7. An insulation clip was not used to hold the first layer of insulation in place before the second layer was installed. Courtesy: BRIL Inc. 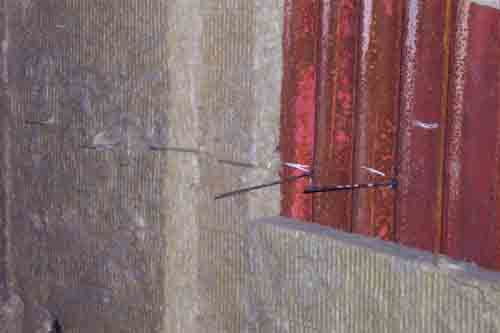 8. Another instance of the second insulation layer added without an insulation clip to hold the first layer in place. Courtesy: BRIL Inc. 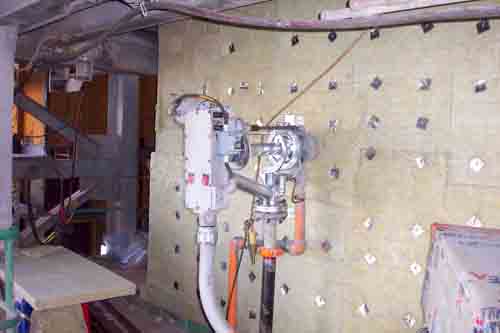 9. On this boiler wall, the contractor did not use a half-board to start the second layer of insulation at the corner to ensure joints between layers do not line up. When two joints line up, the hot side is provided a direct, uninsulated path to the cold side. Courtesy: BRIL Inc. 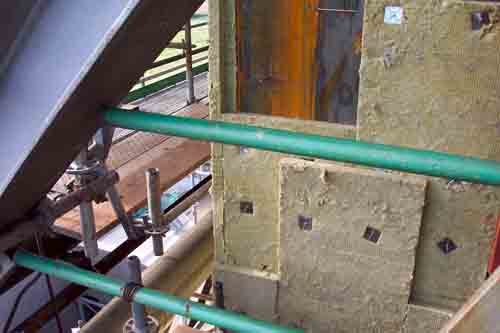 10. An outer layer of insulation is turned in the wrong direction on this wall. Each layer should be oriented in the same direction. Courtesy: BRIL Inc. 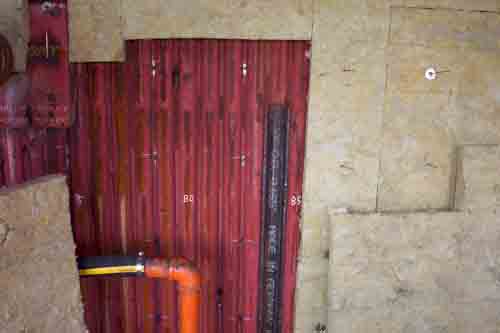 Pros and Cons of Double-Layer Insulation

—Gary Bases is the president of BRIL Inc., an independent consulting firm specializing in brick, refractory, insulation, and lagging. He is also the author of The Bril Book (a complete guide to brick, refractory, insulation, and lagging systems) and The Bril Book II (a technical manual that includes bril application drawings for the power generating industry).