Located on the scenic Japanese coastline, Tohoku Electric Power Co., Inc.’s new 446-MW Sendai Thermal Power Station Unit 4 is a combined-cycle plant that replaces three 175-MW coal-fired units that had been in operation for more than 50 years. The new plant features the first application of MHI’s 50-Hz M701F4 gas turbine, which provides a thermal efficiency boost from the old plant’s 43% to more than 58%. This change substantially reduces CO2 emissions. 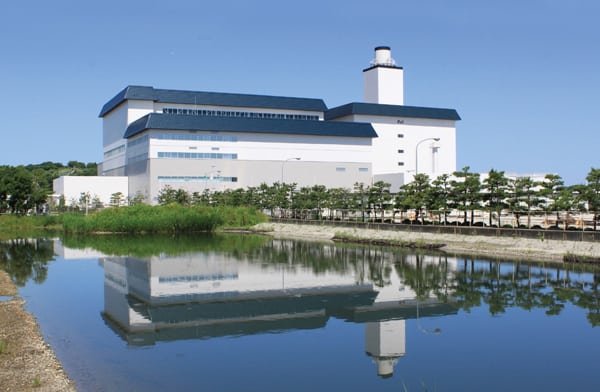 Sendai Thermal Power Station Unit 4 is situated near the Matsushima Prefectural Natural Park, which is considered one of the most picturesque spots in Japan. Matsushima Bay features approximately 250 pine-clad islands with trees twisted by wind and many unusual rock formations shaped by the force of ocean waves. Consequently, the Tohoku Electric Power Co. made it a top priority to design the new power plant building so that its architecture would harmonize with the natural beauty of its surroundings.

The new single-shaft combined-cycle plant began commercial operation in July 2010 and features the first application of Mitsubishi Heavy Industries’ (MHI’s) 50-Hz M701F4. It burns natural gas, which boosts the plant’s thermal efficiency from its previous 43% to more than 58%, according to Carlos Koeneke, vice president of project engineering for Mitsubishi Power Systems. The plant achieves an approximately 40% reduction in carbon dioxide (CO2) emissions by replacing coal with natural gas and attains an additional 20% CO2 reduction by increasing the thermal efficiency of the plant. The gas turbine provides 66% of the new plant’s combined-cycle power output; the steam turbine provides the balance.

“Special consideration was applied to the external appearance of the power plant building, which incorporates images of Japanese traditional architecture,” Koeneke said. “A white façade with tile roof design was applied. The final design required approval of the Japanese Government’s Agency of Cultural Affairs to be compatible with the surrounding of the Matsushima park, which has been designated a National Cultural Asset.”

The plant design team also minimized disruption of the natural landscape by reducing the number of stacks from the original three to one (as a result of replacing three units with one) and reduced the stack height from the original 120 meters (m, 393.7 feet) to 59 m. This change is especially noticeable when the plant is observed from the sea, according to Koeneke.

“Combined-cycle power plants firing natural gas provide one of the cleanest and most efficient hydrocarbon-based generation alternatives,” said Koeneke. “Additionally, these plants can be designed for large capacity and are relatively fast to build. This plant replacement shows Tohoku Electric’s commitment to improving the carbon footprint of its generating facilities.”

This replacement project was executed as a turnkey project by MHI. It involved phasing out three existing 175-MW conventional units operating with 43% efficiency and replacing them with one single-shaft combined-cycle unit of 446 MW with a net efficiency in excess of 58%.

“The new construction had to proceed while the demolition of the existing plant was under way,” Koeneke said. “This involved parallel activities given space restrictions and difficult crane access. The new Unit 4 occupies the space where Unit 3 and part of Unit 2 once existed. The distance between the new unit and the stack of Unit 2 yet to be demolished was merely 15 meters.”

Unit 4 foundation work was performed while Unit 2 demolition and debris removal work was in progress, because access was limited to one crane-span space. Extreme care and planning was needed to proceed with demolition of the Unit 2 stack. A protective net was installed around it to prevent accidents to personnel engaged in other construction activities (Figure 2). Demolition was achieved using a static fragmentation cutter method to prevent shocking the foundation.

Because the plant is located near a residential area, the construction team implemented careful provisions to reduce construction noise. They installed noise prevention sheets at the site boundary in addition to selecting low-noise and low-vibration heavy machines. A noise target of 64 dB (A) at the boundary was voluntarily imposed during the project.

The construction team maximized the recycling of waste to reduce environmental impact. Valuable waste, including ferrous materials, was sold. The construction team used approximately 35,000 cubic meters (m3) of concrete waste as a regenerated aggregate and reapplied it during construction as foundation concrete aggregates, refilled earth, and sand. This intensive effort resulted in recycling more than 97% of industrial waste; the exception was those materials containing asbestos, which were properly disposed of.

The construction team avoided heavy hauling during commuting hours; however, the concrete-pouring activities for the foundation had to be scheduled from early morning to late evening. During these activities, company staff were present at nine nearby school zone intersections to secure the safety of children.

Plant management estimates the annual CO2 reduction to be approximately 900,000 tons, which derives from a decrease from 0.832–0.885kg/kWh to 0.362kg/kWh. In addition, nitrogen oxide emissions have been reduced to approximately 1/20th of the original plant’s emissions—from 316 m3 of nitrogen oxides gas per hour (m3N/h) to 15 m3N/h.

The new plant reduced the amount of wastewater generated from 2,000 m3/day to 730 m3/day by eliminating the flue gas desulfurizer. This improvement resulted from the reduction of sulfur oxide (SOx) emissions associated with switching from coal to natural gas, according to Koeneke.

The gas turbine provides 66% of the combined-cycle power output generated in the new plant. The decrease in power generated in the steam cycle, and the plant’s higher efficiency, caused a considerable reduction in the condenser cooling requirement. Accordingly, hot water discharge to the sea—and the related impact on the ecosystem—has been reduced. The original plant discharged 12 m3 per second (m3/s) of seawater to the ocean, 10C hotter than the water taken from the ocean; in contrast, the new plant discharges only 10 m3/s of seawater with a temperature increase of 7C.

Solar Power’s Ascent in the Land of the Rising Sun

Tohoku Electric Power Co. is making an effort to generate electricity from renewable energy sources such as solar power while evaluating the impact of renewable energy on power systems as well as the cost of using renewable energy. The Law on Special Measures Concerning New Energy Use by Electric Utilities (RPS Law) was fully enacted in April 2003 and mandates that Japanese electric utilities use specific amounts of renewable energy as part of their energy generation portfolio.

Accordingly, in the next phase of this replacement project, the Sendai Thermal Power Station will integrate a 2-MW photovoltaic (PV) solar system. Another 1,000 tons of CO2 annual reduction is expected in 2012, when integration of the new PV system at the plant site is completed (Figure 3).