Now that U.S. utilities have taken federal stimulus funds and seamlessly built out two-way advanced metering infrastructure (AMI) connecting utility control centers and end users (ok, not completely, but let’s assume that the “stall-ulus” becomes a true stimulus), the question becomes, what’s next? At the moment, this new “comm layer” or “platform” has utilities planning in two directions: upstream and downstream from the smart meters.

A recent GTM Research report titled “The 2010 North American Smart Grid Deployment Survey” asked more than 50 leading utilities what the primary purpose of their end-to-end communications network is (see figure). Though 77% answered “advanced metering,” the real promise of AMI is enabling new applications, which was reflected in 63% answering “demand response/HAN [home area network] enablement.” The third-ranked answer, at 60%, was distribution automation (DA) and grid optimization. These results suggest that demand response/HAN enablement (making consumers smarter) and DA/grid optimization (making the grid smarter) can be considered the second wave of the smart grid. 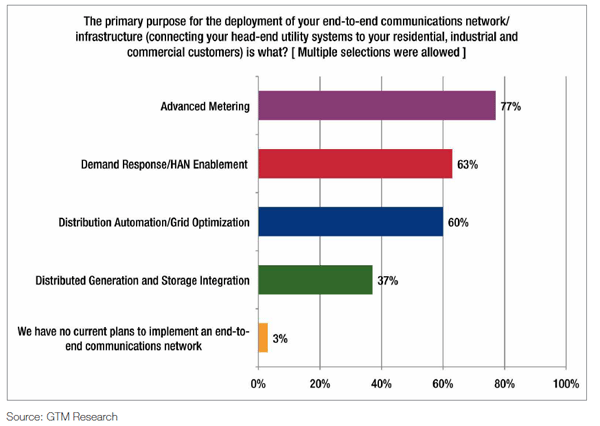 Though DA and HANs are in no way mutually exclusive, I would argue that HANs (which could include integrating electric vehicles) are going to generate the bulk of the smart grid’s long-term value, whereas DA represents a rather large basket of low-hanging fruit for virtually all distribution companies.

In the short term, our grids will provide very promising operational returns on DA investments, as the inefficiencies of our aging distribution grids will substantially benefit from an upgrade. In the long run, as we are able to increase automation and run the equivalent of least-cost routing algorithms on top of the grid for line losses and voltage correction, these returns will likely become asymptotic, as the bulk of existing inefficiencies will have been corrected (see figure). Right now, however, there’s an extraordinary business opportunity in the DA market as more states and governments move toward mandating grid efficiency (see Senate Bill 221 in Ohio, for example) and as ISOs and RTOs consider allowing efficiency gains to be effectively bid into the wholesale market.

Although the transmission and distribution behemoths are getting into the act, they are moving slowly. I wouldn’t be surprised to see new market entrants—like Current Group, which has successfully deployed real-time sensing and control technologies as part of Xcel Energy’s SmartGridCity, or Petra Solar, which provides real-time sensing as a result of mounting solar panels onto the actual distribution grid—gain significant traction.

On the other hand, and in the longer term, the potential value that can be generated by reinventing end users’ relationship to energy use is simply astronomical. Not only will consumer energy data be transformed into actionable intelligence, allowing homes and businesses greater efficiencies and greater cost savings (largely through automation and demand response programs), but this participatory network will also allow end users to perform countless new actions, including selling electricity from distributed generation.

Don’t take my word for it. Here is a small sample of companies that have jumped into the HAN space over the past 18 months: Google, Microsoft, Apple, Intel, GE, and Intel. And don’t be surprise to see everyone from Sony and LG to Comcast and Time-Warner to Best Buy following suit in the next 18 months.

Having said that, the consumer adoption challenge is looking like a hairy beast. Recent research from GE and Accenture highlighted the consumer education challenge. GE discovered that 79% of Americans are unfamiliar with the term “smart grid,” and Accenture’s research revealed a significant contradiction between consumer perceptions and actual knowledge related to energy efficiency programs. However, GE’s research also demonstrated that those who understood what the smart grid is were interested in supporting it, and its basic conclusion was that “smartening the public is as critical as smartening the grid itself.” Accenture’s research supports my own sense that the missing piece in terms of getting consumers on board is a straightforward and intuitive value proposition.

As for the utility side, there have been hiccups, including concerns about smart meter accuracy at two major utilities in California and Texas. Though I don’t give much—meaning any—credibility to those claims, they highlight the importance of clearly and proactively articulating to consumers the benefits of smart metering. But utilities have no real experience marketing to consumers, and I think there are glaring and substantial risks here. For example, in March, Duke Energy started canvassing 60,000 customers to take part in a new program; after six to seven weeks, 20 people had enrolled!

Due to the smart grid’s growth, the electric power industry has attracted heavyweight talent and big name executives from tangential industries such as IT and wireless communications (actually, the smart grid can rightly be viewed as the convergence of all three sectors). It’s time to get smart about what comes next. Now we need to pull talent from another industry: consumer products and retail. One way or another, utilities need to gain the talent and skill to effectively segment their customer base and target their marketing dollars. Otherwise, there is a real chance those dollars will be spent in vain, and the pace of consumer adoption, which will pace the growth of the entire smart grid industry, could slow.

—David Leeds in an analyst at GTM Research (http://www.gtmresearch.com), where he focuses on smart grid issues. He has lectured on the subject at MIT, Stanford, and the Wharton School.