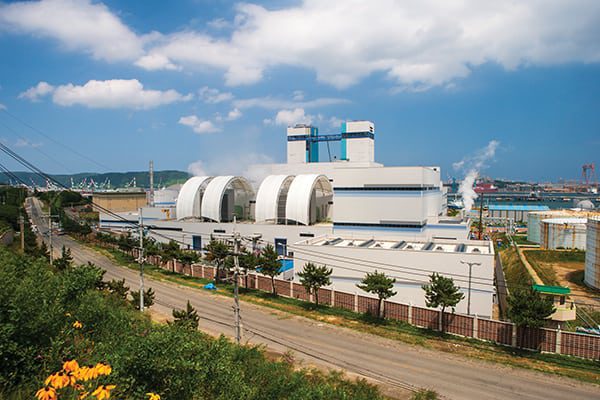 Combined cycle plants have the advantages of being extremely efficient and can be built in two phases when power needs peak unexpectedly. Ulsan 4 was built in response to the country’s 2011 power crisis for both reasons. The first task was installation of the combustion turbines in time to meet the 2013 summer peak demand. The steam plant portion of the project was completed a year later.

The Republic of Korea’s (South Korea’s) electricity consumption has grown an average of 5% annually over the past decade, and the nation remains the world’s ninth-largest energy consumer (based on 2011 data). South Korea also imports about 97% of the fuel used to produce its electricity because of a lack of indigenous fuel sources. Economic growth is largely determined by exports, which again are driven by a reliable supply of electricity. South Korea’s GDP is expected to grow 3.8% in 2014 as exports continue to rise.

The country’s energy needs heavily rely on nuclear, coal, and gas-fired generation. Liquefied natural gas (LNG) imports, nearly doubling over the past decade, fuel the tremendous growth in high-efficiency combined cycle plants. South Korea’s four nuclear power stations (with 23 individual reactors) provide up to about 30% of the country’s electricity and were slated to provide about half of the country’s capacity by 2024, according to its Fifth Basic Plan for Long-Term Electricity Supply and Demand, finalized in late 2010. However, South Korea’s nuclear industry experienced a dramatic slowdown in its expansion plans after Japan’s Fukushima Daiichi nuclear disaster in March 2011, followed by revelation of falsified nuclear construction certificates for parts used in 20 operating reactors in 2012. The government’s latest long-term electricity plan (released at the end of 2013) adjusted its goal for the nuclear share of South Korea’s generation down to 29% by 2035.

The loss of nuclear capacity put further downward pressure on the country’s reserve margins, which have remained below 10% since 2006, causing power shortages in parts of the country and an increased reliance on imported fossil fuels, principally LNG. On Sept. 15, 2011, the Korean Power Exchange was forced, for the first time, to use rolling blackouts to stabilize its system as reserve margins dipped to dangerously low levels during a summer heat wave. The day has been memorialized in the country as the “915 blackout.”

Shortly after the blackout, the government quickly approved construction of several new high-efficiency combined cycle plants. An expected 5,060 MW of new gas-fired combined cycles are planned for commissioning by the end of 2017. South Korea is also considering building six new coal-fired plants with a total capacity of 10,740 MW, starting in 2018 and extending through 2020 under the new power supply plan. (For more on the country’s energy challenges, see “South Korea Walks an Energy Tightrope” in the November 2013 issue.)

Korea East-West Power Co., Ltd. (EWP) is a wholly owned power generation company that was spun off from the government-owned (51%), vertically integrated Korean Electric Power Corp. (KEPCO) in April 2001. EWP is one of the five non-nuclear generation companies in South Korea. It currently provides about 11.1% of the country’s electricity consumption and has an installed capacity of 8,948 MW.

EWP’s response to its regional power shortages was to quickly begin development of the 947.5-MW Ulsan 4 combined cycle plant at its existing 8-acre coastal site in Ulsan Metropolitan City, on the coast about 400 kilometers southeast of Seoul. The site consists of 3 x 200-MW and 3 x 400-MW heavy oil–fired conventional steam plants built between 1970 and 1981—the last of the large-scale oil-fired units built by KEPCO. Oil currently accounts for less than 5% of the country’s generation mix.

Government approvals for the construction of Ulsan 4 were quickly obtained. However, EWP was under pressure to get additional capacity constructed prior to the 2013 summer peak period. In May 2012, EWP began constructing the first phase of the project—the simple cycle portion of the new 2 x 1 combined cycle plant. The combustion turbines entered commercial service on July 13, 2013, 18 days before the original targeted completion date.

Construction of the steam bottoming plant (heat-recovery steam generators [HRSGs] and steam turbine) began on Aug. 15, 2013. The project took only eight months for the planning and permitting phase and 27 months for construction of the entire project. The overall cost of the project was approximately $800 million.

The consortium of Marubeni Corp., Daelim Industrial, and Mitsubishi Heavy Industries (MHI) received an order for engineering, procurement, and delivery of the equipment as well as the construction and installation work for Ulsan 4. MHI supplied its 317.5-MW M501J CTs, the single steam turbine, as well as three Mitsubishi Electric 60-Hz generators. Daelim Industrial delivered two triple-pressure plus reheat HRSGs manufactured by Sedae Enertech in addition to other balance-of-plant equipment. The consortium delivered this equipment to Daelim Industrial, which was responsible for construction of the plant. KEPCO E&C also provided engineering services, while EWP provided project management of the entire project.

The CTs are configured with a steam-cooled, can-annular, dry low-NOx combustion system. A selective catalytic reduction system located within the HRSG further reduces the NOx emissions to 10 ppm or less, five times lower than the Korean national standard of 50 ppm. (For more information on the test and development of the M501J, see “The T-Point Plant: The Ultimate Validation Test,” in the June 2011 issue).

The two CTs and the steam turbine are installed within an enclosed building for weather protection and to be aesthetically pleasing (Figure 1).

A total of 13 M501J CTs have been recently purchased by South Korean utilities for five different sites (including Ulsan) because of the model’s excellent performance, efficiency, and positive customer reports. A total of 30 units have been ordered worldwide with 10 units now in service.

The success of the Ulsan 4 project is due in part to EWP’s project management skills, according to Soon Gu Doh, manager of EWP’s construction and engineering division. EWP uses advanced computer-based tools to manage every detail of the project, such as its Integrated Management System of Design Verification and its EWP Project Management System (e-PMS). The former is used for removing construction interferences with the help of 3-D design data. The partnership and EWP used e-PMS to share information quickly and accurately.

EWP’s project management team was responsible for developing creative and cost-effective means to reduce the cost and risks found in a project of this scale. For example, a Construction Innovation Center was established to “value engineer” the project. Also, the “Preemptive Risk Management” (Pre-RM) team was formed to identify ways to reduce operational risks based on EWP’s experience with plant operations.

No safety incidents occurred during construction of the plant, which is significant given the short construction schedule and very constrained site conditions. One safety tool used by EWP was the Loughborough University Safety Climate Assessment Toolkit developed by the UK Health and Safety Administration to gauge the safety climate of a project and aid the promotion of a positive safety culture. EWP also successfully used safety awareness systems on the construction site, such as “Keeper of the Construction Site” and “2 Strike Out System.” ■