Interest in hydrogen-powered fuel cells for transportation and machinery applications appears to have kicked up of late, with several companies announcing major developments.

Hydrogen Batteries for Spanish Port. The Port of Valencia in Spain in January said it is readying to implement a planned €4 million pilot project to power container-manipulating machinery with hydrogen batteries. The seaport, the biggest in Spain, and one of the busiest in Europe, owing to its centrality in the Mediterranean for traffic between Asia, Europe, and the Americas, wants to promote the use of hydrogen and fuel cells and reduce its use of coal and oil. The so-called H2Ports project will kick off as the port employs a prototype reach stacker and a prototype terminal tractor that are powered by hydrogen batteries. The project also includes installation of a mobile hydrogen supply station. The project has received funding from the Fuel Cells and Hydrogen Joint Undertaking, a European body that promotes adoption of hydrogen as a low-emission gas alternative.

Fuel Cell Forklifts Make a Buzz. French multinational retailer Carrefour on Nov. 22 showcased 137 Plug Power GenDrive hydrogen fuel cell–powered forklifts as it celebrated the grand opening of its supply chain distribution center in Vendin-le-Vieil, France. On Dec. 4, BMW Group also unveiled 70 hydrogen fuel cell-powered forklifts at its manufacturing plant in Leipzig, Germany. The forklifts were developed by a consortium that includes Linde Material Handling, along with Fronius, Günsel, and the Technical University of Munich. The consortium said it is mapping the entire value chain for hydrogen fuel cell systems for indoor logistics, including construction of hydrogen infrastructure. Then, on Dec. 5, Germany’s Federal Ministry of Transport and Digital Infrastructure provided €3.1 million to national innovation programs to procure 223 fuel cell vehicles (FCVs) for the German government. An additional €20.5 million will be spent to build 20 hydrogen fueling stations across the country, as well as for railway transportation.

Vehicle Maker to Pour Billions into Fuel Cell Production. Hyundai on Dec. 11 said it would invest $6.7 billion through 2030 to increase production of fuel cell units by more than 200-fold. The South Korean firm made the announcement as it broke ground on a second fuel cell system factory in Chungju.

Fuel Cells for Trains, Planes, and Ships. This past September, Alstom deployed its iLint Coradia fuel cell-powered train for passenger service in Germany’s Lower Saxony region. On Dec. 14, Norwegian joint venture HYON AS got grants from Norway’s government for development of two hydrogen fuel cell maritime projects: the Project Zero Emissions Fast Ferry, and Project SeaShuttle, which will develop a profitable zero-emissions container transport for short-sea markets using hydrogen fuel cells. On Dec. 4, meanwhile, Hydrogenics announced it had been selected to design and supply fuel cell power modules for a new lightweight aircraft, but it declined to name the customer. Over the course of 2019, Hydrogenics will develop and supply an ultra-light fuel cell system which will be the main propulsion unit for this aircraft.

Leaps for Hydrogen Infrastructure. Among several announcements concerning development or opening of new hydrogen stations was Linde’s announcement of its facility in Hannover, Germany. The new filling station (Figure 5) is one of the first of its kind to be built in Germany with funding from the federal government. 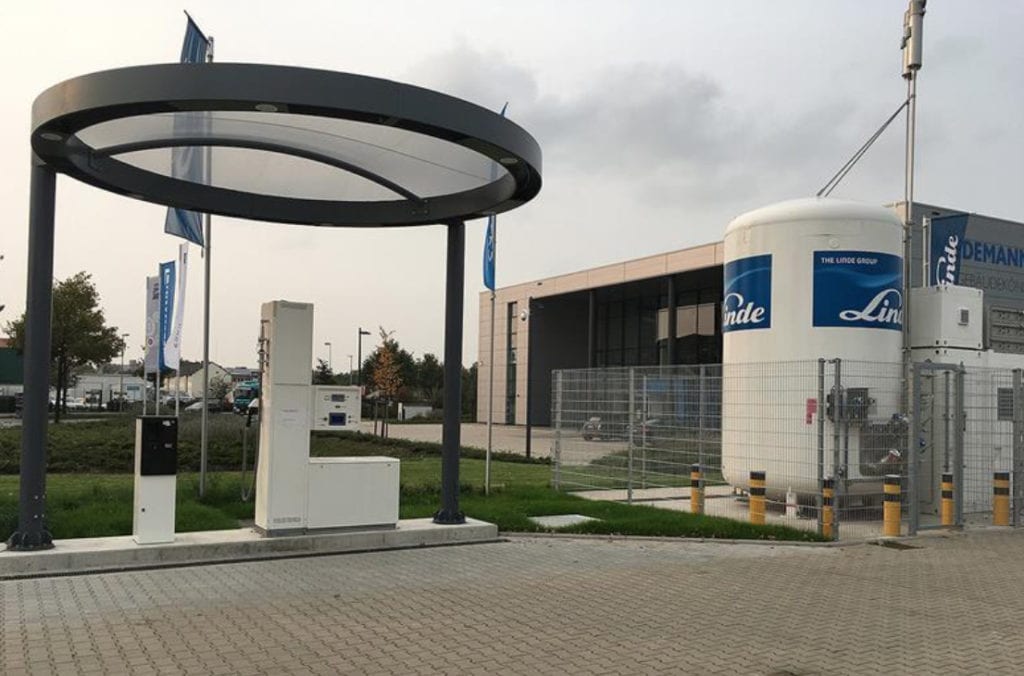 Linde noted that hydrogen produced with renewable power can “help expand the range of fuels available in the transport sector in a climate-friendly way.” The new station uses a new generation of its proprietary cryogenic pump, which converts the liquid hydrogen stored into a gaseous state compressed to 900 bar, and it will allow for up to 200 cars per day to refuel at the Hannover station.

Hydrogen Production for Energy Gains Steam. On Nov. 26, Air Liquide announced it would build the first world-scale liquid hydrogen production unit dedicated to hydrogen energy markets in the Western U.S—especially California, which has a rapidly growing hydrogen mobility market. The $150 million plant will have a capacity of nearly 30 tons of hydrogen per day, enough to fuel 35,000 FCVs, as well as material handling forklifts and heavy-duty trucks. The company also signed a long-term agreement with FirstElement Fuel to supply hydrogen to its retail liquid hydrogen fueling stations in California. “We are convinced that hydrogen is an essential sustainable energy vector of the future and a cornerstone of the energy transition,” said Michael Graff, chairman and CEO of American Air Liquide Holdings.