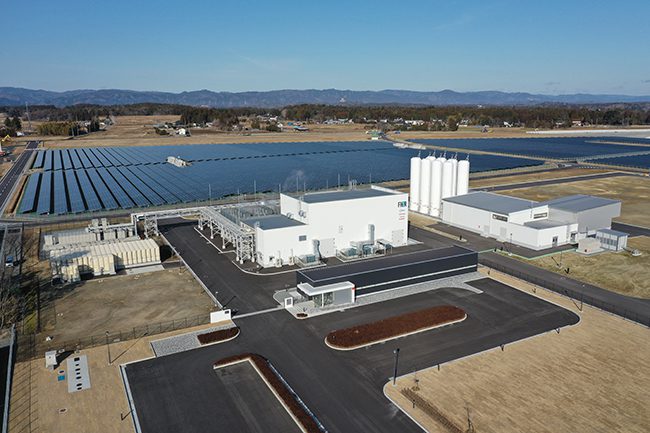 The Fukushima Hydrogen Energy Research Field is revitalizing an earthquake-stricken region and providing a remarkable boost to Japan’s ambitions to launch a hydrogen society.

While global interest in hydrogen produced from renewable energy may feel relatively recent, efforts to establish a role for hydrogen in energy systems have been underway in several countries since the 1970s. Japan prominently had explored the production of hydrogen since 1974, when it established the “Sunshine Project,” and research and development of fuel cell technology since 1978 under the “Moonlight Project.” However, the country did not adopt a formal strategy for hydrogen until 2014, when it declared in its 4th Basic Energy Plan that, owing to technological advances, “now is the time to conduct comprehensive deliberation on a ‘hydrogen society,’ which uses hydrogen as an energy.”

The government’s 2014 plan, issued three years after the Fukushima Daiichi disaster, responded to its rattled energy industry, including utilities stricken with steep losses owing to record imports of fossil fuels and uncertainty related to reactor restarts. The plan envisioned hydrogen would play a “central” role in the future of electricity and heat. But to introduce hydrogen as a fuel source and ultimately establish it in daily life and industrial activities, the government would need to drive a variety of research and demonstration efforts, the plan said.

Following the 4th Basic Energy Plan, Japan’s Ministry of Economy, Trade, and Industry (METI) established a council comprising industry, academia, and government to discuss ideal approaches to the future utilization of hydrogen energy. The agency then quickly rolled out a roadmap to promote the introduction of stationary fuel cells and hydrogen power generation. The roadmap envisioned a mammoth role for the New Energy and Industrial Technology Development Organization (NEDO), Japan’s national research and development agency, to promote power-to-gas (P2G) development and associated processes, such as hydrogen power generation and hydrogen production through water electrolysis.

NEDO stepped up quickly, kicking off the development of small-scale hydrogen production capacity of about 5 to 30 normal cubic meters per hour (Nm 3/hr) in 2014. As the effort gained steam, so did utility interest. In 2016, Toshiba Energy Systems & Solutions Corp. unveiled the “Fukushima Hydrogen Energy Research Field” (FH2R), a major project it was developing in collaboration with utility Tohoku Electric Power Co. Inc. and major gas and energy firm Iwatani Corp.

Backed by the government’s 5th Basic Energy Plan, which targeted P2G technology for storing and using hydrogen energy, FH2R gained specific significance as a national project. Construction of the project kicked off swiftly afterward in the town of Namie, Fukushima Prefecture, in July 2018, and by March 2020, construction was declared complete.

Significant in Its Own Right

For the past two years, FH2R has consistently been ranked as one of the world’s largest projects of its kind. According to project participants, FH2R uses a 20-MW solar PV array built on a 180,000-square-meter site along with grid electricity to power a single-stack 10-MW-class electrolyzer. Its developers say it can produce, store, and supply up to 1,200 Nm 3 /hr of hydrogen at rated power operation (Figure 1).

The facility’s alkaline water electrolysis system was designed and built by a subsidiary of Asahi Kasei, a 1931-founded multinational Japanese chemical firm. Asahi Kasei Engineering said it received the order for its Aqualyzer electrolysis system from Toshiba in 2017. The electrolyzer uses chlor-alkali membrane electrolysis, which is an established industrial process through which chlorine, caustic soda, and hydrogen are produced simultaneously, using brine and electricity. “After its installation in November 2019, several trial operations of the system were performed to confirm that the product hydrogen met the required quality standards, with hydrogen supply operation beginning in March [2020],” Asahi Kasei said. Project participants also tested the system’s performance in response to fluctuating power input.

Toshiba, which served as the project’s lead engineering, procurement, and construction (EPC) provider, is today responsible for the management of the project, as well as the overall hydrogen energy system. Tohoku Electric manages the power grid control system, and Iwatani handles the storage, supply of hydrogen, and the hydrogen demand and supply forecasting system.

According to Toshiba, the system has mostly performed as designed. “The FH2R system manages the production and storage of hydrogen according to the demand forecasts made by the hydrogen demand and supply forecasting system, and adjusts the amount of hydrogen produced by the hydrogen production unit to keep demand and supply balanced in the power grid,” it said. In light of recent electricity market reforms, meanwhile, project participants last year added a function to “provide appropriate control in the case of a reverse power flow in the solar photovoltaic system as part of our research aimed at improving the utilization of the hydrogen energy system as a means of electricity supply-demand balancing.”

That aspect will be necessary for two of the project’s most crucial objectives: to establish business models for hydrogen utilization and hydrogen sales “in order to realize demand-based production of hydrogen,” NEDO has said. Both objectives are already being tested and verified in a wide array of programs spearheaded by leaders in Namie.

Hard-hit by the 2011 Great Tohuku Earthquake and the Fukushima Daiichi disaster, Namie has embarked on a visionary reconstruction effort. In November 2020, it announced its full support for the FH2R “large-scale experiment” to establish a hydrogen-powered society. The municipal government has committed to utilizing hydrogen energy in commerce, agriculture, transportation, and education. Some program examples include a 2020-opened roadside station that uses hydrogen produced at FH2R. A 3.5-kW Toshiba “pure hydrogen” fuel cell installed at the roadside station provides a portion of the electrical power and heat used by the facility. The town is also developing an industrial area that will consume renewable power and pipeline-fed green hydrogen, presumably from FH2R.

Part of that effort entails a study to understand whether “it is possible to achieve zero-emission factories through the introduction of hydrogen generators and pure hydrogen fuel cells inside and outside of the factories, and through efficient transport and use of clean hydrogen.” Other initiatives include the introduction of a hydrogen-fueled car model, a “low-cost” hydrogen supply chain of mobile rack-equipped fuel cells that could supply heat and power to public facilities in Namie. Other projects include a verification test of a pole-mounted pipeline, a study to explore the feasibility of installing “pure hydrogen” fuel cells in households and commercial facilities, and a program to promote “hydrogen” tourism.

A Big Step for Hydrogen Research and Development

NEDO generally hails FH2R as a big step for hydrogen. However, the research agency is now planning a scale-up of the alkaline electrolysis system (as well as a 1.5-MW proton-exchange membrane [PEM] system that is being studied in Yamanashi Prefecture). These efforts will be boosted with a government-furnished planned investment of more than $3 billion over the next 10 years, Eiji Ohira, director-general of NEDO’s Fuel Cell and Hydrogen Group, said in March.

NEDO in August 2021 accepted a project led by Asahi Kasei and JGC Holdings Corp. to jointly demonstrate an alkaline water electrolysis system on a scale of up to 100 MW and a green chemical plant using hydrogen from renewable energy. “Demonstration and commercialization of the large alkaline water electrolysis system on a 2-digit MW scale will utilize feedback from FH2R in constituent technology developments together with module technology for parallel installation of electrolyzers to meet market needs from the perspectives of safety, durability, performance, and cost,” Asahi Kasei said. Asahi Kasei and JGC also plan to jointly develop an integrated control system for the green chemical plant to control the amount of hydrogen supply better and optimize plant operation in the process supplied by hydrogen feedstock originating from fluctuating renewable energy.