This May, when Xcel Energy’s High Bridge Combined Cycle Project entered commercial service, it marked the end of an era in St. Paul, Minn. The new 570-MW natural gas-fired plant, on the banks of the Mississippi River near downtown St. Paul, replaces the 270-MW coal-fired High Bridge power plant built in 1923. Like the old plant, the new one takes its name from the structure that spans the river nearby (Figure 1). 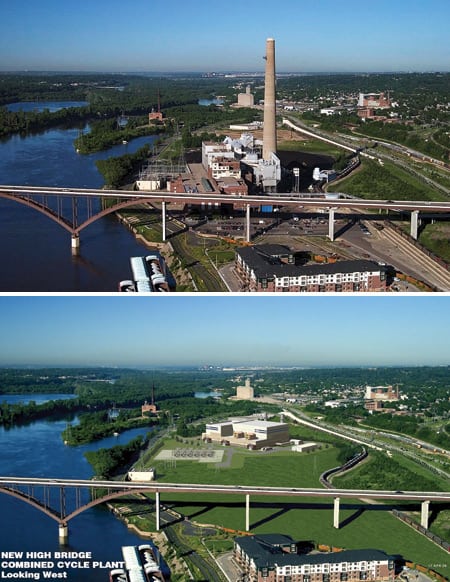 1. Before and after. Xcel Energy’s new 570-MW gas-fired High Bridge Power Project (top) has replaced the utility’s 270-MW coal-fired plant (bottom), adding 300 MW of capacity and substantially reducing the site’s air pollution and CO2 emissions in the bargain. The view is to the west. Courtesy: CH2M HILL

In 2003, rather than wait for federal air pollution mandates to kick in, Minneapolis-based Xcel Energy proactively opted to scrap the old coal plant in favor of cleaner and more-efficient gas-fired generation technology. At the project’s groundbreaking ceremony in May 2006 (see table), David Wilks, president of Xcel Energy Supply, explained that, “Last year, Xcel Energy kicked off its voluntary Minnesota Metro Emissions Reduction Project, or MERP, and this plant is a key part of it.”

In addition to building the new High Bridge plant, the MERP also aims to significantly reduce air pollution from two other Twin Cities coal-fired plants while increasing the capacity of one of them, at a total cost of approximately $1 billion. As part of the plan, Xcel has installed state-of-the-art emissions control equipment at its Allen S. King plant in Oak Park Heights, Minn., and is in the process of converting its Riverside plant in Minneapolis from coal to natural gas. The MERP is scheduled to be completed by May 2009.

The High Bridge Project will reduce air pollution from the site by the following amounts: SO2–99.7%; NOx–96.9%; particulates–91.5%; and mercury–100% (unlike coal, natural gas contains no mercury).

The plant has a conventional 2 x 1 combined-cycle configuration; each of its two Model 501F combustion turbines built by Mitsubishi Heavy Industries exhausts into a heat-recovery steam generator (HRSG) from Nooter/Eriksen, and the outputs of the HRSGs are combined to feed a Model TC2F steam turbine-generator, also from Mitsubishi.

High Bridge generates all of the hydrogen required for operations on-site using a Proton Energy Systems hydrogen generator that makes hydrogen from water. As did the old coal plant, it uses river water for once-through cooling, eliminating the need for a cooling tower and the possible generation of unsightly and unsettling “blue plumes.”

As soon as Xcel received approvals to build the new plant, the utility began a rigorous process to select the best partner for the project. After short-listing several firms, it chose CH2M HILL to handle engineering, procurement, and construction (EPC) of High Bridge.

One of the key reasons that Xcel selected CH2M HILL as the project’s EPC contractor was confidence in the firm’s ability to cope with two big constraints of the site: its proximity to downtown St. Paul and Minnesota’s extreme winter weather. For these reasons, Xcel required that all equipment be located indoors, in a new building. CH2M HILL’s scheduling challenge was how to erect the immense HRSGs at the same time as the building was rising in the same space. As part of its bid for the project, CH2M HILL proposed a unique, two-phase construction plan.

The first phase called for erection and close-in of the enormous new building during the first year of construction, to allow continued assembly of the combustion turbines and steam turbine in a controlled environment during the winter of 2006-2007. This step was feasible because Xcel had already arranged to buy the three turbines from another utility whose project had been cancelled after the units had been partially installed. Not having to wait for the turbines to be manufactured and delivered from Japan meant that their assembly in St. Paul could begin just six months after CH2M HILL was mobilized. “The turbines’ early availability easily shaved six months from what would be considered a ‘normal’ construction schedule for a plant as large as High Bridge,” said CH2M HILL’s Roy Snover, High Bridge project director.

Such an early building close-in would create a problem, however: It would make in situ erection of the 100-foot-tall HRSGs in their final location virtually impossible. Erecting an HRSG is as difficult as completing a three-dimensional jigsaw puzzle whose pieces are 440,000-pound tube bundles that must be hoisted more than 200 feet into the air and lowered into immense frames (Figure 2). That’s a task that simply cannot be performed inside a building. As the second phase of its construction plan, CH2M HILL proposed erecting the HRSGs outside the building as 2-million-pound “super-modules” and then moving them inside carefully and slowly. 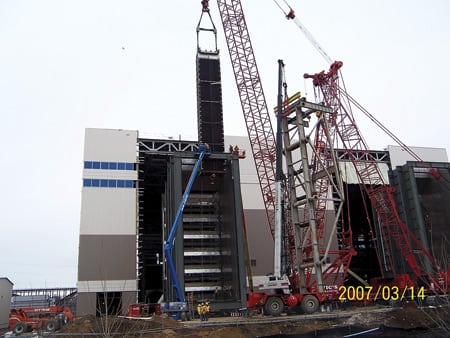 2. Up, up, and inside. A 440,000-lb HRSG tube bundle being lowered into one of the 1,000-ton “super-modules” assembled just outside the plant building. Courtesy: CH2M HILL

That’s just what happened. The super-modules were slid into place using a jacking system on rails lubricated with common dishwashing detergent. Although it took 15 hours to move each super-module, the process went exactly as planned and produced significant cost and time savings.

Xcel Energy brought similar innovation to its plan for another part of the High Bridge project: demolition of the old coal plant’s 570-foot concrete stack. On June 28, as hundreds of Twin Cities residents looked on from various vantage points on both sides of the Mississippi, the stack was brought down by a closely controlled implosion. “Demolishing the stack using the conventional method–deploying an army of workers with jackhammers–would have taken 14 months,” said Xcel’s Jim Zyduck, High Bridge plant director. In stark contrast, the implosion felled the stack in just seconds. Placing small amounts of explosives where they would disrupt key structural elements of the stack enabled gravity to do most of the work. The rest of the old plant will be demolished by the end of 2009, and Xcel Energy will take steps to make its land suitable for other uses.

A cleaner look, too

To meet the community’s expectations for the new plant in its midst, Xcel Energy and CH2M HILL worked with local groups to make its exterior attractive and visually compatible with the riverfront. Although the new building (Figure 3) occupies almost three acres and stands 11 stories high, the complete enclosure of the plant is a big plus. 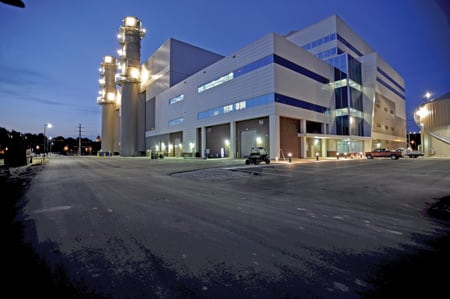 3. Curb appeal. Xcel insisted that the High Bridge facility be completely enclosed, due to its proximity to downtown St. Paul and to allow construction to continue during Minnesota’s harsh winters. The 11-story building erected to house the plant isn’t just attractive; it also makes High Bridge a quiet neighbor. Courtesy: CH2M HILL

Most other power plants are located outdoors–open and exposed. “A covered plant is much less conspicuous, and that’s what our neighbors wanted, largely in response to recent multi-use development in the area,” said Xcel’s Bill Myers, High Bridge project manager. “The new plant covers only half the amount of space as its predecessor. What’s more, its exhaust stacks are only one-third as tall as the old coal plant’s single stack.”

CH2M HILL’s inventive construction plan for High Bridge significantly cut project time and cost. But the two-phase approach also accomplished something even more valuable to Xcel and others. Expanding the plant’s construction footprint had a direct and positive impact on worker safety. In fact, CH2M HILL considers its most significant accomplishment on this job the fact that High Bridge is the first power project in Minnesota history to have won an OSHA “VPP Star Award” for safety performance (Figure 4). Over more than two years of construction activities, more than 1.5 million man-hours of work were expended without a lost-time accident. At the peak of construction, 400 union craft workers and subcontractors were on-site.

4. Rewarding risk aversion. Contractors and employees of Xcel Energy and CH2M HILL hoist a banner referring to the zero lost-time accident record of the 1.5 million man-hour High Bridge project. It was the first in Minnesota history to earn an OSHA “VPP Star Award” for safety performance. Courtesy: CH2M HILL

According to OSHA Team Leader Andy Smoka, CH2M HILL has been a “mentor” to all of its subcontractors and has “raised the level” for safety performance. “If [CH2M HILL] is awarded another project in Minnesota, it will be a bonus for the state and local subcontractors,” he said. “During our interviews of the craft professionals hired to help build High Bridge, many said that they want to be CH2M HILL employees.”

David Wilks of Xcel added that his company’s ongoing focus on safe practices remains unflagging now that High Bridge has been commissioned. “We take the safety of our employees, contractors, and visitors very seriously,” he said. “Our goal is to make sure people go home at the end of the day in the same condition in which they arrived. And we’re pleased that the High Bridge plant continues to achieve that goal.