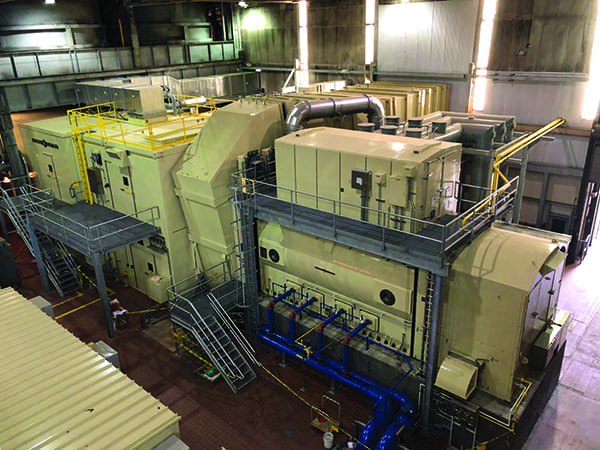 A group of project managers and engineers overcame a host of challenges to help an iconic Minnesota power plant complete its switch from coal-fired power to natural gas.

Converting a coal-fired power plant to burn natural gas has been a feature of the power generation landscape in the U.S. over the past several years. It’s a decision rooted in economics, and not just because the supply of domestic gas is abundant and usually cheaper than coal. Utilities also can save money by repurposing a coal plant to keep it operating rather than taking on the cost of decommissioning and demolition. 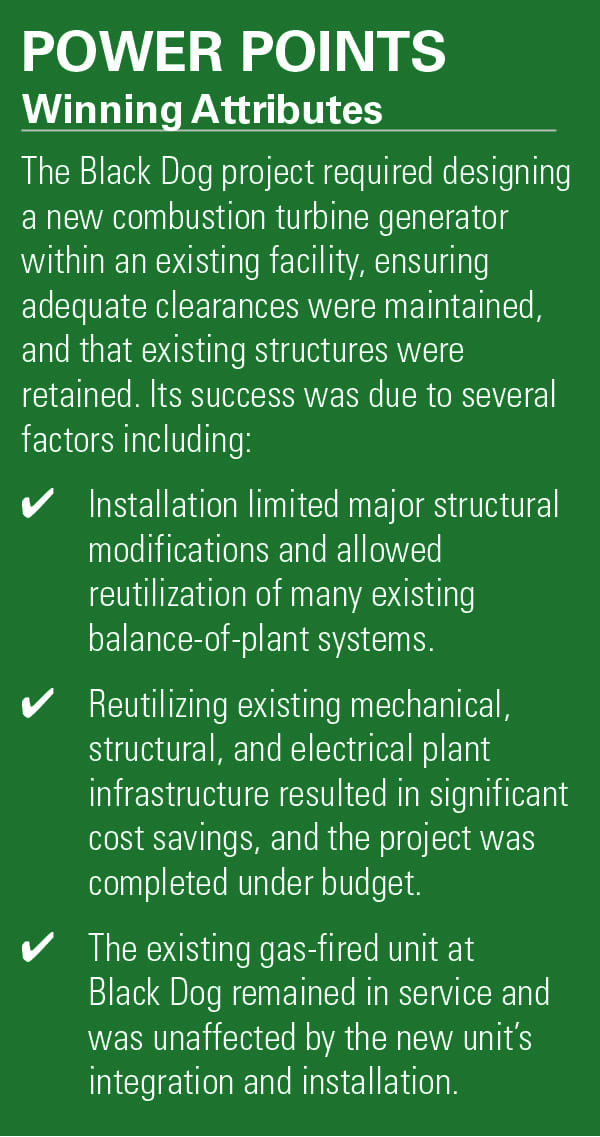 Xcel Energy saw that opportunity at its Black Dog Generating Station in Burnsville, Minnesota. Black Dog entered operation in the 1950s with two coal-fired units, and two more coal units were added later. The original Units 1 and 2 were replaced during 2000 and 2002 with one new gas-fired combined-cycle unit (Unit 5) in a repowering project. The replacement unit increased output by more than 100 MW over the original two units.

The project involved integrating the CTG and auxiliary equipment into an existing facility with space constraints, all while avoiding major structural modifications (Figure 1). Adequate clearances needed to be maintained, along with maintenance access, and the project needed to reutilize many existing balance-of-plant systems.

“This was certainly a very unique project due to being located in an existing facility, and with the need to repurpose existing equipment,” Brian Rust, project manager with Sargent & Lundy, the design engineer for the project, told POWER. “Xcel Energy was great to work with. Xcel Energy, GE, and Sargent & Lundy shared a very collaborative working relationship on the project.”

Xcel in an email to POWER wrote, “Xcel Energy has a long history in the Minnesota River Valley Community, and we’ve been a good neighbor here for more than a half century. Converting our Black Dog plant from coal to natural gas is part of our long-term plan to reduce carbon emissions 80% by 2030 while maintaining reliable, affordable electric service for our customers. Since the conversion was completed, we’re generating electricity more efficiently at this plant and significantly reducing air emissions.”

Rust said the project engineering took two years to complete. The project’s success, including keeping the iconic Black Dog plant operational—the facility takes its name from the Black Dog band of Sioux and their leader Chief Black Dog, who settled an area on the south bank of the Minnesota River around 1750—is an example of how U.S. power generators are reinventing themselves. Black Dog Unit 6 is a worthy recipient of POWER’s Reinvention award.

John Spence, Sargent & Lundy’s mechanical lead engineer on the project, said locating the CTG and auxiliary equipment in an existing space, one designed to accommodate a coal-fired boiler and steam turbine generator (STG), required major considerations for construction, including:

■ Locating the CTG power train to fit within the existing building so as to avoid critical items and limit structural modifications.

■ Allowing adequate clearance on the generator end to remove the rotor during major routine overhaul inspections.

■ Ensuring adequate clearance around the installation to maintain accessibility to the new unit and existing facility.

■ Ensuring the CTG inlet ductwork, piping, electrical devices, and HVAC systems are located and installed so as to avoid interference with the existing turbine hall bridge crane, while allowing adequate space to utilize the main and auxiliary hook for routine maintenance and major overhaul disassembly.

The Black Dog project began with demolition—the existing Unit 4, accessories, coal-fired boiler, and associated equipment had to be removed to make room for the new CTG, exhaust stack, and its auxiliary equipment and support systems.

Rust said the new CTG was installed on the existing Unit 4 STG pedestal. That required modifications, since the new CTG had a larger footprint. Exhaust gas from the new CTG is routed through a new 200-foot-tall exhaust stack through the existing boiler building and roof, installed in the location where the former Unit 4 boiler was demolished. A custom-designed side-inlet air system, including intake air treatment (filtration and evaporative cooling or heating) pulls air from the outside through the turbine building wall. The evaporative cooling system increases power output at higher ambient temperatures. Dry low-NOx (DLN) combustors control NOx emissions of the CTG.

“Some of the unique aspects of the project include the combustion turbine inlet,” Spence said, noting that traditional ductwork for GE turbines is located above the generator, and drops vertically into the turbine inlet to provide combustion air. In this case, that configuration would have directly interfered with the existing bridge crane and would have required substantial modifications to the building structure. Instead, the inlet duct design was modified for a horizontal, side-inlet duct arrangement that allowed installation of the inlet duct between existing building columns, minimizing modifications to the adjacent building wall.

“It’s a side inlet as opposed to GE’s usual top inlet,” Rust said. “GE redesigned their inlet structure. With this unit on the side of the building, going through the adjacent wall, it was the best path forward, but it required an additional new structure to bring it down to support it. It required a lot of playing with the dimensions to see how we could get it through that wall.”

Spence said placing the GE CTG and auxiliary equipment meant “we had to miss those existing beams” in the building structure. Said Rust: “We were able to shift the centerlines to miss major building steel. If we hadn’t been able to do that, it would have pushed the cost and complexity of the project to a degree I’m not sure anyone was comfortable with.”

Innovation Throughout the Project

The project included managers and engineers from Sargent & Lundy (S&L) and Xcel Energy. AZCO Inc. was the mechanical installation contractor, and Hunt Electric Corp. was the electrical installation and commissioning contractor. GE supplied the 7FA.05 CTG and associated auxiliaries.

Rust said innovation is evident throughout the project, including in how the existing pedestal—engineered and designed specifically for the former Unit 4 STG—was reconfigured to support the new, larger CTG.

“The CTG footprint is larger, and the foundation design needed to accommodate increased weight, new rotational forces and moments, and new operational vibration,” Rust said. “Xcel Energy and S&L collaborated during several detailed design review meetings to determine the most-desirable solution, which included the installation of an expanded turbine tabletop, cantilevered and dowelled into the existing STG pedestal, demolition of existing and installation of new tabletop reinforced concrete beams, and a new 3-foot by 8-foot reinforced concrete column spanning 35 feet from the turbine tabletop down to the existing STG pile cap foundation.”

Other innovative construction included the installation of the new 200-foot-tall CTG exhaust stack with a silencer, which extends through the boiler cavity and building roof. A bottom-supported stack would have required new elevated support steel framing. Instead, the existing boiler suspension steel was utilized to hang the exhaust stack just below the building roof. Said Spence: “The stack was proportioned and routed to fit through the main boiler support girders to avoid major steel rework. An additional 30-foot stack section sits atop the boiler suspension steel to exhaust the gas safely to the outside.”

Spence and Rust said that design is not common, and its use at Black Dog can prove its viability “for future projects attempting to repower their facilities or convert their coal- or oil-fired units to natural gas-fired or other cleaner fuels to satisfy new environmental regulations.”

Said Rust: “We faced quite a few challenges to get this to work within the existing facility,” including “designing and constructing a new combustion turbine while not interrupting operation of the [existing generation unit] already on site. The construction crews deserve a lot of credit.” ■