Nevada returned to the top spot of the U.S. Census Bureau’s list of fastest growing states in 2007, posting a 2.9% increase in residents. It was the fastest-growing state in the nation in 19 of the past 20 years, losing out to Arizona only in 2006. The allure of desert living brings not only new people and business but also adds stress to power grids, increases demand on limited water supplies, and exacerbates concerns about worsening air quality. Balancing these concerns with the need for reliable and affordable electricity supplies is perhaps the greatest challenge for utilities serving the southwest U.S.

Nevada’s electric power distribution system is unique in the U.S. Reno-based Sierra Pacific Power Co. (SPPC) is the principal electric utility for most of northern Nevada and the Lake Tahoe area of California. It is a wholly owned subsidiary of Sierra Pacific Resources (SPR), which also is the holding company for Nevada Power Co. (NPC), the electric utility for southern Nevada. You might be surprised to learn that there is no direct electrical interconnection between these sister utilities (Figure 1). 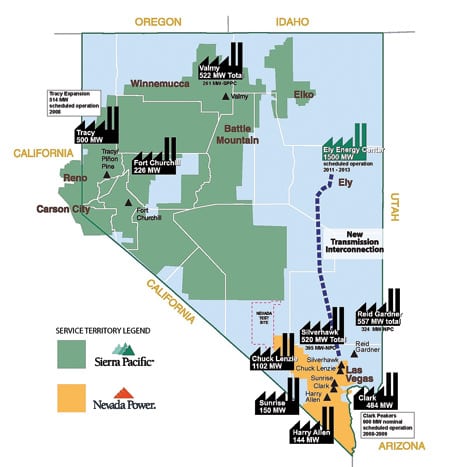 SPR is responding to the challenges of finding new power supplies quickly to economically serve existing loads while looking to the future with announced plans to construct a new $500 million 250-mile transmission line to unify the service territories. The transmission line is part of SPR’s masterpiece: Its proposed Ely Energy Center includes two 750-MW coal-fired units scheduled for 2015, followed by two 500-MW integrated gasification combined-cycle units at a later date.

The importance of the new transmission line goes beyond generation resource sharing between the two utilities; it also will have sufficient capacity to accommodate the needs of future wind, geothermal, and solar projects. Nevada’s Renewable Portfolio Standard calls for 20% of its generation to be powered by renewable resources by 2015. The new coal-based projects will also bring needed fuel diversification, as 75% of Nevada’s generation is fueled by natural gas.

The 564-MW Frank A. Tracy Combined Cycle Plant, located adjacent to the utility’s Tracy Generating Station east of Reno, entered commercial service on June 6, 2008, after a 29-month construction period (Figure 2). Tracy, the largest generating plant built in northern Nevada since Sierra Pacific completed the second unit at the Valmy Generating Station in 1985, also effectively adds 50% more capacity to the Sierra Pacific grid, taking it from 1,029 MW to 1,543 MW. The addition makes northern Nevada virtually energy self-sufficient and immune to volatile out-of-state power purchase costs. In 2006, SPR generated only 43% of its power needs and imported the remainder from out-of-state power suppliers through long-term contracts and periodic purchases on the spot market. 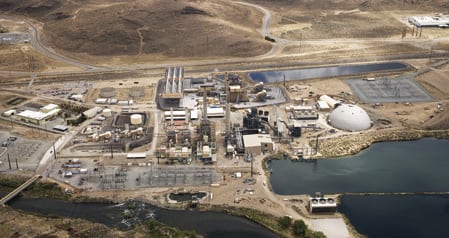 During the July 17 Tracy Combined Cycle Plant dedication, Michael Yackira, president and CEO of SPR, and Nevada Governor Jim Gibbons symbolically cut chains instead of the customary ribbon, to symbolize the end of northern Nevada’s dependence on outside energy suppliers. Yackira summed up the need for the Tracy project in these words: “Our desire is to be more self-sufficient as a state. To do that, we have to build new power plants.”

Over a 20-year period beginning in the mid-1980s, the company did not build any significant amount of new generation, but now it has plans to invest as much as $1 billion a year over the next few years in new plants and upgrading existing plants.

SPR started developing new generating resources with the 1,100-MW Chuck Lenzie Generating Station, located 20 miles northeast of Las Vegas, which went commercial in April 2006. It was the first company-owned power plant completed since 1995. NPC also opened its checkbook and purchased a 75% interest in the 560-MW Silverhawk Power Station that same year. In April, NPC announced that it had also purchased the 598-MW Bighorn Generating Station, located 35 miles south of Las Vegas, from Reliant Energy for approximately $500 million. There is no doubt that SPR is serious about taking charge of the power generation resources that serve its customers.

Although rising natural gas prices will continue to put upward pressure on rates in the future, Tracy, with the lowest heat rate of any plant on Sierra Pacific’s system, will moderate future fuel price increases. Yackira noted that, “While power bills won’t be going down anytime soon because of this plant, Sierra Pacific still views this state-of-the-art facility as a positive in the long run for consumers, the environment, and efficiency.”

Yackira went on to note another advantage the plant brings to northern Nevada: flexibility. “If power can be purchased at a lower cost elsewhere, the company can buy it, but this plant can meet 85% of northern Nevada’s power needs.”

The principal contractor for the Tracy project was LG Constructors, a CH2M HILL subsidiary, for engineering procurement and construction services. The $467 million project employed about 500 tradespersons during construction. CH2M HILL was also responsible for start-up, testing, and initial operation of the facility (Figure 3). 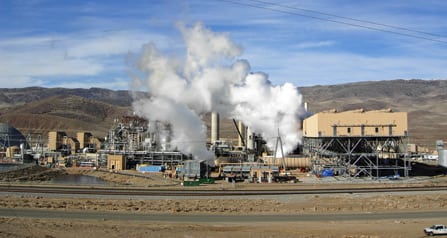 3. The tie that binds. With the commissioning of the Tracy Combined Cycle Plant, Sierra Pacific no longer needs to import expensive power from California to meet northern Nevada’s power needs. Courtesy: CH2M HILL

CH2M HILL’s project work with SPR extends beyond the Tracy project and includes the recently completed 75-MW Harry Allen Unit 4 near Las Vegas and the 600-MW Clark Station Peaker project in Henderson, which is nearing completion. After all, success breeds more success.

Major equipment for the Tracy 2 x 1 combined-cycle plant (Figure 4) came from a familiar group of suppliers and included: 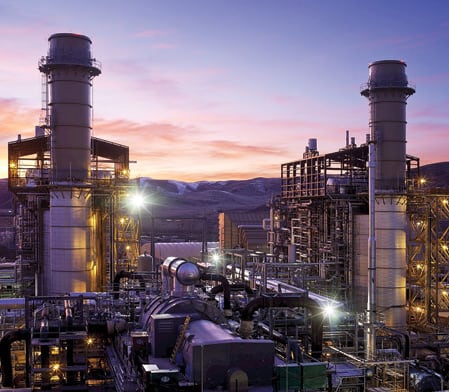 The project team faced challenges that are all too common these days. Sourcing raw materials such as structural steel, piping, and electrical cables was a problem that caused delays in delivery and threatened to slow the construction schedule. However, the project team was able to develop successful contingency plans and workarounds when deliveries were delayed and wrestled the project back on schedule.

Another challenge was finding adequate skilled labor with experience in large power plant construction when lucrative projects–such as oil sands work in Canada–lure skilled workers out of state. Because most of the workforce in the area is focused on the commercial industry of hotels and entertainment, the team’s execution plan incorporated the use of skilled subcontractors from adjacent states. The prospect of working in the beautiful area outside of Reno certainly was an attraction for some workers.

Planning the erection sequence is extremely important, even when sufficient skilled labor is available. It’s the essence of any fast-track project. Poor planning will result in low productivity caused by congestion in the primary work areas. However, with good planning the required peak labor force can be flattened thanks to higher labor productivity, particularly during the last six months of the project, when the gas turbines, steam turbine, and HRSGs are all being erected simultaneously with the major piping and electrical cable and conduit installation.

One way the team avoided the inevitable site congestion was to develop a plan whereby the majority of the piping and conduit was installed underground before placing the larger equipment. This approach allowed the team to complete a significant amount of the piping and electrical work early in the project; it spread out craft labor needs and reduced the peak labor requirement. The second benefit was significantly increased labor productivity, as pipefitters installing steam piping weren’t tripping over electricians erecting cable tray in the same area at the same time.

Luckily, the team was able to install underground utilities during a time of the year when Reno had moderate temperatures, rather than during its sometimes harsh winter.

The team is proud of its safety accomplishments, especially the fact that more than 1.2 million work hours were expended without a lost- time accident. It was CH2M HILL’s sixth consecutive large power project exceeding one million hours with no lost time accidents. “This accomplishment is a tribute to all site workers embracing and adopting the ideal that workplace safety is a lifestyle,” said Phil Schoenecke, CH2M HILL site construction manager (Figure 5). 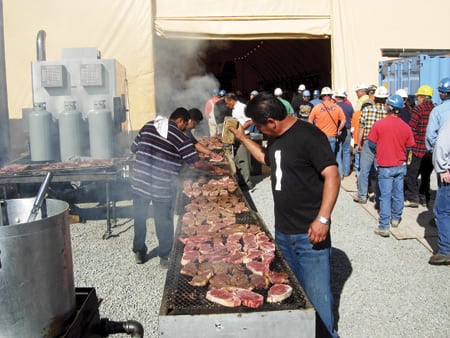 CH2M HILL’s performance on the Tracy project reflects the value placed on having every employee return home each day without injury, being good stewards of the environment, and striving for continual improvement. CH2M HILL calls this program “Target Zero” to reflect the goal of having every employee achieve three zeros on every project:

Site safety orientation began with the project mantra: “Everyone goes home at the end of the day in the same condition that they came in.”

A key indicator of a strong safety program is the relationships among the team members. A strong culture of safety, communication, and collaboration from the craft laborers at the Northern Nevada Building Trades, CH2M HILL staff, and the SPPC project team was responsible for the project’s outstanding safety record.