In late February, the largest gas turbine ever manufactured by GE Energy at its Belfort plant in France began a 30-day journey by land and sea that will take it to a new power plant in Spain. The Frame 9FB gas turbine—which is also the first built completely in Belfort—was loaded onto a special, wide-load truck that carried the 310-ton machine (Figure 1) along RN 83 in France from Belfort to Colmar and Strasbourg. In Strasbourg the gas turbine was loaded onto a barge on the Rhine River for a five-day journey to Rotterdam. There the machine was placed onto a ship for a voyage to the seaport of Tarragona in Spain. 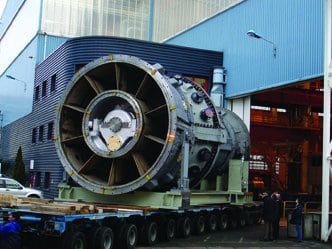 The gas turbine’s final destination was the 800-MW Plana del Vent combined-cycle power plant in Vandellos, 80 miles southwest of Barcelona. The unit is one of two Frame 9FBs installed at the plant, which is owned by Gas Natural SDG, SA of Barcelona.

In addition to the gas turbines, GE is supplying Plana del Vent with two D11 steam turbines (with 48-inch last-stage buckets), 330H generators, heat-recovery steam generators, and an integrated control system. The plant’s two 209FB combined-cycle units, rated at 58% efficiency, are expected to enter commercial operation in June and July 2007. Natural gas will be the primary fuel, with gas oil as backup. In addition to supplying the equipment, GE has signed a 12-year O&M contract with Gas Natural.

The GE Frame 9FB is the world’s most advanced, air-cooled, 50-Hz gas turbine. Its dry, low-NOx2+ combustors limit emissions of the pollutant to 25 ppm.