According to the U.S. Energy Information Administration (EIA), natural gas–fired plants led all other forms of power generation in both new startups and retirements by large margins over the past decade. 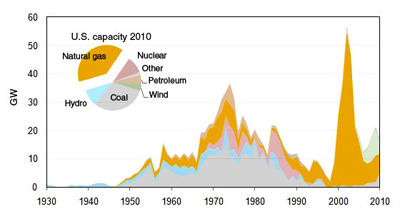 1. The vast majority of new capacity since 2000 is fueled by gas. Source: EIA

Meanwhile, even as many utilities are looking to retire older coal-fired plants, or have done so recently in response to tightened regulations, natural gas still accounts for the lion’s share of retired capacity over the past decade. About 64% of total generator retirements between 2000 and 2010 were gas-fired.

As might be expected, the bulk of the retirements were older steam turbine generators, which accounted for 72% of the retired capacity. The average age of the retired generator was 48 years, and some had been in service since 1912. Still, some combined cycle capacity (9% of the total) was also retired, in part because of an excess of supply during the same period.

Natural gas constituted 39% of total U.S. generation capacity at the end of 2010. According to the EIA, much of the shift toward natural gas can be attributed to power industry restructuring in the 1990s. Since then, new construction has been dominated by independent producers who favor natural gas due to shorter construction times and lower capital costs for gas-fired plants.