The Dresden plant was originally launched by Dresden Energy LLC, a subsidiary of Dominion. Dominion started construction on the plant in 2001, expecting to start operations in late 2003. However, bad weather and labor disputes during the 2002–2003 winter began a series of delays that pushed the completion date back again and again. In February 2003, one of the main contractors abruptly removed its equipment and personnel from the site, apparently because of a breakdown in contract negotiations with Dominion.

Dominion had planned to use water from the adjacent Muskingum River for cooling, which required dredging a 150- x 1,000-foot channel for the intake. But in July 2003, after Dominion applied for a dredging permit, the U.S. Army Corps of Engineers (COE) put the brakes on the plan, requesting additional information and an explanation for why alternative options were not considered. These would have included tapping into a nearby well field or accessing deeper pools downstream from the power plant. Among other objections, some local residents were concerned that dredging would endanger the local mussel population. In September, the COE again put off making a decision. That delay led Dominion to lay off almost all the remaining workers in December, bringing the project to a standstill.

The county had originally given the plant a 10-year tax abatement that would run out in 2013. In exchange, Dominion had committed to donating $4 million a year to local school and community college districts. But the repeated delays began sucking the value out of that abatement.

The project sat idle for several years, even though the major equipment necessary for completion had been procured and placed on site. Though the COE finally granted the dredging permit, by 2006, the price of natural gas had more than doubled since late 2001, greatly changing the economics of the project. In mid-2007, after a review of its asset portfolio, Dominion decided to sell the unfinished plant to AEP for approximately $85 million. At the time, AEP expected the plant to be operational in 2009 or 2010. But again, those estimates proved too optimistic.

Internal cash flow issues prevented AEP from immediately ramping up construction. The price of natural gas jumped again in 2008, further complicating the planning. Then, when the recession began later that year, demand for electricity fell and there was insufficient need for the new capacity. Meanwhile, the half-completed plant inched along with a skeleton crew.

Not until January 2011 did AEP feel the time was right to finally complete the plant. That month, it accelerated construction and hired 300 workers to wrap things up. The river was dredged for the intake, using the permit Dominion had obtained but never used. Construction was complete in late 2011, and testing and inspections were wrapped up in January. On February 1, AEP finally commenced commercial operations.

AEP officials were clearly happy to see the plant at last coming online. "This is another step in the transformation of AEP’s generating fleet as we continue to diversify our fuel mix to improve our environmental footprint and provide economical electricity for our customers," said Nicholas K. Akins, AEP’s president and chief executive officer. "Natural gas will become an increasing part of AEP’s generating portfolio in the coming decades as a result of the development of shale gas reserves and new environmental regulations." 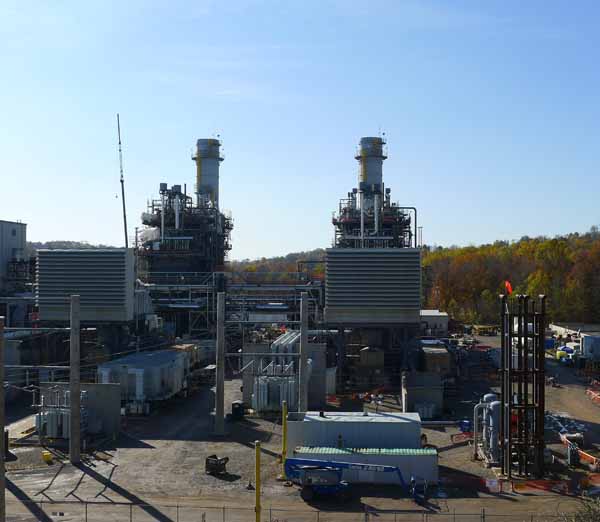 The plant provides 25 permanent jobs for the surrounding area. It will supply electricity to AEP’s Appalachian Power customers in West Virginia, Virginia, and Tennessee, and is expected to save ratepayers about $5 million a year by reducing the need for purchased power during periods of peak demand. AEP’s total costs for the plant were approximately $366 million.

AEP currently operates 39 GW of generating capacity in the U.S., with natural gas accounting for 24% of that. The Dresden plant figures to be an important element in AEP’s portfolio, as the company has announced plans to close a number of coal-fired plants over the next few years.