The electricity generation sector is facing several new rules from the U.S. Environmental Protection Agency (EPA) and a number of states. Most notably, the Cross-State Air Pollution Rule (CSAPR) and the Mercury and Air Toxics Standards (MATS) will require substantial reductions in emissions from fossil fuel–fired power plants, especially those that combust coal. Some utility companies are concerned that the rules could affect electricity system reliability, and much ink has been spilled over concerns that these rules will threaten the viability of the power generation industry. Based on Calpine’s experience, these concerns are largely unfounded, and resources exist in the near term that will allow the industry to comply with these new rules while still maintaining profitability. There are many key factors that ensure reliability despite retirements and maintenance outages for retrofits.

The reality is that the U.S. generation fleet is old, dirty, and in need of new investment, even without considering CSAPR and MATS. More than 40% of U.S. nonrenewable units are older than 35 years. There is approximately 170 GW of gas/oil generation capacity operating without existing or planned environmental upgrades or retrofits to reduce SO2 or NOX emissions and approximately 113 GW of coal-fired capacity without existing or planned scrubbers, a technology that has been used for decades to reduce emissions.

Many responsible coal generators already have invested, or have confirmed plans to invest, in environmental upgrades for compliance. To the extent that there are retirements and outages for upgrades to existing coal units, there is sufficient unused capacity at existing plants to ensure reliability is maintained.

The industry has long known hazardous air pollutants would be regulated under the Clean Air Act, as demonstrated by the substantial investment already made by responsible generators to upgrade units.

Of the units responding to the EPA’s MATS data collection request in 2010:

At least 33 coal-fired units are compliant with MATS emission limits already. Notably, 192 GW of U.S. coal-fueled capacity has scrubbers installed or under construction, with an additional approximately 24 GW of capacity having planned retrofits through 2015.

Finally, for generators that have chosen to delay investment so far, MATS allows three years to comply and an additional year if special circumstances warrant. In extreme circumstances a fifth year may be granted.

Gas Can Pick Up Any Slack

Natural gas capacity has rapidly expanded in the past 10 years due to competitive markets. Approximately 190 GW of combined cycle gas turbine capacity was added from 2000 to 2010. As seen in Figure 1, potential retired capacity can be replaced with excess, gas-fired combined cycle generation. 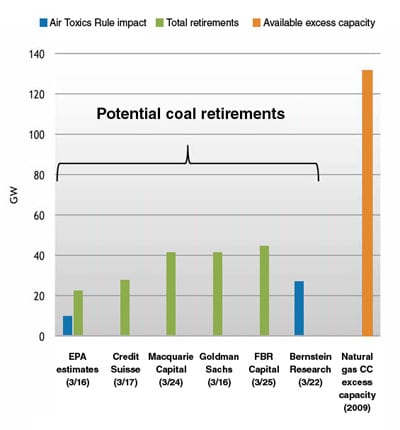 As can be seen in the table, this holds across the nation: Current reserve margins are healthy in all regions, with the possible exception of TRE. 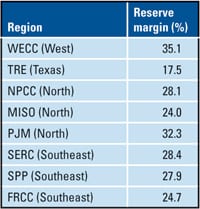 A shift toward gas-fired power is advantageous for other reasons. Gas-fired generation is less expensive to build than coal-fired plants. Natural gas prices are lower than coal’s; hence, power generated by gas is more affordable. The long-term outlook for natural gas prices is steady and low, so there will be added pressure on older, uncontrolled coal units. In fact, we are seeing significant coal-to-gas switching in several major electricity markets already, even though CSAPR implementation has been stayed by the court and MATS does not become effective until 2015.

The North American Electric Reliability Corp. (NERC), whose mission is to ensure the reliability of the North American bulk power system, agrees that the EPA’s air rules have an insignificant impact on reliability. Figure 2, taken from NERC’s 2011 Long-Term Reliability Assessment, indicates that incremental capacity reductions due to CSAPR and MATS will be less than 15 GW. 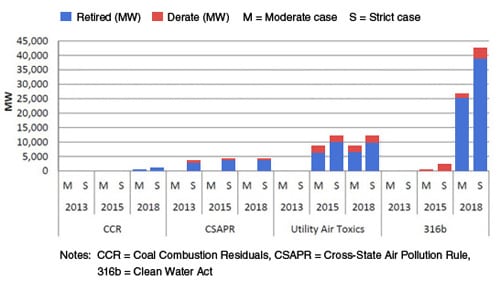 2. NERC estimates that incremental capacity reductions due to CSAPR and MATS will be less than 15 GW. Source: NERC

The electricity generation industry has never been in a better position to significantly reduce its emissions of air toxics and SO2 and NOx, which are precursors of ozone and fine particulate matter. There is significant underutilized modern, natural gas combined cycle generation that can shoulder the load while coal plants install needed emission controls or retire. Natural gas prices are low and stable, and there are substantial reserves of natural gas. The time is right for the U.S. to significantly modernize its generation fleet and improve air quality, while maintaining system reliability.

—Donald Neal is vice president-environmental health and safety at Calpine. This article is based on a presentation delivered at the EUEC 2012 conference.