The "combined" portion of a combined-cycle plant is the heat-recovery steam generator (HRSG) that generates high-pressure and high-temperature steam and the steam turbine generator that expands the steam to produce electricity. Integrating the HRSG and steam turbine with the combustion turbine is a key challenge for plant designers, as each system has differing operating profiles, operational constraints, and design requirements. The combustion turbine can rapidly start, yet the rate of heating the large mass of metal tubes in the HRSG limits the combustion turbine start-up ramp rate. Some plants have resorted to "temperature matching" distributed control system software routines that carefully manage the turbine exhaust gas temperature during start-up to protect HRSG tubes and components. Likewise, the temperature, pressure, and rate of HRSG steam production is often limited by the start-up ramp rate of the steam turbine.

Most commercial combined-cycle plants were designed and constructed for baseload service where rapid start-ups and shutdowns were infrequent. When natural gas prices rose, many of these plants were relegated to summer cycling service — some twice a day — followed by months of inactivity during the winter when demand for electricity eases. During the 1990s, the design and operating temperature requirements for desuperheaters used in HRSGs to condition the steam supplied to the steam turbine increased from below 900F to over 1,050F. In most cases, probe style desuperheaters (also called attemperators) were not designed to deal with these elevated steam temperatures, much less the added thermodynamic stresses that came with cycling service.

Component problems in the main and reheat steam systems were some of the first to experience potentially catastrophic operational problems in these high-temperature steam systems. The favored design approach for matching steam temperatures with those required by the steam turbine is to insert a desuperheater between primary and secondary superheater and reheater sections in the HRSG. When the desuperheater is not operating correctly, prolonged exposure to the higher-than-specified steam temperatures in the reheater and superheater can damage expensive equipment and lead to unsafe operating conditions for tubes and surrounding components. Not only are bent or cracked pipes extremely dangerous, but plants forced to shut down for costly repairs will lose electricity sale revenue and may be required to purchase expensive replacement power.

The desuperheater operates by injecting condensate into high-temperature steam to precisely match the steam temperatures required by the steam turbine. This temperature-matching function is most important during system start-up and shutdown to prevent large temperature gradients in the HRSG or steam turbine steam supply. When the desuperheater fails to temper the steam correctly, even a single large overspray excursion can damage steam turbine internals, cause costly tube leaks, and significantly reduce the steam turbine efficiency. Wet steam can also quench regions of the steam pipes, causing additional, long-term problems. Heavy desuperheater sprays during start-up can, over time, initiate cracking in HRSG tube joints or even distort the shape of tube banks. Prolonged operation outside the design-operating envelope will produce accelerated fatigue damage to the pressure parts.

Some plant designs have also incorporated a desuperheater after the secondary superheater pass to reduce heavy sprays by the first desuperheater and to trim the steam temperature prior to entering the steam turbine. These superheater and reheater attemperators are exposed to temperatures routinely over 1,000F and have exhibited seat leakage and nozzle cracking; in some cases they have even contributed to premature failure of the surrounding pipe.

Low-load operation is also problematic. A typical industrial combustion turbine’s exhaust temperature remains well above the design steam temperature even at low loads. Also, with lower gas flows, the heat transfer usually moves forward in the superheater section, where the exhaust gas first contacts heating surface. This design peculiarity means that heavy spraying of the superheated steam to maintain design steam conditions has on occasion allowed "wet" steam to enter the steam turbine. The same is true for the reheaters, assuming they are not designed to operate dry during start-up. Wet steam can enter the cold reheat lines of the HRSG, causing the same type of steam turbine problems.

A well-designed desuperheater will produce atomized water droplets that are completely vaporized before entering the superheater or reheater header and will produce an atomization pattern that completely fills the pipe to eliminate bypassing and formations of thermal gradients. Properly installed desuperheaters should also be installed in a straight section of piping with two to eight diameters upstream and 12 to 20 diameters downstream — not always possible in today’s very compact plant designs, but nevertheless, this remains a good design criteria.

Good operating practice is to closely monitor the desuperheater during those periods when sprays should be secured. Few desuperheaters are capable of full shutoff after a few years of service. ASME Section I of the boiler code provides guidelines for these and additional design requirements.

Tyco Flow Control has developed a new desuperheater valve for combined-cycle power plants that addresses each of these operating concerns, especially for plants when steam temperatures exceed 1,000F with excursions up to 1,150F. The first installation of the Yarway TempLow HT technology desuperheater recently completed a five-year run at Iberdrola’s Santurce Plant located in Vizcaya, Spain.

Tyco Flow Control recognized the challenge emerging in the marketplace as more and more plant managers expressed their frustration with standard construction desuperheaters failing above 1,000F and the costs and operating penalties that created for them. The company decided to take a step back to research a safe, cost-effective, and scalable solution. The company embarked on a three-year study with the goal of bringing a new product to market that could function successfully at 1,150F, and the risk paid off.

The design of the new desuperheater began with the assumption that it must continuously operate at steam temperatures above 1,000F. Tyco selected metallurgy for the probe, seating design, and water delivery system to work up to 1,150F. The device was also designed to fit into any combined-cycle plant as a new or retrofit solution. The valve also meets all U.S. and international codes, making it a truly international solution.

Tyco also maintains that, although other probe style desuperheaters require inspection and perhaps replacement every two years, the TempLow HT design will last for many more years. A recent inspection of an early installation in Spain after five years of service with no maintenance and zero leakage appears to confirm Tyco’s claims (see sidebar at the end of this story).

The 400-MW Santurce Plant is one of three Iberdrola combined-cycle plants placed in service in 2004 (see "Arcos de la Frontera Grupo III Combined-Cycle Plant, Cádiz, Spain" in the August 2006 issue of POWER). Santurce is a single-shaft combined-cycle plant based on a GE 9001FA combustion turbine, a three-pressure Kawasaki HRSG, and a GE steam turbine. The primary fuel is natural gas with a heavy fuel backup. The three-pressure HRSG mixes steam from the reheat with the intermediate-pressure (IP) steam, and the low-pressure (LP) steam turbine receives steam from the IP turbine plus the LP steam generating circuit. The high-pressure (HP) steam operates at 1,700 psig/1,094F; the IP section operates at 700F. The two Yarway desuperheaters are installed in both the cross-over between the HP superheater sections and in the cold reheat return line.

After five years of operation, the plant reports not one single leak, damaged probe, cracked nozzle, or pipe damage directly caused by operation of the desuperheater. Also, the desuperheater was able to sustain 1,150F steam temperatures without degradation. Avoiding unexpected outages to repair the desuperheater has paid good dividends to the plant given that each outage day penalizes the plant $200,000 to $250,000 in lost revenue.

According to Plant Director Pavel J.F. Rodriguez, the plant emissions-limited minimum load case for the plant is 230 MW. When operating between 230 MW and 280 MW, the outlet temperature of the combustion turbine is at its peak and attemperation in both the superheat and reheat lines is required. Above 280 MW to approximately 300 MW, attemperation may be required intermittently, although when is difficult to predict. Above 300 MW, the desuperheaters are in the closed position. The steam pipe connection on the superheat and reheat desuperheater is 4-inch with a 1&frac12;-inch water supply connection. The superheat steam line is an 18-inch OD pipe. The reheat steam line is 32-inch OD pipe.

Inspection of Both Desuperheaters after Five Years of Service

Step 1: Superheater desuperheater disassembly. The desuperheater installed during the superheater inspection began with removal of the actuator. Part of the main steam lagging also was removed for proper access to the lower nuts of the steam flange connection. Courtesy: Tyco Flow Control 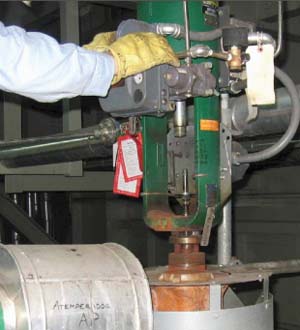 Step 2: Remove for inspection. Bolts from the steam flange were removed, and the unit was raised from its stub connection. A visual inspection did not reveal any cracks or imperfections. The flanged upper part of the spray cylinder was in perfect condition as well as the sealing indication of the RTJ groove. Courtesy: Tyco Flow Control

Step 3: Visual inspection. The splash pattern around the nozzles is typical of probe type spray units. Because the plant was standing idle for some days, oxidation of the magnetite had occurred. Some small scratches showed up on the cylindrical part of the spray cylinder, and visual inspection led to the conclusion that these were most likely mechanical fissures. A nondestructive examination (NDE) test would confirm that observation. Courtesy: Tyco Flow Control 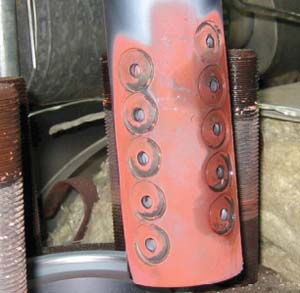 Step 4: NDE test. Next, a dye penetrant NDE test was performed on the entire assembly. The investigation showed that zero cracks or imperfections were present in the spray cylinder, the flange area, and the nozzle area. Courtesy: Tyco Flow Control 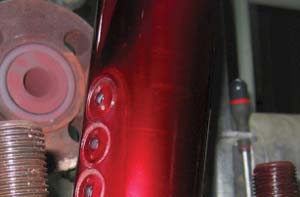 Step 5: Return to service. Plant management decided to reinstall the unit with no further dismantling or testing. Plant records showed excellent temperature control and smooth responsiveness over the entire operating range since start-up, five years earlier. The offset from setpoint was never more than 4C on a controller over a 600C span. All operating and mechanical inspection results showed that a complete overhaul was not required. The desuperheater was then reinstalled and returned to service. Courtesy: Tyco Flow Control 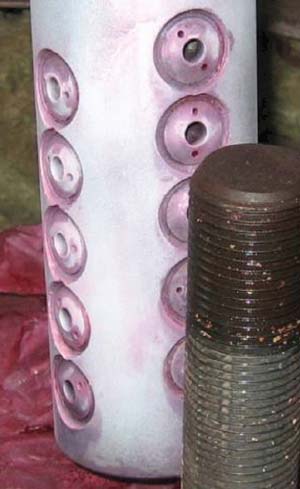 Step 6: Reheat desuperheater disassembly. There was much more access to the reheat desuperheater given the larger size of its pipe—32-inch outer diameter (OD)—than the superheat pipe (18-inch OD). The liquid on the bolting is WD-40 used as a rust solvent. Courtesy: Tyco Flow Control 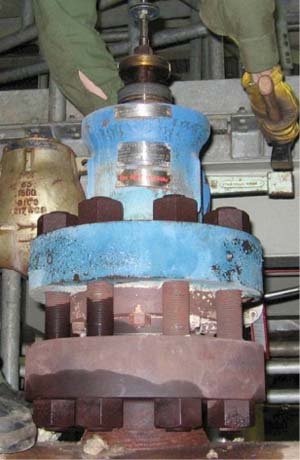 Step 7: Remove for inspection. The spray cylinder shows considerably more corrosion than the superheat unit because the unit is fabricated from a ferritic steel that is prone to oxidation. The superheat unit is constructed from F91. Courtesy: Tyco Flow Control 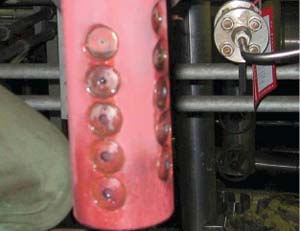 Step 10: Return to service. Again, all operating and mechanical inspection results showed that a complete overhaul was not required. The desuperheater was then reinstalled and returned to service. Courtesy: Tyco Flow Control