A three-year demonstration of the TOXECON process, a technology to reduce mercury emissions while increasing the collection efficiency of particulate matter (PM), was last year successfully completed at a Michigan coal power plant, the U.S. Department of Energy’s National Energy Technology Laboratory (NETL) reported in January.

NETL teamed up with We Energies and the Electric Power Research Institute (EPRI) for the $52.9 million demonstration project at We Energies’ Presque Isle Power Plant in Marquette, Mich. TOXECON, which resulted from NETL research and was patented by EPRI, essentially involves the injection of activated carbon and sodium-based sorbents into a pulsed-jet baghouse installed downstream of a plant’s PM control device, which in this application was a "hot-side" electrostatic precipitator (Figure 4). 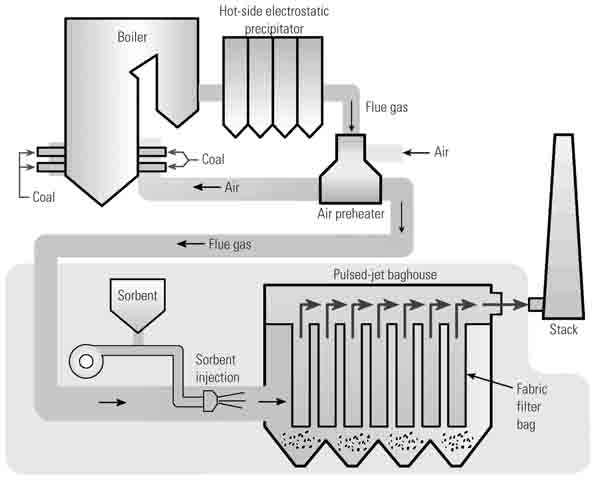 4.    The quicksilver plunge. TOXECON, a technology that resulted from National Energy Technology Laboratory (NETL) research and was patented by the Electric Power Research Institute, seeks to significantly reduce mercury emissions from coal-fired plants, make particulate matter collection easier, and maximize the use of coal combustion products. A three-year demonstration of the technology was recently successfully concluded at WE Energies’ Michigan Presque Isle Power Plant. Essentially, it involves collecting sorbents in the baghouse, along with the small amount of fly ash that escapes the primary particulate control. According to NETL, the baghouse provides excellent contact between gas and sorbent, which results in high mercury-removal efficiency, because the flue gas must pass through the dust cake of ash and sorbent on the bags in the baghouse. This configuration segregates the ash collected in the primary particulate control device (the precipitator) from the baghouse ash/sorbent mixture, enabling the ash collected in the primary particulate control device to continue to be sold for use in making concrete. Courtesy: WE Energies

The primary PM control device removes the bulk of the PM. The TOXECON process is placed downstream of the air preheater to operate at relatively cool temperatures conducive to mercury and other pollutant absorption. Activated carbon and sodium-based sorbents are injected into the ductwork upstream of the pulsed-jet baghouse, where they mix and absorb pollutants in the flue gas. Upon entering the pulsed-jet baghouse, in-flight pollutant absorption continues and is significantly enhanced by fixed-bed absorption as pollutants pass through a sorbent filter cake that forms on the fabric filter bags in the baghouse. Sorbent captured in the baghouse is processed to recover up to 90% of the mercury to enable 100% fly ash utilization.

NETL claims that during the demonstration period, TOXECON removed more than 90% of the mercury contained in the flue gas from three 90-MW units firing subbituminous Powder River Basin coal. Annually, the process is expected to capture some 97 pounds of mercury and 250 tons of particulate matter at the plant. The results show promise for a technology that is expected to provide a way for the coal power industry — particularly users of western subbituminous coal and especially in units that use a "hot-side" electrostatic precipitator located upstream of the power plant’s preheater — to achieve timely compliance with future mercury regulations. NETL says the process has application to an estimated 167 GW of existing coal-fired capacity.