Reducing mercury emissions at coal-fired power plants by 90% has been considered the holy grail of mercury control. A new technique promises to get us there — at a price.

For at least a decade, the electric utility industry has argued that reducing airborne mercury emissions from coal-fired power plants to the 90% level that environmentalists and many regulators have advocated is technically impossible. That may be about to change, according to presentations in the "Hg Technologies" sessions at the ELECTRIC POWER conference in Chicago this May. Much greater mercury capture than the 30% to 50% now available may be on the horizon for both eastern bituminous and Powder River Basin coal.

According to Sam Kumar, manager of Babcock & Wilcox’s (B&W’s) particulate control group, the 90% "holy grail" of mercury control is in sight. But attaining that 90% goal is going to be difficult, complicated, and costly. And capturing mercury before it gets into the air may, if not managed very carefully, degrade a plant’s particulate control systems. Kumar was lead author on a B&W paper presented at the conference. 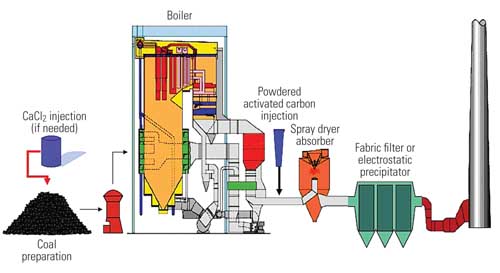 The trick, Kumar said, is to "capture the mercury as a particulate on the carbon and then capture the particulate" in the plant’s particulate control system, typically an electrostatic precipitator (ESP) or, less often, a fabric filter bag house. In some cases, Kumar noted, plants may require both an ESP and a bag house to achieve the 90% removal standard. That will add considerable capital dollars to the whole Hg removal operation.

Getting the mercury job done, Kumar said, will require tailoring the chemical streams to the plant characteristics and its coal (see table). In the case of ESPs, he said, the additional particulate load from activated carbon injection can overwhelm the ESP, increasing particulate emissions and altering stack plume opacity. "This puts a premium on ESP maintenance," he said, noting that potentiality simply increases the need for best practices when it comes to ESP maintenance. That’s not a problem with bag houses, but they exist on few of today’s coal-fired plants. Adding them would mean major capital expenses, noted Kumar. 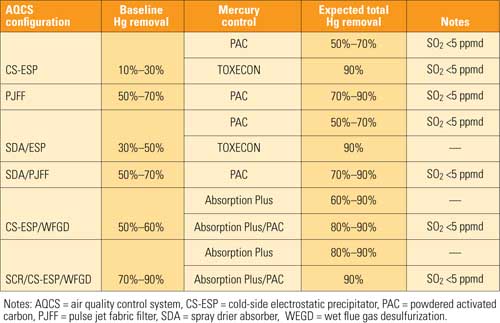 Among the considerations in the Hg reduction game, Kumar said, are where to locate the carbon injection and alkaline (trona or calcium carbonate) injection. In some cases, he noted, it may make sense to put activated carbon injection downstream from the ESP. Doing so preserves the quality of the fly ash, which is useful in the manufacture of concrete, providing a CO2 reduction benefit.

An ESP uses electro-physics to capture particulates and involves a balance of spaces and electrical charges to tune the machine, whereas a bag house presents a classic physical barrier. The injection of sorbents may upset the ESP parameters, but a bag house downstream from the ESP essentially shuts the door to particulates, although it is an expensive option.

The bottom line, said Kumar, is that "considerable progress has been made to increase mercury reduction performance" by activated carbon injection "and other sorbent advancements." The "holy grail" of mercury reduction may be within the grasp of coal plant operators.