The gestation period from concept to in-service for a new natural gas pipeline can take at least three to four years. A significant number of these projects are underway today in the Northeast U.S. in response to dramatic increases in local production.

I have previously written about the dramatic changes in strategies, infrastructure and operations in the Northeast resulting from the successful development and growth of Marcellus natural gas production. Some of these investments by pipelines, and shipper commitments for transportation agreements, are quite sizable and can cause a high degree of angst. One of the factors that makes this so difficult for everyone is that the timeline for an interstate pipeline to place new capacity into service can typically take three to four years from conception to in-service. That’s a long time in a dynamic industry and as we have seen, significant changes can take place in that long a period. Before we drill down to the strategic and operational aspects, it would be helpful to understand why it takes so long and what is involved in the development process to bring new pipeline capacity on stream.

First, the need for capacity must be recognized and potential shippers identified. Historically (when supplies were more distant, i.e. U.S. Gulf Coast or Rockies), gas buyers, primarily local distribution companies (LDCs) held pipeline capacity to secure their access to gas supplies. The capacity path usually began in the production area or a downstream hub location where gas can be bought or sold on a regular basis (known as a “liquid” pricing point). Nowadays the growth of production and an oversupplied market in the Northeast have driven gas producers to secure access to pipeline capacity enabling them to reach liquid points and city gates (interconnects with LDCs). In other words, producers are signing up for capacity that ties into capacity held by buyers. Securing access to capacity paths held by buyers allows producers to enhance their marketing capability. This was the case with Rockies Express (REX) pipeline and Rockies producers, and it is certainly the case in several of the more recent projects in the Marcellus.

Here’s where some of that pain comes in. Producers can’t commit to a pipeline too early in its development process because they may not know how much gas will be produced or where to sell it to get the best price. Once confidence is built that the gas will be there, the producer must evaluate alternatives for transportation and potential customers to be able to produce and flow the gas on an ongoing and reliable basis. The wells can start producing before the pipeline capacity is built; so alternate, less optimum outlets must be managed until the pipeline is in service.

At the other end of the pipe, the gas buyers have to make the decision as to where they want to buy their gas supplies. They typically like to control the path to their market area so they can buy from a larger number of suppliers and promote competition. They prefer to secure transportation back to a liquid point. The decision as to who will commit to the capacity and the required demand charges paid to the pipeline to reserve the pipeline capacity becomes a poker game between buyers and sellers. The pipelines can’t go forward without commitments since they need to demonstrate to regulators that the capacity is truly needed. The pipelines also go out on a limb and feel some pain because in most cases they bear the risk of development costs and ultimately building the project in a cost efficient and timely manner. This takes some sorting out. So how does all this come together and result in usable infrastructure? This development process in a regulated industry takes a lot of time, hard work and poses risks for all parties. Let’s look at this process. The chart below (Figure 1) is a very simplified depiction of the pipeline development steps and there are many subsets of tasks, some of which will be discussed below. 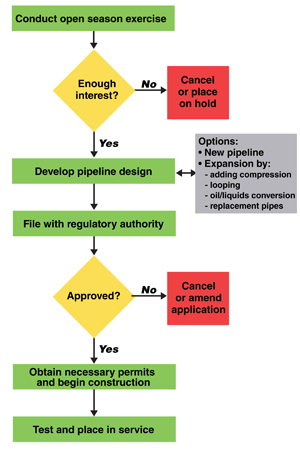 1. Getting to the construction stage of a pipeline project involves a long series of careful decision-making. Source: EIA

Most projects are initiated by pipeline developers based on analysis of the changes in the macro environment and understanding current and future bottlenecks based on anticipated gas flows and through regular discussions with prospective shippers. In most cases expansion of existing pipeline systems is the preferred method because it is efficient and more economic than greenfield construction. But this is not always the case. The developer will analyze rough project scopes, costs, and rates to test the general feasibility of the project with prospective shippers. This is sometimes done with minimal fieldwork using desktop surveying of possible routes. Assuming this clears the sniff test with the market, more in-depth work will be done before it is considered a project that can go public. This could take a number of months.

In the regulated world of gas pipelines, the pipeline companies must be careful to not discriminate against any potential shipper, and a high degree of transparency begins with the posting of an “Open Season.” This is a public document that informs the world that the project has been proposed and solicits interested parties to participate. The document provides critical information about the project including path, size, estimated rates, timing and definition of how capacity will be awarded in the process. The open season can be binding or non-binding. If it is binding, the participation is documented in the form of a precedent agreement (PA) between the shipper and the pipeline. This agreement obligates the shipper to execute a transportation agreement in the future prior to commencement of service. The executed PA is very important to demonstrate to the regulators, primarily the Federal Energy Regulatory Commission (FERC) that the capacity will be used and useful and thus in the public need and necessity. This determination by FERC is critical in granting rights to the pipeline as specified in the Natural Gas Act. The PAs will be included in the FERC Application that the pipeline will file seeking permission to build and operate the facilities. The project definition including some fieldwork, open season, and negotiation of PAs could easily take six months. In a non-binding open season, the pipeline solicits expressions of interest, which usually delays the process and adds iterations to the definition of project scope.

Based on the results of the open season, and with agreements in hand to finalize the scope of the project, the pipeline will expand the design detail laying out in a more precise manner the location of facilities, mix between pipeline and compression facilities, and a much more detailed definition of costs. They will also commence the environmental analysis critical for the FERC application. Now we are talking about serious commitment of funding. Of significance, contact begins with elected federal, state, county and local officials in the jurisdiction of the facilities; other regulatory and permitting agencies; non-government organizations (NGOs); and of course the landowners and neighboring landowners affected by the project. Permission for access to do surveys is sought and discussion of landowner rights in the pipeline development process takes place.

All this leads up to the preparation of the FERC application, which usually contains multiple binders for a major project. Depending on the size of the project, the preparation of the FERC application, including all the environmental analysis, detailed routing and drawings and other supporting information, usually takes six to 12 months. There are certain environmental surveys such as endangered species studies that can only be done during certain times of the year so planning must be done to provide for this and to avoid delays to the following year. The filing is a major milestone in the project with a lot of resources committed to that point, but this only starts the process with FERC.

The regulatory review of the application for major projects is usually in the 12 to 18 month range and smaller projects could be reviewed in six to 12 months. During this period public meetings are held on a regional basis in the communities through which the pipeline will pass and FERC participates in those meetings. All interested parties have the opportunity to intervene and provide comments on the record and either support or raise issues they may have with the plans. The pipeline usually responds to the more serious ones to make sure there is no misunderstanding on the record.

Show Me the Money

In a perfect world, and more so in the “old days,” the pipeline would wait to gain approval for the project before making more financial commitments. To keep the project timeline reasonable, it has become more commonplace to acquire long lead time materials or at least manufacturing slots at pipe mills or compressor manufacturers’ plants prior to obtaining approvals. They do this with no certainty that the project will be approved, or approved with conditions it is willing to accept. During this period, discussions with the supporting permitting agencies take place. These cover items such as river/stream crossings, road crossings, air permits, use of staging areas etc. that are necessary for construction to take place. FERC issues its certificate for the project subject to the developer obtaining all these other permits before construction can begin.

Once the permits are in place, construction can begin. As in the environmental survey, it is pretty typical for some restrictions to specific times of the year based on wildlife precautions, especially for spawning cycles in river crossings and nesting periods for certain endangered species known to be present in the path. This could affect the overall project schedule, depending on what time of year the FERC certificate is issued. In the North construction is typically done during the seven-month period between April and November due to the risks associated with snow and ice that can escalate costs significantly for a number of reasons, and safety issues. Larger projects are often constructed over two seasons for that reason. This is a major variable depending on the timing of the FERC certificate. Compressing the construction into one season is sometimes possible but could escalate costs beyond those included in the filing.

FERC monitors the construction from an environmental standpoint and the facilities cannot be placed in service unless FERC is satisfied that conditions have been met. All facilities are inspected to make sure they satisfy regulations. After in-service, follow-up remediation with landowners, cleanup and compressor noise testing is done.

This is a long, costly and painful process. Regulation ensures that the interests of various stakeholders are met.

As we have seen, the natural gas pipeline gestation period from concept to in-service can easily take three to four years, which is more than enough time for market conditions to change—potentially adversely. Projects require a lot of planning, negotiating and regulatory sophistication to complete. In future postings in this series we will examine pipeline projects that have recently been developed and put into service as well as those under construction and still in the development process.

—Bob Bookstaber is president of Bookstaber & Associates. This post originally appeared on the RBN Energy blog. Minor style edits have been made for this publication.