With the downward pressures on natural gas prices around the world, and inflation-adjusted record lows in the U.S., gas is regaining popularity as a fuel source for mobile power generation. And with the added focus is coming some notable advances in technology.

Tempe, Ariz.,–based Clear Energy Systems (CES) is about to launch a 1-MW mobile power system, the Genesis 1000, that is one-third the size and one-fifth the weight of typical diesel-fueled 1-MW systems—small and light enough to tow behind a pickup truck (Figure 1).

1. The 1-MW Genesis 1000 is substantially smaller than comparable options, which are typically mounted on full-sized trailers. Courtesy: CES

The advance that gives the Genesis 1000 such a small footprint is the ARC930T engine. Unlike V- or inline-configuration engines, the ARC930T is a radial design. The nine-cylinder block is only 62 inches across and 31 inches long. Radial engines were long favored for aviation use in the pre-jet era because of their simplicity, higher power-to-weight ratio, and ability to use air cooling. However, their geometry made them less suited for use on the ground, and they have largely fallen out of favor since their zenith during World War II.

According to CES, the radial geometry of the ARC930T permits a smaller crankcase and simpler, more mechanically efficient crankshaft with fewer parts and bearings, reduced contact surfaces, and lower coefficient of friction. The crankshaft, being extremely short and sturdy compared to longer inline- and V-configuration engines, experiences far less friction and torsional distortion (Figure 2). 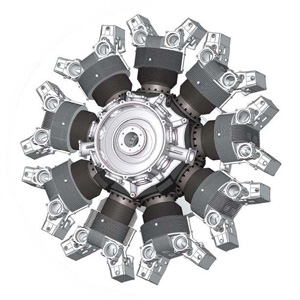 2. Like all radial designs, the ARC930T has a simpler, less-complicated geometry that should make it more efficient and durable than comparable inline- and V-configuration engines. Courtesy: CES

All this makes for a lighter, simpler, more efficient prime mover for the Genesis 1000 system. The trailer-mounted generator is only 14 feet long and weighs about 15,000 pounds in open-skid configuration, and about 15 feet and 16,000 pounds in enclosed configuration.

Steve Bray, president of Power Plus, a California-based energy solutions company said, “The combination of small size and weight, fully enclosed trailer mobility, and massive generating power means that this technology will transform how energy managers plan for or deploy distributed generation assets.”

The ARC930T is intended to run on natural gas, but it can also run on biogas, flare gas, and landfill gas, as well as propane and butane. (An ethanol-fueled version is also in the works.) This makes it ideal for use in remote oil and gas development.

"We believe the size, weight, fuel agility, and operating cost of the Genesis 1000 will be a game-changer in distributed power generation,” said Carmen. “The system brings together so many winning features, particularly for developing offshore energy markets."

The Genesis 1000 system is delivered as a fully contained, ready-to-run system. Its three-phase synchronous generator is capable of outputting all standard worldwide voltages at 50 Hz and 60 Hz: 220-V 3-phase, 277-V 3-phase, 480-V 3-phase, 477-V 3-phase, and higher. In addition, its use of natural gas means substantially lower emissions compared to diesel generators, and the system meets all Environmental Protection Agency, California Air Resources Board, and European Commission emissions regulations for spark-ignited engines. At full power, it consumes about 8.5 MMBtu/hr.

“These units are indispensable for oil and gas exploration and resource development, especially in remote areas,” said Greg Reid, president of GasGen Canada. “This product is logistically and economically feasible to generate electricity in remote regions where oil and gas are located.”

CES expects the Genesis 1000 to be ready for delivery in the U.S., Canada, and Europe in the first quarter of 2013.