[UPDATE: An earlier version of this story contained some incorrect information about the PUCT’s decisions on wholesale electricity price caps in Texas. The article has been corrected below.]

Reserve margins in the Electric Reliability Council of Texas (ERCOT) region have been a concern for several years. In the summer of 2011, faced with record-breaking temperatures, ERCOT was forced to bring two mothballed plants online to maintain reliability. Though reserve margins this summer were not as tight, long-term projections still warn of trouble—ERCOT said in May that margins could reach negative levels by 2022, depending on the pace of impending retirements, primarily in coal-fired generation.

Thus, the announcement this fall that Dallas-based Panda Power Funds would build two advanced combined cycle plants, one in Temple (about an hour northeast of Austin) and one in Sherman (about an hour north of Dallas), came as a welcome development to state power officials (Figure 1).

Bechtel and Siemens will develop the identical turnkey projects, based on Siemens’ new Flex-Plant 30 design, which it has rolled out at two sites in California—one in Lodi (honored as a gas-fired Top Plant in the September issue of POWER) and one in El Segundo. Bechtel will be responsible for the engineering and construction of the facility, while Siemens will provide the power-island package.

Each will have an installed capacity of 758 MW. The multi-shaft plants will employ two Siemens SGT6-5000F gas turbines and one SST6-5000 steam turbine. Siemens will also supply the generators, instrumentation, and control system. NEM USA will supply two Benson heavy duct-fired heat recovery steam generators for each plant.

The gas turbines, steam turbines, and generators will be manufactured in the Siemens factory in Charlotte, North Carolina, which is the main production facility for Siemens 60 Hz power generation equipment. Siemens has also signed a long-term service agreement for the plants.

The two plants "will be [some] of the most efficient natural gas–fueled power plants in the United States," said Jeff Brightman, president of Bechtel’s fossil power business. They will also be among the cleanest: Emissions are projected to be less than 10 ppm CO and less than 2 ppm NOx.

The Temple plant broke ground on Sept. 6. Financing for the Sherman plant was completed on Sept. 18, and groundbreaking is scheduled for Nov 8. Both plants are projected to come online in 2014. Total costs are estimated at around $750 million apiece.

The gas turbines for this project will be equipped with Siemens’ “Shaping Power” feature, which enables faster ramping without negatively affecting turbine life expectancy (Figure 2). The design combines a larger compressor with the flexibility offered by multiple rows of variable compressor airfoils, thus extending the operating range of the turbine. From the optimized baseload design point, the engine can quickly ramp down by closing the variable airfoils and quickly ramp up by using the additional mass flow through the oversized compressor. 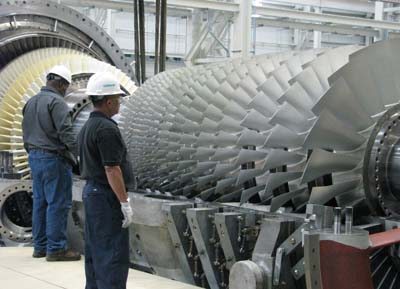 2. Siemens SGT6-5000F turbines, equipped with the “Shaping Power” feature, will form the heart of the two Texas plants. The turbines will be manufactured in Siemens’ Charlotte, N.C., facility, shown here. Courtesy: Siemens

According to Roland Fischer, CEO of fossil power generation at Siemens Energy, the Siemens Flex-Plant technology was specifically designed for regions like ERCOT with large amounts of renewable power in the grid. The design incorporates two key advantages.

First, the oversized compressor adds generation in excess of the baseload power, even when ambient temperatures are high. Second, significant amounts of power can be quickly and predictably ramped up and down when renewable generating sources are cycling. The response time is enhanced because the bottoming cycle is already warm and the steam turbine will automatically follow the gas turbine. The result is a quick-responding gas turbine that then produces a fast-responding combined cycle. The Panda plants will be able to generate power within 10 minutes of startup and reach full combined cycle output within an hour.

Both plants have been in development for several years. Despite the dire need for new capacity in ERCOT, they were initially a tough sell to investors. "It has been an uphill battle, in a very difficult financial market, to get this project off the drawing board and out of the ground," said Todd W. Carter, Panda president and senior partner. "The financing market that was tough as nails two months ago is starting to show signs of movement in our direction. While it was still a long, hard march to closing, calls were coming in to us from many different quarters to be a part of this project."

Panda and its investor partners are providing equity in both projects, while Goldman Sachs and Credit Suisse arranged the senior debt financing. According to Panda, the two loans mark the only time in six years that a greenfield power plant project has been financed with term loans.

ERCOT and the Public Utility Commission of Texas (PUCT) have been struggling for several years to find ways to better incentivize new capacity. Because ERCOT is an "energy-only" market, electricity prices alone are relied upon to spur construction of new capacity. Wholesale prices were capped at $3,000/MWh until August, when the cap was raised to $4,500/MWh. On Oct. 25, the PUCT voted to raise prices even further over the next few years, to $5,000/MWh in 2013, $7,000/MWh in 2014, and $9,000/MWh in 2015.

Other changes are being considered, as it has become clear that the current structure, largely designed before the recent tight reserve margins developed, may not be optimal for present conditions.