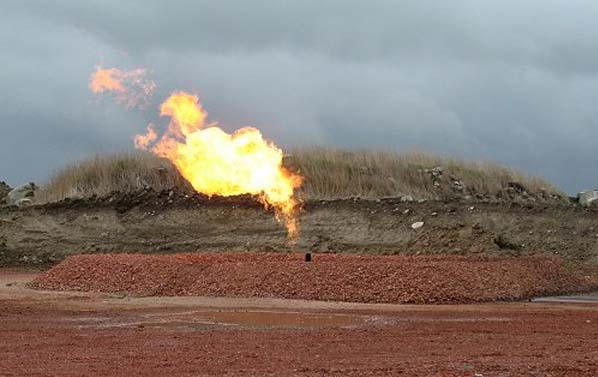 Not surprisingly, given accelerated extraction at shale plays, gas flaring is growing faster in the U.S. than in any other country, according to at least one report. Flaring, the practice of burning natural gas that can’t be stored or delivered to market, which discharges the CO2 to atmosphere, is like burning money through a smoke stack. However, it is an unavoidable consequence of three factors:

Flares are major point sources for emissions, not just of CO2 but also of SO2, NOx, CO, and other byproducts of incomplete combustion. Consequently, they are drawing scrutiny from regulators and activists opposed to fossil fuel extraction and consumption. Unless the industry stays ahead of public opinion, flaring could become another roadblock to fully capitalizing on this domestic resource.

In Texas, as Reuters reported this summer, permits for flaring have increased five-fold since 2008 and almost doubled between 2010 and 2012. Gas flaring has soared by 1,200% since 2004 in North Dakota.

Federal regulators have taken notice. House Representative Henry Waxman and others have been urging the House Committee on Energy and Commerce to schedule a hearing on gas flaring practices since October 2011. Their letter, sent to Chairman Fred Upton in May of this year, cites a recent World Bank report stating that increased flaring in the U.S. has caused worldwide flaring to rise; it had been steadily declining, dropping 20% since 2005. The U.S. now ranks among the top 10 worst offenders, along with countries like Russia, Nigeria, and Iraq.

Being ranked with such company certainly has sensational value with respect to public opinion.

The Environmental Protection Agency (EPA) recently finalized rules requiring shale gas fracking sites to capture emissions, including fugitive gas emissions, but claims it lacks the data to establish rules for gas co-produced at oil sites. The rules do not go into effect until 2014. Information on the new rules at the EPA website suggests that flaring activity will decline after 2015 because the primary method of compliance will be reducing methane emissions through “green completions,” also called “reduced emissions completions.” This refers to “separating gas and liquid hydrocarbons from the flowback that comes from the well as it is being prepared for production.” The EPA believes revenue from gas sales will more than offset any cost for compliance with the rules.

Meanwhile, state regulators are struggling to balance economic development and environmental management goals. Thus far, economic development appears to be winning. North Dakota allows producers to flare at an oil well for at least a year. Pennsylvania’s laws address water quality and quality of life issues (such as noise and earth movement) but not flaring, and it has only recently begun a comprehensive one-year evaluation of shale extraction for regulatory purposes. In May, it was widely reported that the Texas Railroad Commission, which regulates gas extraction, announced plans to study whether flaring and venting practices in the Eagle Ford need to be updated. The commission created the Eagle Ford Task Force for this and other purposes.

Flaring operations jeopardize other environmental restrictions. For example, one of the Eagle Ford Task Force’s great concerns is whether flaring will push the San Antonio metro area over its ozone limits. Producing areas near other large urban centers should be similarly concerned.

Much of the problem appears to be that shale gas extraction fracking is being conducted by many small companies in an industry that is diffuse and fragmented. As has been exhibited so often in the past, it is far easier to regulate a small number of large entities (as in the case of electric utilities) than a large number of small entities (such as automobile owners).

Flaring is in all likelihood a temporary problem. No one benefits when money goes up the stack. The problem is in fact an opportunity for industry to sell gas purification (sulfur and water removal), capture, compression, and delivery equipment. Where large quantities are flared, the gas will likely be destined for a pipeline. When quantities are small, engine and turbine generators can recover the fuel as electricity for use on-site or for delivery to the electricity grid, similar to how fugitive methane issues have been resolved at landfills and water treatment plants. A report issued by GE Energy in October 2010, “Flare Gas Reduction: Recent Global Trends and Policy Considerations”, provides an excellent review of the global problem and myriad solutions available to keep that money out of the air.