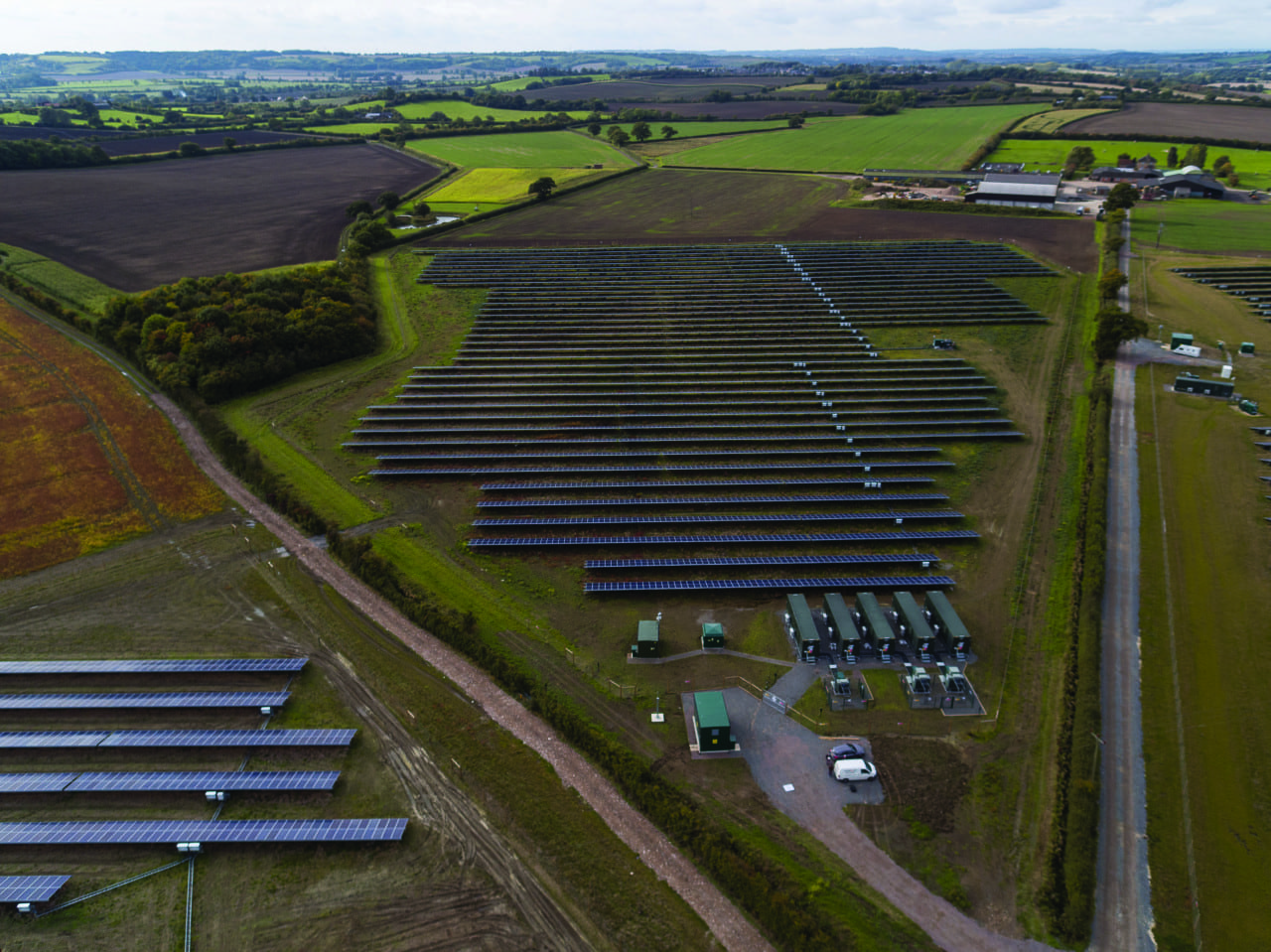 The 45-acre Clayhill solar farm and energy storage facility near Flitwick in Bedfordshire, UK, does not appear particularly impressive upon first glance, but a little digging will reveal what makes this solar farm remarkable—it is the UK’s first solar farm built without government subsidies.

On September 26, 2017, UK Climate Change Minister Claire Perry marched across a slightly muddy field to a 10-MW solar farm built by British renewable energy developer Anesco. The high-profile visit included a tour of the solar farm (Figure 1), which includes some interesting design elements, but the true pull for Perry was not what was included in the plant, it was what was not included—government subsidies.

As the UK government signals a desire to end subsidies for solar power, the industry is in a scary place. The training wheels are off. However, with the opening of the Clayhill Solar Farm, the industry can breathe a little easier knowing that it can be done.

“We are really starting to deliver now what we really wanted, which is a low-carbon economy that is not about hunkering down and low growth and a sort of dark future,” Perry said at Clayhill. “It’s about green growth and new opportunities, new technologies, new job creation, and a really hopeful future. It’s happening right here in this slightly clay field of Bedfordshire.”

According to Anesco, the solar farm will generate enough electricity for about 2,500 homes and save 4,452 tonnes of carbon. The project also includes five battery storage units, which will help provide grid-balancing services to National Grid. 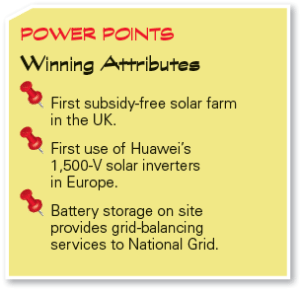 Anesco in part attributes its ability to build a subsidy-free solar farm to the use of 135 Huawei 1,500-V string inverters. In the plant’s second notable “first,” these inverters have never been previously installed in Europe.

“By finding a way to build a 1,500-V string inverter system, Anesco has been able to build solar without subsidy and this design is a major step change for the industry,” according to a company factsheet on the project.

Using more powerful inverters allowed the developers to use longer panel arrays, which in turn resulted in a 35% cost reduction when compared with a standard solar park, Anesco said. According to the company the inverters significantly improve power yields with a high EU efficiency of 98.8%, as well as a low failure rate.

“For the solar industry, Clayhill is a landmark development and paves the way for a sustainable future, where subsidies are no longer needed or relied upon. Importantly, it proves that the Government’s decision to withdraw subsidies doesn’t have to signal the end of solar as a commercially viable technology,” Steve Shine, Anesco’s executive chairman, said in a press release.

The solar farm consists of 31,240 solar panels—supplied by BYD—installed on 15,620 meters of frames. The project was installed in 12 weeks and includes five energy storage units totaling 6 MW. The batteries were also supplied by BYD and Hill & Smith Solar supplied the PV mounting frames.

“You may not know the amount of supply chain engineering that has gone into this production thanks to Steve and his team really sitting down with the supply chain and saying, ‘How do we build this? How do we make this better? … How do we actually organize this to use the highest capacity inverters in this system so we can actually measure and monitor very effectively?’ ” Perry said. “It’s that level of ingenuity and creativity that I also wanted to celebrate today.”

It is also worth noting that the Clayhill Solar Farm is located next to an existing solar project, which means that much of the necessary infrastructure was already in place, further cutting costs.

The inclusion of batteries was also crucial to ensuring that the project could be completed without subsidy. Through a program with National Grid, Anesco will be paid to help ensure the stability of the grid.

“Battery technology also has an important role to play in making renewable energy a viable part of the UK’s energy network by ensuring energy can be captured and stored for use when needed,” the UK Department for Business, Energy and Industrial Strategy (BEIS) has noted.

Solar Subsidies in the UK

The writing has been on the wall for some time that solar subsidies are coming to an end in the UK, and that message is only getting clearer. The nation’s recently released Clean Growth Strategy states: “We want to see more people investing in solar without government support and are currently considering options for our approach to small scale low carbon generation beyond 2019, and will provide an update later this year.”

The document also notes that photovoltaic modules are almost 80% cheaper now than in 2010, suggesting that the industry is ready to stand on its own. The Clean Growth Strategy particularly calls out Clayhill for its status as the first subsidy-free solar farm, proposing that the Clayhill model could be replicated by future projects.

“Co-locating storage at new renewable sites, combined with significant reductions in generation and storage technology costs, may allow more subsidy free sites to be built—providing services that help to maintain the reliability of the grid and clean electricity at low cost,” the document says.

Indeed, according to BEIS, the government expects more solar developers to follow in the footsteps of Anesco and its Clayhill Solar Farm. ■