Pairing solar energy resources with batteries is a winning solution. It allows utilities to store excess power when the sun is shining but demand is low, and use it when the sun sets but demand is high. One innovative project on the island of Kaua‘i is doing that and more, tapping into several other benefits in the process.

Legislative policies, such as renewable portfolio standards (RPSs), can play an integral role in state efforts to diversify the energy mix, promote economic development, and reduce emissions. At the end of 2018, 29 states and the District of Columbia had RPS policies that required electricity suppliers to supply a share of their electricity from designated renewable resources or eligible technologies. Additionally, eight states had non-binding renewable portfolio goals.

Hawai‘i has one of the most aggressive policies. The state established its first RPS in 2001. Its current standard requires electric utilities in Hawai‘i to generate at least 30% of electricity from renewable sources by 2020 and 100% by 2045. In a report submitted to the 2019 legislature, the Hawai‘i Public Utilities Commission said the Kaua‘i Island Utility Cooperative (KIUC) had already achieved the 2020 RPS requirement, and Hawaiian Electric Co., Maui Electric Co., and Hawai‘i Electric Light Co. were “highly likely” to achieve the target. 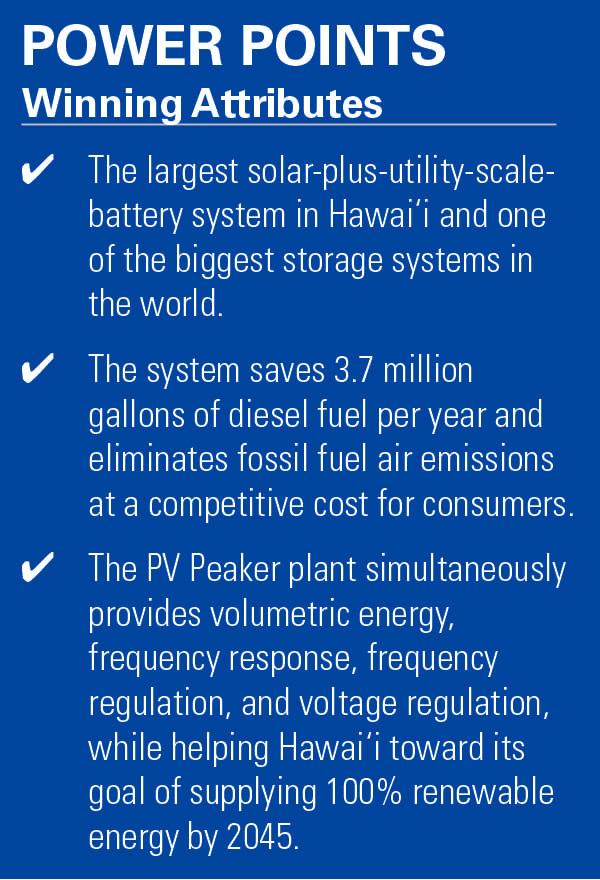 Furthermore, the report says, “The costs of renewable energy projects under development and recently proposed in Hawai‘i are below recent costs of most fossil fuel generation, making renewable projects cost-competitive alternatives compared to continuing to utilize fossil fuel generation resources.” However, the authors also noted that reliability events in 2017 and 2018 that occurred on Kaua‘i and Maui—islands with high levels of inverter-based renewable generation—suggest that continued research and development of grid integration technologies and grid management solutions will be necessary for reliable operation of the grid as the state progresses toward longer-term RPS goals.

One solution that has proven to be a winner is pairing solar installations with battery storage. In January, AES Distributed Energy, a subsidiary of The AES Corp., and KIUC blessed the completion of the Lawa‘i Solar and Energy Storage facility on Kaua‘i’s south shore. The facility consists of a 28-MW solar photovoltaic (PV) and a 100-MWh five-hour duration energy storage system. The new “PV Peaker” is expected to deliver roughly 11% of Kaua‘i’s power, making the island more than 50% powered by renewables.

“Now that the Lawa‘i project is on line, as much as 40 percent of our evening peak power will be supplied by stored solar energy,” David Bissell, KIUC’s president and CEO, said in a statement released in conjunction with the ceremony. “We are proud to partner with AES on innovative projects that are paving the way toward a clean energy future,” he said.

The system is located on 155 acres of former sugar land between Lawa‘i and Koloa. When commissioned, it was the largest solar-plus-utility-scale-battery system in the state of Hawai‘i and one of the biggest storage systems in the world. The fully integrated solar-plus-storage project supports three vital scenarios in power distribution: it allows for solar generation to supply the grid while charging the battery system, it dispatches power stored in the battery system to the grid during peak demand periods, and it can dispatch solar and battery power simultaneously to answer spikes in demand or support the grid through the provision of ancillary services. At 11¢ per kWh, the PV Peaker plant provides energy well below the cost of diesel and helps KIUC eliminate the use of 3.7 million gallons of diesel fuel each year.

“AES analyzed projected 1-minute oil dispatch data provided by KIUC and developed an optimized ‘oil targeting’ load-following model that maximized the delivery of clean energy from the PV system, and minimized both total oil consumption and use of inefficient fuel peaking units. AES demonstrated that, through the optimization of fuel offset under a load-following model, a five-hour battery storage solution is not only feasible, but it can also deliver the highest value to the customer and the grid,” Rubin said.

The Lawa‘i project has the ability to simultaneously provide volumetric energy, frequency response, frequency regulation, and voltage regulation, which enables the grid to take full advantage of the technology’s capabilities, a prerequisite for mass adoption of firm renewables.

According to Rubin, conventional generation facilities have difficulty controlling voltage and frequency when restarting from a blackout due to the limitations of synchronous generators. AES’ PV Peaker plant has integrated fully solid-state inverters that can regulate voltage and frequency precisely, even under black-start conditions. Within normal operations, the batteries can charge without pulling any energy from the grid. The design allows PV to flow onto the grid through the inverter or directly to the battery system for storage. It also enables a combination of PV and stored energy to flow simultaneously through the inverter and onto the grid, balancing storage and PV energy seamlessly, and without interruption.

DC-Coupled Architecture a Key to Success

The DC-coupled architecture that AES designed with DC/DC devices allows for the best efficiency and delivery of renewable power. Rubin said the DC-coupled systems require no additional interconnection capacity and have up to half the fault current contribution to the utility.

“Because the multiple energy sources are on the input side of the inverter, there is no way for excess current to be injected to the grid, requiring simpler protection systems,” Rubin explained. “The architecture can draw from all energy sources at once, enabling even quicker fast-frequency response without the need for additional control coordination between devices.”

The architecture of the PV Peaker plant uses DC/DC devices on both the photovoltaic and battery systems, allowing the inverter to control power flow only, enabling smoother transitions between energy sources and higher equipment efficiency. Because all devices are connected to a common DC bus, the voltage is based on maximum efficiency rather than the battery’s native voltage, which also allows for the seamless integration of future equipment with a potentially different native voltage. Overall, the common DC bus means there are fewer conversion stages to move energy from the renewable source to the batteries, reducing conversion loss and increasing harvest.

Rubin said the marine environment, topography of the land, and permitting requirements presented unique challenges for construction, as well as for site and plant maintenance. Throughout the development and construction process, AES worked creatively and exhaustively to mitigate risks and address these challenges.

“AES performed numerous site studies, including archaeological biological surveys, wetland delineations, and a cultural impact assessment, to identify the impact of the project on the existing land and implement mitigation efforts,” Rubin said. “These efforts included performing site construction only during the day to avoid impacting Hawaiian seabirds, which fly over the island at night toward the ocean by following the light from the moon.”

As the property had previously been farmland, there was a desire to continue utilizing it for agricultural purposes. The site is home to Guinea grass, an aggressive and non-native grass, which can reach heights greater than 12 feet. The grass is not easily controlled with traditional vegetation management methods, so about 400 sheep from ‘Oma‘o Farms were brought in to graze the land (Figure 1), which was a win-win solution for the project and local farmers.

“Projects such as these could not be done on Kaua‘i without strong partnerships with landowners,” Bissell told POWER. “We have about 150,000 acres of agricultural lands on Kaua‘i, the vast majority of which are not in productive use. These projects allow landowners to put non-prime ag lands back into use, which reduces the pressure to rezone and sell off lands for other types of development.”

The site has four adjacent reservoirs, three dams, multiple ravines, and steep inclines of up to an 18% grade. Unique “two-up” single-axis trackers were selected to operate on the site’s steep slopes. At 7.5 feet tall when flat and 13 feet high when fully deployed, these trackers are twice as tall as standard single-axis units with elevated wiring, permitting free movement for maintenance operations beneath the array.

“While some utilities have viewed renewable mandates as a compromise to grid reliability and efficiency, the AES Lawa‘i Solar and Energy Storage Project was selected for Kaua‘i because it outperforms a standard fossil fuel plant,” said Rubin. “The PV Peaker plant not only provides the same dispatchability benefits as a traditional fossil fuel plant, it is also cleaner, faster, and more flexible and economical than any commercially viable alternatives.”

By providing roughly 11% of Kaua‘i’s power, the project has enabled the island to operate for short periods of the day entirely from renewables. It has boosted the island’s generation mix to 55% renewables, according to Bissell, and will help Hawai‘i meet its goal of reaching 100% renewable energy by 2045. Kaua‘i, however, may achieve that goal much sooner. KIUC expects to reach 80% renewables in 2025.