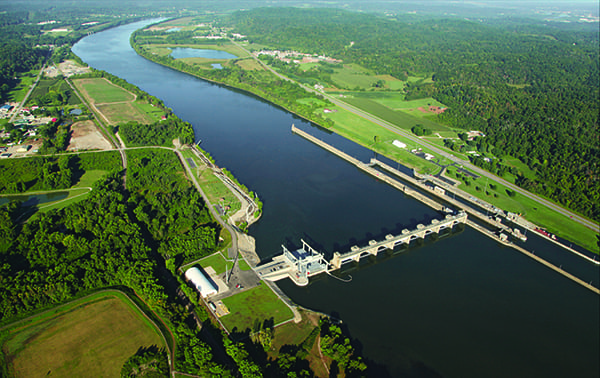 Successfully designing and constructing a hydropower plant, while accounting for site space constraints and not disrupting commercial traffic on a busy waterway, presented challenges for a Midwestern utility and the project’s engineers. It’s an example of how collaboration and innovation came together to ensure success. Photo courtesy: Stantec

Successful hydropower projects require a significant amount of planning, with a host of engineering challenges related to design, construction, and installation. Builders must account for natural features such as thrust faults and weathered bedrock; environmental concerns from runoff during construction; and the potential for flooding during high-water events.

Now imagine that, times four. That’s what American Municipal Power (AMP) did when it decided to add green energy, in this case hydroelectricity, to its portfolio to serve members across nine states. AMP contracted with MWH—now part of Stantec—to design and build four hydropower projects along the Ohio River, adjacent to U.S. Army Corps of Engineers locks and dams.

Capturing the power of the river was paramount; the design would need to maximize the low-head green energy potential at each site. The work also could not disrupt traffic on the river, which is second only to the Mississippi River in terms of commercial use in the U.S.

Building the Willow Island Hydroelectric Facility near St. Marys, West Virginia, was particularly challenging, as its design would differ from the other three plants due to its location on the river. It would have a smaller footprint, with space limited by an adjacent railroad. Construction trailers and large equipment had to be located off-site.

Ohio-based The Ruhlin Company was the lead contractor of the project. Excavation and cofferdam construction began in June 2011. Construction of the powerhouse got underway in December 2012. When Willow Island entered full commercial operation in February 2016, it was the culmination of a process that involved 485 workers at its peak, from several different companies with a wide range of tasks. Today the 44-MW plant provides clean renewable energy, and by providing grid stability also enables further development of intermittent renewable sources such as wind and solar to be built in the region.

Willow Island was built concurrently with three other AMP hydroelectric plants on the Ohio River. But Willow Island has a major difference: it has two bulb turbines (Figure 1) while the other plants— Cannelton (88 MW) near Hawesville, Kentucky; Meldahl (105 MW) near Maysville, Kentucky; and Smithland (76 MW) near Smithland, Kentucky—each have three.

Stephen Panozzo, Stantec’s project manager for Willow Island, told POWER that’s because “Willow Island is located upstream of the other three projects, and thus has somewhat smaller river flows because it has a smaller watershed. As you move farther downstream, there is additional runoff that contributes to the flow already in the river, so there is more flow available the farther downstream you go.”

Panozzo highlighted “a desire to keep the turbine-generators essentially the same size at the four projects due to economies through design, fabrication, and ultimately operation and maintenance through sharing of spare parts and the like.” He noted that AMP wanted “to take advantage of the flow range available at each of the sites using the desired machines, and through an engineering study it was determined that two was the optimum number of turbine-generator units at Willow Island.”

The plant’s turbines and generators were designed and built by York, Pennsylvania-based Voith Hydro. Panozzo said the “turbines have a guaranteed maximum output of 21.8 MW at a rated net head of 16 feet at a synchronous speed of 58.06 rpm,” and noted the guaranteed output at the best efficiency point is 12.6 MW.

“The two units are of the horizontal shaft, Kaplan-type runner, in the ‘bulb’ configuration, and are double regulated with adjustable runner blades and wicket gates,” he said. “Each turbine has three runner blades and 16 wicket gates, with a runner diameter of 7.7 meters, or about 25 feet. The generators have a nominal capacity of 23.72 MVA at a nominal voltage of 6.9 kV at 0.90 power factor. The rotor is a disk type with 124 poles and field windings mounted on the cylinder. Stator and field winding insulation systems are Class F materials, but operated at Class B temperatures to obtain longer life. The generator is provided with pneumatically actuated brakes and a brake dust collection system to minimize accumulation of brake dust in the bulb.”

Construction at Willow Island had plenty of challenges beyond the need to locate the construction trailers and store equipment off-site. Panozzo noted that having four projects underway concurrently “put a strain on the manufacturing and construction expertise,” though there was an advantage, as it “allowed the transfer of knowledge and skills to the next generation.” There also was the matter of competing for construction workers with other local industries, including oil and gas operations. 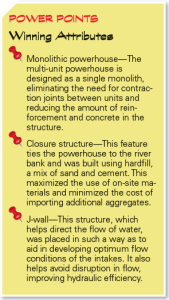 Construction of the cofferdam—and its removal—was just one of the particular challenges of building on a river. Said Panozzo: “The river level at Willow Island Dam is somewhat unpredictable, rising and falling with little warning. This proved challenging after the cofferdam was removed, although the powerhouse is designed to be overtopped during floods. During the final construction stage, the powerhouse hatches remained open to allow access to the turbine/generator equipment. Several times it was necessary for the contractor to demobilize its equipment from the powerhouse and install the roof hatches, sometimes with no more than a day’s notice.”

Pleasants County, in which St. Marys is located, is known for its rocks and sandstone boulders, as well as the steep terrain along the riverbank. In fact, in an area known as Raven Rock, before locks and dams were built on the river, riverboats often had to wait in the area when water levels were too low to navigate. Inscriptions, apparently written by river travelers waiting for the water to rise, dot many of the rocks along the bank.

“During rock excavation, a thrust fault was exposed along the riverside face of the powerhouse excavation,” Panozzo said, which meant rock bolts needed to be installed, and also called for the use of shotcrete. He said it was originally proposed that rock excavation for the foundation of the powerhouse, along with parts of the approach and tailrace channel extending into bedrock, would be done with conventional drilling and blasting. But after line drilling along the perimeter of the excavation was completed, the decision was made “to mechanically excavate rock using dozers, excavator with breaker, and rockwheel saws in lieu of drilling and blasting. In addition, an asphalt grinder was used to excavate or trim vertical and horizontal rock surfaces to final line and grade where the dozers were not able to rip rock surfaces within the required tolerances.” Large bulldozers eventually removed about 410,000 cubic yards of rock.

Panozzo said the Willow Island project provides power to 79 AMP-member communities. Its baseload generation ensures grid stability, allowing for more renewable energy sources such as wind and solar to be built in the region and connected to the grid. Panozzo said the clean energy plant offsets about 146,000 tons of carbon dioxide emissions annually.

And there are benefits beyond providing electricity. The project also is responsible for the addition of an access road, fishing piers, a picnic shelter, public toilets, concrete walkways, and parking lots as part of a 14-acre recreation area. And it should be supplying hydropower for years to come.

“This plant was designed with the next generation in mind,” Panozzo told POWER. “With routine maintenance it will run for at least 60 to 70 years, resulting in clean, reliable energy for our grandchildren.” ■