Two recent analyses of workforce issues—completely separate from each other—suggest an important linkage. One study, by Celerant Consulting (PDF) of Lexington, Mass., finds that an enormous amount of work time—typically more than half of the hours spent on the job—is wasted in the U.S. By structuring work to emphasize value-added activities over non-value-added job time, many firms could avoid downsizing in today’s business environment, Celerant concludes.

Also, a Conference Board study finds that "Americans of all ages and income brackets continue to grow increasingly unhappy at work—a long-term trend that should be a red flag to employers."

It strikes me that these studies may be connected. It seems reasonable that a work environment that involves mostly activities that are not directly related to the company’s mission, what Celerant calls "non-value add" (NVA) activities, yields job dissatisfaction. The consultants also identify a component of the workday that they describe as "non-value adding but required," such as employee break time.

Only Half of Work Hours Add Value

In an interview, Celerant’s Matt Marciniak, author of the study, explained the methodology. "We literally observe firms and people. We watch them and write down what they do on a minute-by-minute basis." What’s an example of non-value-add work? He cited a manufacturing firm where there is a job as an expediter. This is a person whose job is to make sure things happen when they are supposed to happen. "That is a complete non-value job," Marciniak said. "It’s a band-aid for processes that are not designed well."

Celerant treats this largely as a cost issue and sees improving the ratio of value-add to non-value add (wheel spinning) activity as a way "to improve operations, decrease monetary waste, and win the war against diminishing returns."

Assuming an average annual salary of $50,000, Celerant estimates that 2.45 days/week are spent on NVA activity, or an average employee cost of $24,501 yearly. The study suggests that better management can impact (eliminate) 57% of the NVA activities, saving $13,867/year.

The Celerant study also suggests that the America workforce is oversupervised. "Operators," by which Celerant means the men and women who produce the company’s good or services, "generate a stunning 50 percent more value than supervisors. Much of this is attributable to the fact that operators are in the trenches, and very little of their time is spent away from product development and delivery. Even so, that separation in NVA means that operators are 5.43 times more likely than supervisors to be participating in focused, value-adding tasks."

A substantial portion of human resources work in companies is aimed at identifying, hiring, and promoting the best and brightest. But poorly organized work environments can undermine those activities, says Celerant, noting that "having high quality talent does not automatically ensure the success of any business. Equal emphasis must be placed on training personnel and improving organizational processes to create a sustainably profitable business climate."

Which leads to The Conference Board report. This venerable business organization in a study last January surveyed 5,000 U.S. households, finding that "only 45 percent of those surveyed say they are satisfied with their jobs, down from 61.1 percent in 1987, the first year in which the survey was conducted."

The drop in job satisfaction over the past dozen years, says the report, "covers all categories in the survey, from interest in work (down 18.9 percentage points) to job security (down 17.5 percentage points) and crosses all four of the key drivers of employee engagement: job design, organizational health, managerial quality, and extrinsic rewards." The survey results are summarized in the figure. 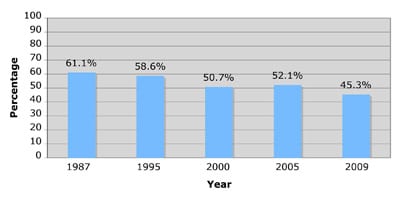 U.S. worker job satisfaction has declined. Source: The Conference Board

Is this growing job dissatisfaction just a function of today’s dicey job market? Not so, says The Conference Board’s Lynn Franco, "While one in 10 Americans is now unemployed, their working compatriots of all ages and incomes continue to grow increasingly unhappy. Through both economic boom and bust during the past two decades, our job satisfaction numbers have shown a consistent downward trend."

Here’s where the Celerant and Conference Board work appears to me to be coming together. Says The Conference Board’s John Gibbons, "Challenging and meaningful work is vitally important to engaging American workers. Widespread job dissatisfaction negatively affects employee behavior and retention, which can impact enterprise-level success."

Notes Celebrant: "loosely defined roles, undefined expectations, and ineffective practices create a chaotic and frustrating daily work experience with a great deal of lost time. Implementing a simple architecture with clear accountabilities is the first step in breaking this cycle, and each new role must be aligned with measurable expectations and supported with the tools necessary to achieve them."

In my experience, workers are smart and see what is going on around them. They generally want to contribute to the success of the enterprise and want to see where they are adding value to the company’s outputs. When they sense they are spending time on worthless activities, they may tend to view their jobs as worthless.

Celerant’s Marciniak largely agrees. "I hear managers repeatedly say, ‘people are our most important resource.’ But if the most important resource is only adding value 50% of the time, that’s a problem. If that was a raw material, the firm would not be in business very long. There is a disconnect between the statement and the behavior. When people are adding value, they will be more satisfied" with their jobs.